Mark Milligan has picked up little nuggets of wisdom from every manager he’s played for – even the bad ones. But as he prepares to begin his own coaching career in the coming months, there’s one example that towers above the rest.

Ange Postecoglou is poised to blaze a trail for Australian coaches in world football in the same way Mark Viduka, Harry Kewell and Tim Cahill once did for players. Milligan hopes to one day follow in his footsteps, all the way to the top. 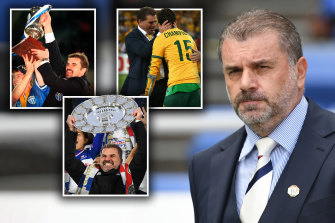 Ange Postecoglou has won trophies wherever he has been. The Celtic job would be a just reward according to those who know him.Credit:Getty

The former Socceroos captain, who announced his retirement from professional football on Wednesday, played under Postecoglou for both the national team and at Melbourne Victory. He also knows the lay of the land in Scotland quite well after a season at Hibernian a few years ago.

Milligan can see absolutely no reason why Postecoglou won’t be a raging success at Celtic, where he is expected to be unveiled as their new manager in the coming days.

Milligan, 35, hasn’t been surprised by the seemingly venomous opposition to the move from the Hoops fanbase, who had their hearts set on former Bournemouth boss Eddie Howe before talks crumbled at the final hurdle.

Most Celtic supporters have spent the last few days wading through Wikipedia, YouTube and years-old news articles to scrub up on Postecoglou’s background, and have come away largely unimpressed because of his low profile and minimal European experience – which amuses Milligan to no small degree.

“Celtic are fortunate that they’ve identified him. It’s good to see that someone has woken up. This should have happened years ago.”

He expects they’ll soon come around. “I don’t think it’ll take long for the Celtic fans and the people of Scotland to understand what he’ll bring, and what the team will be about,” he said.

“I haven’t worked under him for a long time but I’ve got a fair idea from working at both club and international level of the way he works. It doesn’t look like that’s wavered over the last few years, the way his Yokohama [F. Marinos] team play. Giving him the quality of player that Celtic provide is only going to enhance his reputation.”

Ante Milicic, Milligan’s coach at Macarthur FC, is prepared to be even bolder about the prospects of a man he once said gave him his “PhD in football” as his Socceroos assistant.

“Celtic are fortunate that they’ve identified him,” Milicic said. “It’s good to see that someone has woken up. This should have happened years ago. This is delayed, simple as that. 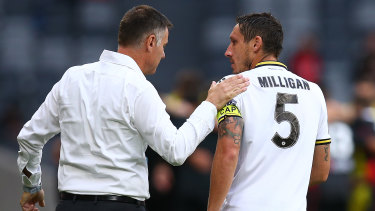 Ante Milicic and Mark Milligan will be working even closer together next season on Macarthur FC’s coaching panel.Credit:Getty

“Working with the guy and knowing what he can do and how he can mesmerise a playing group, it’s fascinating. He has such a strong and clear way of playing that you know how it’s going to end up.

“For him to be given a chance in Europe, that’s what he’s waited for in the background as the right opportunity. I’m excited, because he’s the one Australian coach who can give Australian football its place on the world map.”

Milligan anticipates the hard-working and receiving nature of Scottish footballers will be a good fit for Postecoglou, who needs immediate buy-in from the dressing room to help impose the ultra-attacking style of play that has won him trophies at every level, and rave reviews from Premier League managers Pep Guardiola and Brendan Rodgers.

The obsessive, maniacal nature of Scottish football, particularly the Old Firm clubs in Glasgow, might take more of an adjustment.

“They’re very, very passionate. I know Tommy Rogic still has problems going for a coffee and stuff like that,” Milligan said. “They’re the places you want to be as a footballer, that environment, that fanatic attitude towards the game. Celtic’s fans and the history of that club is not rivalled by too many. You see the passion and what it means to them. If you’re able to be a part of it and better it, it’s a wonderful place to be.”

As for his own aspirations in football, Milligan’s vision for how football should be played mirrors that of Postecoglou. Positive, front-foot play, heavy on possession and plenty of goals.

He will become an assistant to Milicic at the Bulls next season, with the club having formulated plans last year for him to eventually succeed him as A-League coach. There’s no rush on that front – Milligan is still completing his coaching badges, having recently completed his B Licence in Australia.

The biggest lesson Postecoglou ever taught him, he said, was that no player is ever the finished product. There is always room for improvement, and it takes hard work to bring it out of them. But the results, as Postecoglou showed with technically-limited players at South Melbourne, Brisbane Roar and the Socceroos, can be breathtaking.

“You just have to be willing to take the time to not just tell them what you want but to show them and teach them,” Milligan said. “Especially in Australia there’s a lot of negative talk, there has been for a long time, that you can’t do certain things and that’s just not the case.

“If Ange goes there he’ll bring a brand of football that the UK will enjoy and that will open doors down the track, maybe start to get rid of the stigma of what we are and what we’re about. We’ve adapted and changed as well as a footballing nation.”