Home » Soccer » Which stars make it into this week's Premier League POWER RANKINGS?

Haaland and Alvarez sparkle in attack for Man City, Sterling a bright light on a bad night for Chelsea and Mitrovic cannot stop scoring – but which other stars make it into this week’s Premier League POWER RANKINGS?

4. Martin Odegaard (up one)

The first midweek round of Premier League fixtures threw up plenty of goals, intrigue, joy and despair, with some particularly eye-catching results.

Arsenal continued their perfect record with a 2-1 win against Aston Villa, Manchester City stayed hot on their tail with a 6-0 thrashing of Nottingham Forest and there was also late drama in Liverpool’s comeback 2-1 win against Newcastle.

Southampton shocked Chelsea 2-1, with Manchester United’s revival under Erik ten Hag continuing with a third straight win, beating Leicester 1-0, but Brighton lost their unbeaten run after a 2-1 loss against Fulham.

Crystal Palace and Brentford, West Ham and Tottenham, and Leeds and Everton played out 1-1 draws, with Bournemouth grinding out a goalless stalemate against Wolves.

City pair Julian Alvarez and Erling Haaland both impressed in the rout of Forest – but who else caught the eye from an individual perspective across the midweek round of fixtures?

The opening-day win against Aston Villa – who themselves now lie second bottom of the table – had evaporated for Bournemouth.

Since then, the newly promoted Cherries had lost 4-0 against City, 3-0 against Arsenal and then 9-0 against Liverpool. Manager Scott Parker was then sacked.

So with the scoreline locked at 0-0 against Wolves on Wednesday, the clock ticking down, and the visitors putting massive pressure on at Dean Court, they needed someone to step up and stand tall.

Enter Lloyd Kelly. After a lovely move involving Joao Moutinho and Raul Jimenez, Daniel Podence nodded it back across goal, past the goalkeeper Neto and… Kelly diverted it away on the line. A match-turning intervention.

On such moments seasons can turn. Yes, it was only a goalless draw and a single point against a team themselves struggling for form. But it showed captain Kelly and Bournemouth will not lie down that easily in this season’s relegation battle. 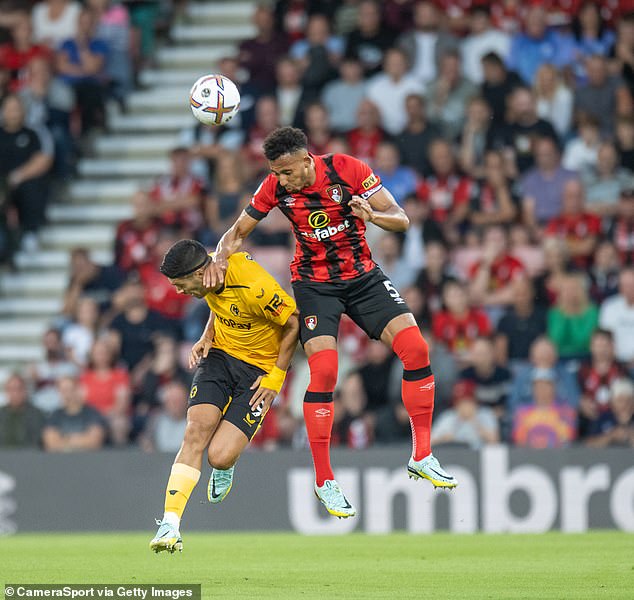 It’s already a bit of a love story for Romeo Lavia down on the south coast.

The 18-year-old Belgian has already settled in so quickly into a central midfield starting spot that manager Ralph Hasenhuttl felt comfortable to sell stalwart Oriol Romeu.

Lavia’s goal, the equaliser in a spirited 2-1 win against the Blues, was two touches in two seconds which oozed class. One to set, one to ping it beyond Edouard Mendy and into the bottom corner.

News of the teenager’s injury, potentially out for six weeks with a muscle strain, will be a blow – his partnership with James Ward-Prowse is already blossoming. 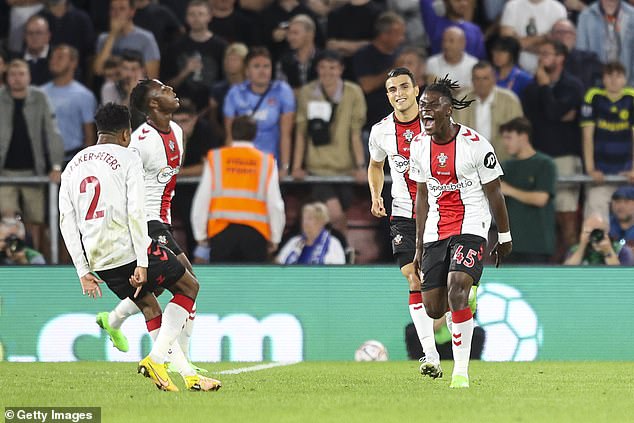 Despite no attacking returns this week, Luis Diaz was his usual livewire self, running around like a Duracell bunny.

Sure, he could have been more clinical with his handful of chances. But you’re not going to score a hat-trick every week (unless you’re Haaland), and his movement and pace often gets him into goalscoring positions others would never reach.

How Tottenham and Manchester United wish they could have signed him.

Odegaard is Arsenal’s conductor, their metronome.

Everything flows through him and he can take a considerable amount of credit for their total of 13 goals so far in just five matches – the third-most in the division behind City and Liverpool.

Of course, Gabriel Jesus, Gabriel Martinelli and Bukayo Saka are contributing too. But the Norwegian is the one who keeps things ticking over, who allows the others to flourish.

He is undroppable at the minute in the team top of the league. 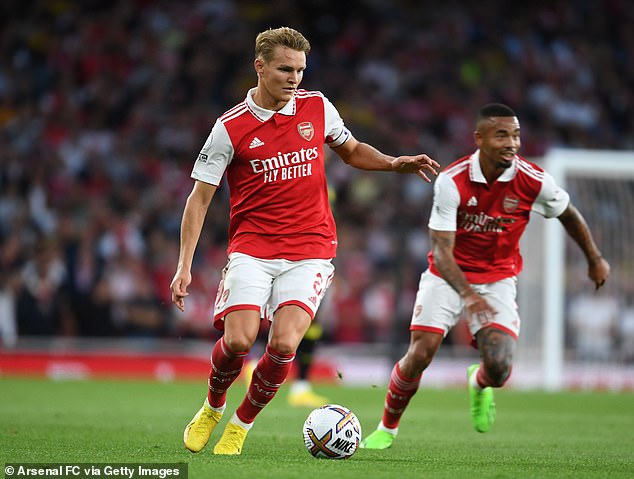 Ahead of you in the Man City attacking pecking order are: the brilliant Phil Foden, the dazzling Riyad Mahrez, £100m man Jack Grealish, and freak of nature Erling Haaland. Oh, and Kevin De Bruyne and Bernardo Silva can play in a front three too.

Welcome to Manchester, Julian. The Argentine had played less than an hour of Premier League football across the champions’ first four games. But given a chance to start against Forest, the 22-year-old delivered and then some.

His first goal was neat and tidy and precise. His second was a sledgehammer, boomed into the top corner with his weaker left foot like a Chris Gayle maximum.

Perhaps appropriate, then, that it was that strike which hit Forest for six.

Guardiola had previously said he would happily rotate Haaland for Alvarez. The Spaniard would scarcely have said the opposite – but now he knows he can swap out the Norwegian with no worries about how the former River Plate star will adapt. 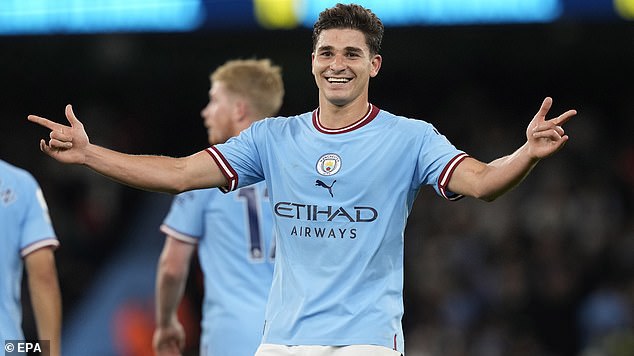 Harry Kane received the ball about 35 yards away from his own-goal on the half-turn. He fed it to Dejan Kulusevski and, at that point, Tomas Soucek had about a 10 yard headstart.

By the time Kulusevski had cut into the box, Kane had passed him on the overlap. He picked up the Swede’s (delicious) pass and his cross was so precise that West Ham defender Thilo Kehrer almost had to score the own goal.

Had he left the ball, it was almost certain Son Heung-min would have netted.

It was far from Spurs’ most fluent or most cutting-edge attacking performance. But one moment of brilliance from Kane was enough for a point.

Things are cooking for Raheem Sterling at Chelsea now. Three goals in the last two weeks, and a new central role seems to suit him under Thomas Tuchel.

Admittedly, the team aren’t at their top level – losses against Southampton and Leeds sandwiched by a narrow win against bottom side Leicester prove it – but Sterling is a rare chink of light for Tuchel right now.

A beautiful turn against Mohammed Salisu nearly conjured up a goal and his finish was coolly taken.

Were it not for the club’s disappointing defence he could have been the match-winner. 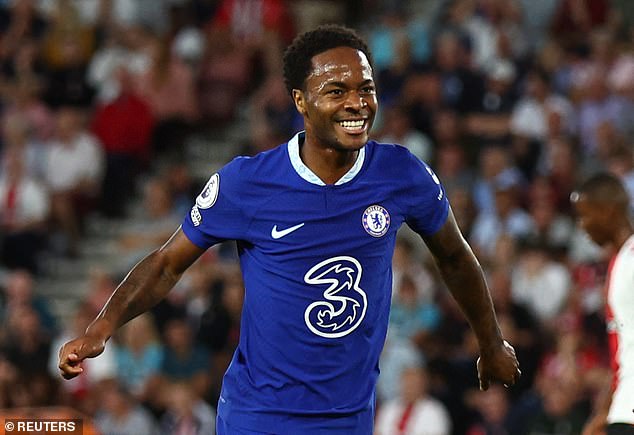 The strapping Serb is a massive problem for Premier League defences at the moment.

A double against Liverpool – including a penalty he won by dribbling past Virgil van Dijk – followed by strikes in his last three games in succession put him second in the Golden Boot race, behind only Haaland.

He took his goal against Brighton clinically and his move to dispossess Pervis Estupinan, start the counter-attack and find Andreas Pereira, who would eventually cross for Lewis Dunk to score an own goal, was clever.

Not just a big strong target man – Mitrovic is finally proving he can cut the mustard at Premier League level. 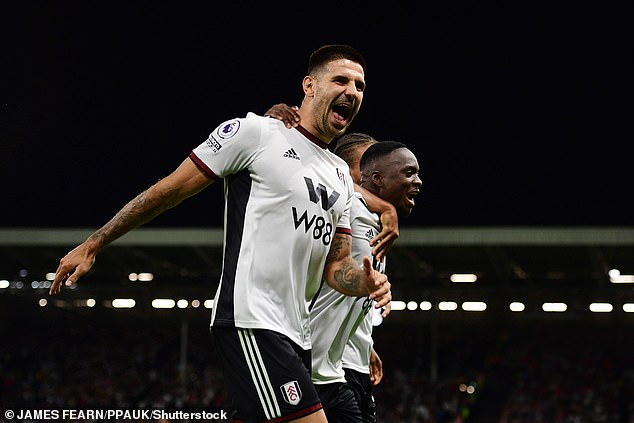 Only he can make it look so easy. Running on to Mo Salah’s pass, some may have leant back and smashed it over. Some may have cut across the ball and bobbled it wide. Some might have gone for power and found the arms of Nick Pope.

Not Bobby. The brilliant Brazilian unleashed his samba magic once again, passing the ball effortlessly into the bottom corner and beginning the Liverpool comeback which would see them snatch all three points at the death.

He also nutmegged Newcastle defender Jamaal Lascelles with his shot, just to make it even sweeter.

Firmino is now into his second century of goals for the Reds – how many more can he get? 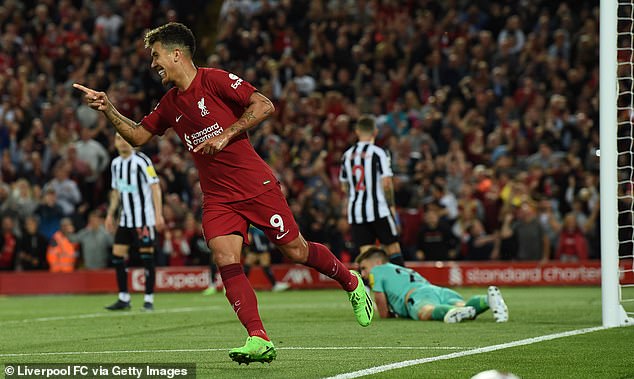 The perfect hat-trick for, seemingly, the perfect player.

We were thinking about putting someone else in the top spot, but Erling scored a 27-minute hat-trick – one left foot, one right foot, one header – to help dismiss Nottingham Forest.

You wouldn’t bet on it. 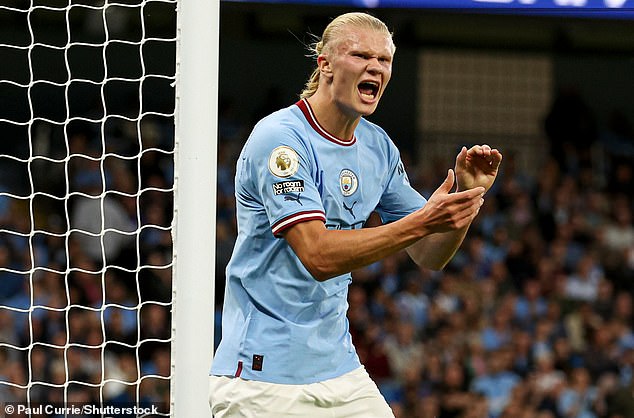 Who else? The Manchester City front man looks to be in a league of his own with nine goals