France’s 2010 revolt resulted in a group-stage exit, Holland imploded at Euro 96 after wage row and remember when Ireland lost their CAPTAIN before the World Cup – pre-tournament feuds NEVER bode well, so could Mbappe and Giroud’s bust up cost Les Blues?

France may be the tournament favourites for Euro 2020 but all is not well among the current world champions.

Kylian Mbappe and Olivier Giroud helped spearhead Les Bleus to 2018 World Cup glory in Russia but fast-forward to three years and their is a simmering tension between the duo.

Mbappe was reportedly left feeling unconvinced by Giroud’s apology after the Chelsea striker criticised his performance in France’s 3-0 win over Bulgaria on Tuesday night. 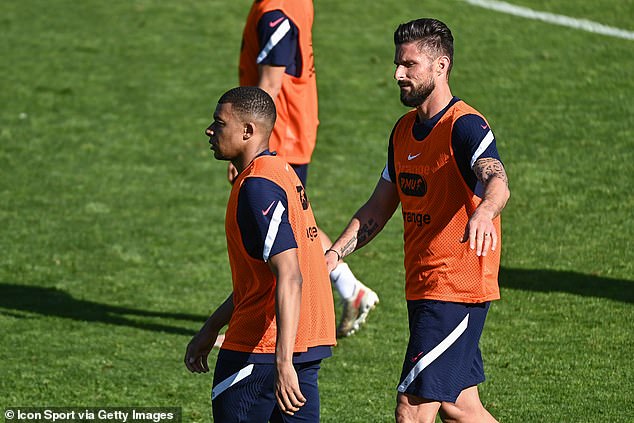 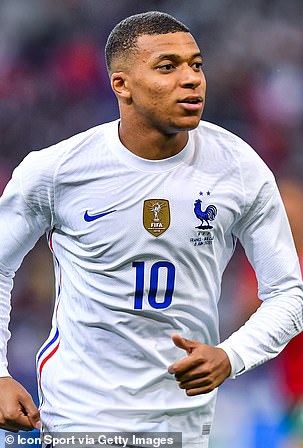 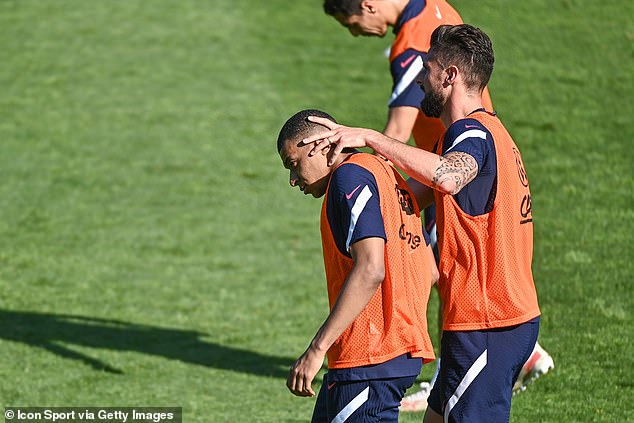 Giroud came off the bench to score twice in the final 10 minutes of the match but in his post-match interview aired his frustrations over the number of passes he received from his team-mates.

According to RMC Sport, Mbappe was so livid at Giroud’s comments that he wanted to give a press conference on the matter but this was rejected by France manager Didier Deschamps.

The outlet now claims Giroud attempted to clear things up with Mbappe in Thursday’s training session but that the Paris Saint-Germain star remained hostile.

Giroud is said to have admitted his words ‘ran away with him’ and that his comments were directed at a number of players but it doesn’t appear to have sufficed for Mbappe. 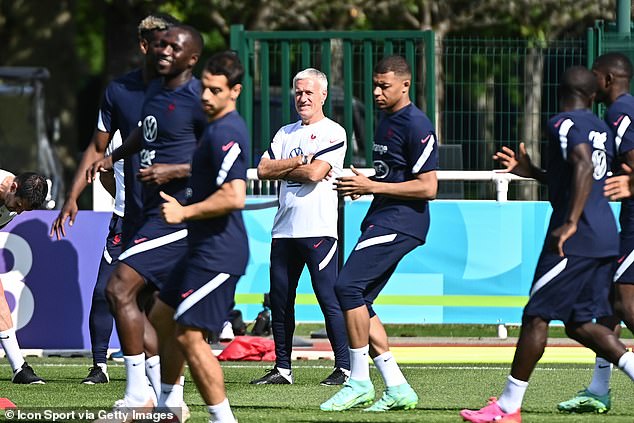 After the victory over Bulgaria, Giroud told reporters: ‘Sometimes you make the runs and ball is not arriving. Perhaps we could have found each other better, there it is.’

With France in the Euro 2020 ‘Group of Death’ (they face Portugal, Germany and Hungary in Group F), Deschamps knows he has to quell this tension in order to not disrupt the harmony of his squad.

Sticking with France, this isn’t the first time that there has been an issue among one of their squads going into a tournament.

In 2010, the French scraped through to the World Cup in South Africa via a contentious goal scored by William Gallas – which Thierry Henry handled in the build-up.

And once Les Bleus reached South Africa, they duly imploded as they crashed out of the tournament at the group stage. 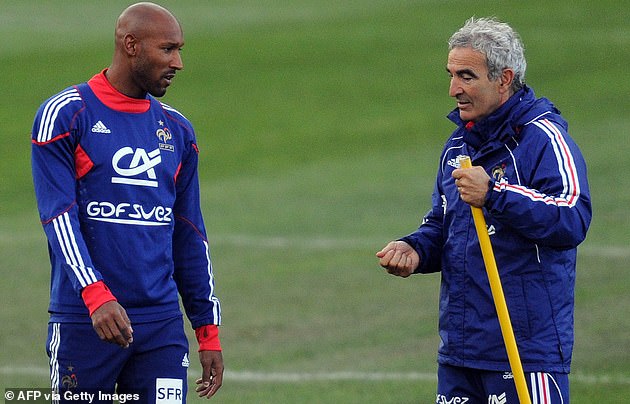 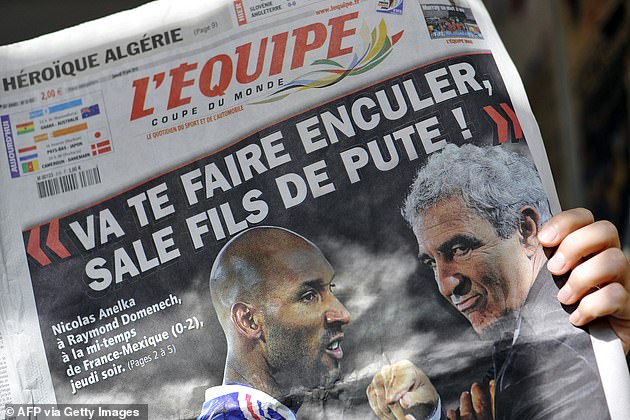 Nicolas Anelka, a striker never afraid to speak his mind, was at the heart of the squad mutiny as his team-mates got behind him after a fallout with manager Raymond Domenech.

After a goalless draw with Uruguay, things took a turn for the worse during the 2-0 defeat by Mexico in the second group game after Domenech had burst into the changing room and singled Anelka out for criticism after a lacklustre first half.

It was claimed by French newspaper L’Equipe that Anelka told Domenech to ‘go f*** yourself you son of a w****’ during the dressing-room row.

That has since been proven to be untrue with both Anelka and Domenech refuting that controversial front-page headline.

Anelka said: ‘I was frustrated going into the locker room. I was thinking to myself “I’m not getting the ball, I’m not finding a solution. We’re playing badly, it’s 0-0 and we still haven’t scored”. 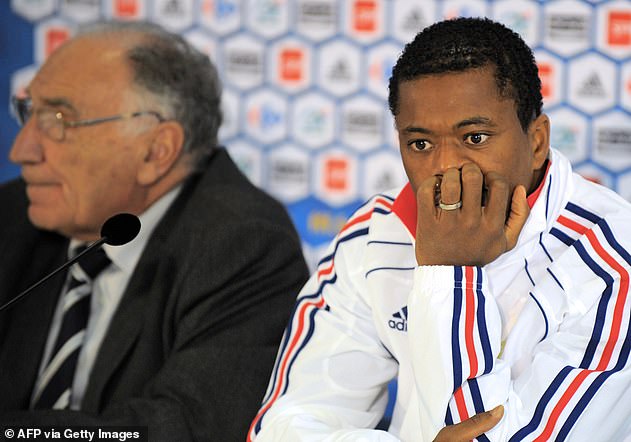 When Anelka refused to apologise the day after, he was sent home from South Africa and that prompted mass protests from his team-mates who refused to train.

The initial plan was for the French team to take the bus up to the training pitches but not get off.

But Evra later realised it was a public session and instead opted to get off, sign autographs for fans and then got back on the bus. 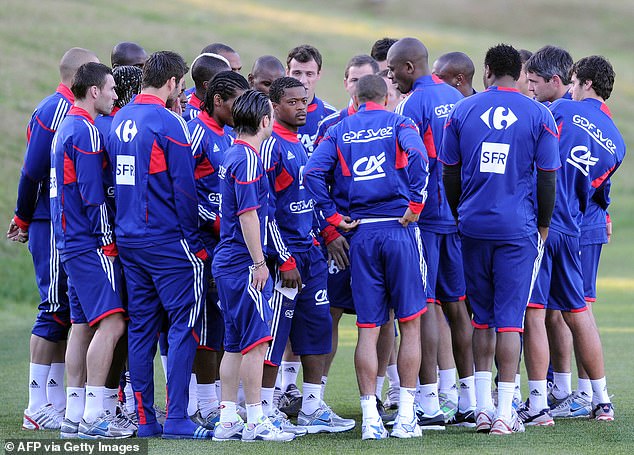 As the chaos unfolded in front of the world’s media, Domenech had to separate Evra and fitness coach Robert Duverne during a heated argument.

Back on the bus, the players shut the curtains to have showdown talks with Domenech who later came and read out a statement on behalf of his squad to the press.

The French Football Federation’s managing director subsequently quit in a fit of rage and the team finished bottom of their group with just one goal and one point from three matches.

Anelka never played for France again and finished on 69 caps and 14 goals for his national team. He was given an 18-match ban for his role in the mutiny.

Domenech was later replaced by Laurent Blanc, who suspended all 23 members of the World Cup squad for his first game in charge. Evra was banned for five matches, Franck Ribery for three and Jeremy Toulalan for one for their roles in the chaos. 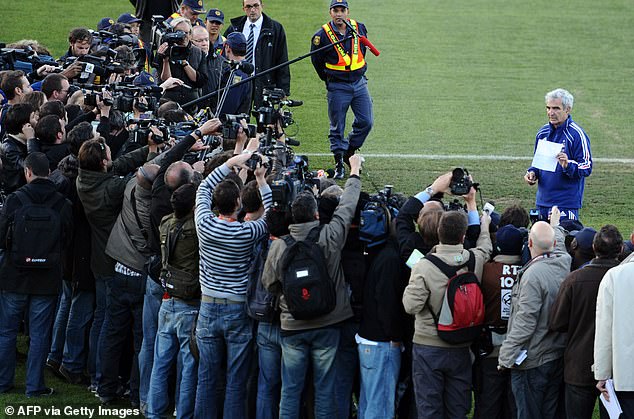 The Republic of Ireland hadn’t qualified for a a major tournament since 1994 but ended that hoodoo eight years later by securing a place at the 2002 World Cup in Japan and South Korea. However, before they even kicked a ball in Asia they were without their talisman and captain Roy Keane.

Not one afraid to speak his own mind, Keane stormed out of their base unhappy with their facilities.

Mick McCarthy’s squad were in Saipan, Japan and Keane compared their base to ‘like a car park’. 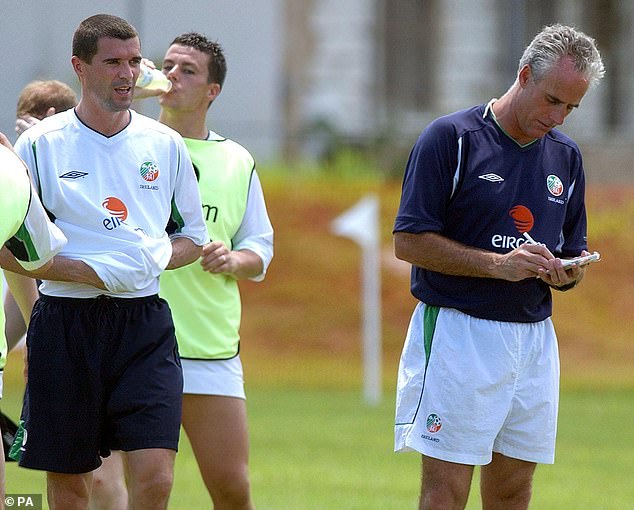 Roy Keane (left) was dismissed from the Republic of Ireland’s World Cup squad in 2002 in Saipan, Japan after a huge bust-up with manager Mick McCarthy over their training facilities

Having initially walked out on the squad, Keane was persuaded to return but things soon turned very ugly. After expressing his concerns once more, this time to the Irish Times, McCarthy decided to confront his captain in front of all the playing and coaching staff.

McCarthy wanted clarification for his comments which read: ‘You’ve seen the training pitch and I’m not being a prima donna. Training pitch, travel arrangements, getting through the bloody airport when we were leaving, it’s the combination of things. I would never say “that’s the reason or this is the reason”, but enough is enough.’

Keane didn’t step down from his stance and as the argument escalated he launched into a 10-minute tirade about his manager.

The outcome? Keane returned home and missed out on the World Cup as his team-mates reached the last 16 before losing on penalties to Spain. 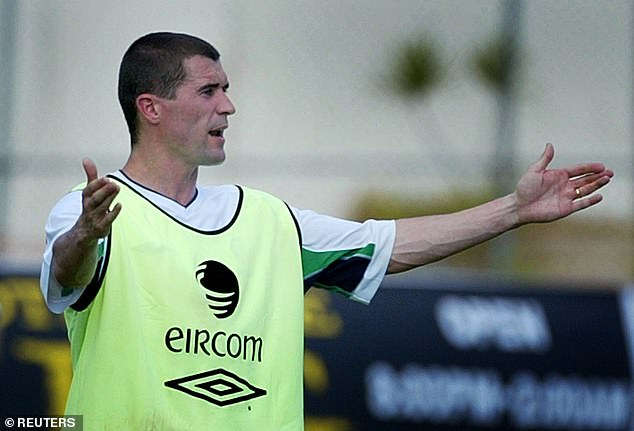 Holland qualified for Euro 1996 via a play-off win over the Republic of Ireland – and in truth that’s about as good as it got for Guus Hiddink’s side.

The Dutch are best remembered for being thumped 4-1 by hosts England during that Euros before losing on penalties 5-4 to France in the quarter-finals. 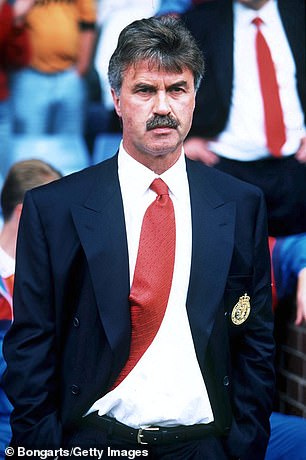 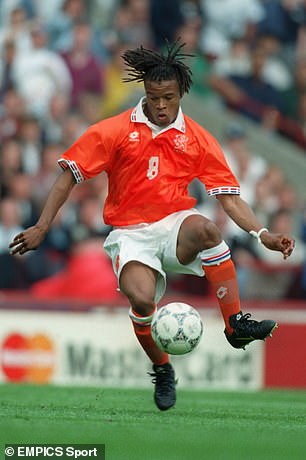 With such a big Ajax contingent within the Holland, you’d have thought that would have aided team chemistry, right? Wrong and how very wrong indeed.

There was an underlying tension among the Dutch squad though as Reiziger, Kluivert and Davids were irked at being on a lower pay scale than Ajax’s older heads: Blind, De Boer and Van der Sar. Seedorf fell into the former category too, despite having left Ajax for Sampdoria and now at this point Real Madrid.

The problems within the camp started started after their 2-0 win over Switzerland in their second Group A game when Davids informed Hiddink that he was ‘too deep in the a** of Danny Blind [the captain]’ after he played the final 10 minutes of the victory as a substitute. Davids was then promptly sent home by Hiddink.

Before Davids departed, these issues then became a gaping wound when a photograph that apparently captured a racial divide was taken. Sitting on one table were all the black players within the Dutch squad (Reiziger, Kluivert, Davids, Seedorf and Bogarde) alongside one white player, Richard Witschge, who had to sit there too because of a shortage of tables.

Hiddink stood up to say no photographs but the picture was taken to exacerbate matters. 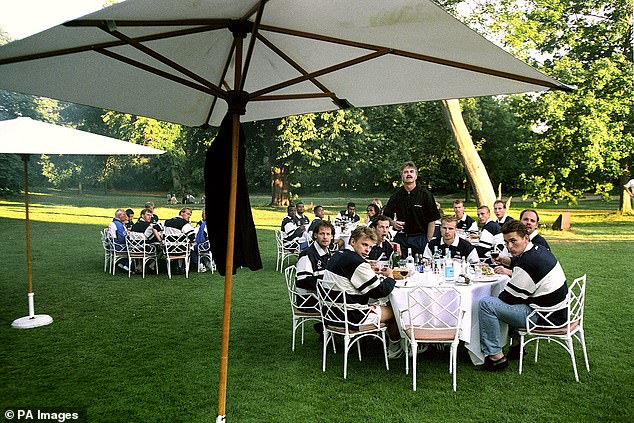 Slovenia qualified for their first, and so far, only World Cup in 2002 – but that tournament was overshadowed by the fallout between manager Srecko Katanec and talisman Zlatko Zahovic.

Trailing 1-0 to Spain, Zahovic was upset at being substituted for Milenko Acimovic (then at Tottenham). Slovenia would then go on to lose 3-1.

Just days later, in extraordinary scenes, Katanec broke down during his press conference as he detailed his feud with Zahovic – citing the tensions between the areas they grew up in Slovenia. Katanec is from the country’s capital, Ljubljana while Zahovic heralds from the eastern region of Styria. 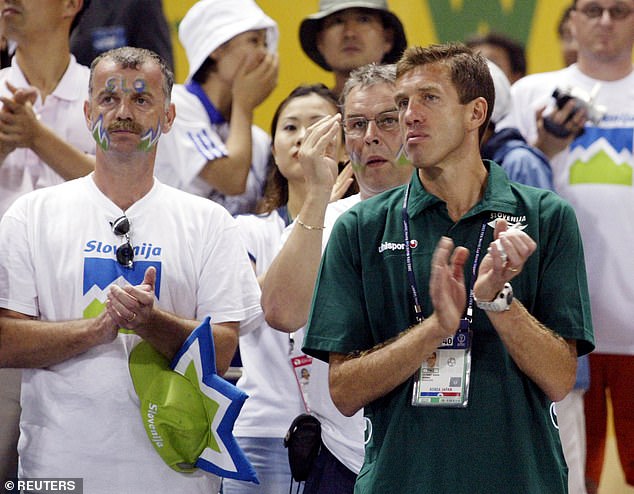 ‘There were things going on during the game,’ Katanec told the assembled press.

‘[Zahovic] said I was a Ljubljanska P—[he broke off from an expletive]. He said I was subbing only Styrians and I should take another one off so that another Ljubljancan could play.

‘So now you know what happened.’

Despite this, incredibly Zahovic wasn’t sent home from the squad. That was until the Slovenia Football Federation intervened when Zahovic spoke out about the incident. 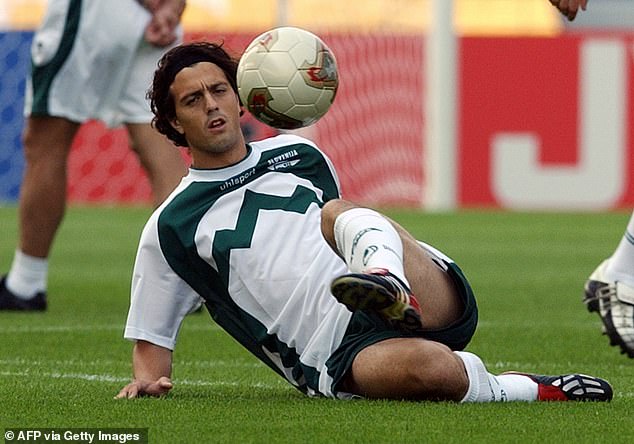 ‘People who dig a hole for others often end up falling in that hole themselves,’ he told an impromptu press conference later that day at the team’s training camp on the island of Jeju.

‘Yes there were hard words exchanged, but I never mentioned [Katanec’s] parents or their nationality. This has been going on a long time. He wanted to provoke my reaction from day one of the preparations.’

Slovenia duly finished bottom of Group B – losing all three of their matches.

The most recent example on our list stems from the 2014 World Cup in Brazil with Ghana.

Going into their final Group G match against Portugal – the Black Stars knew they needed to win to have any chance of progressing to the last 16.

However, before kick-off their preparations went into chaos as the squad threatened to take strike unless they were paid their team bonus of $3m (£1.7m). It took the personal intervention of president John Dramani Mahama to see the bonuses paid and for the strike to end. 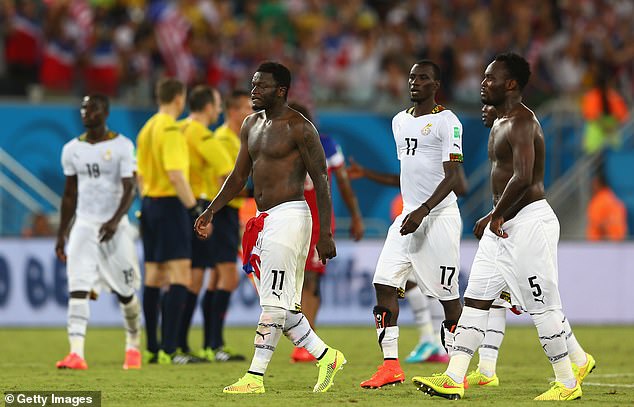 This wasn’t the end of the issues though as just before the Portugal match, integral duo Sulley Muntari and Kevin Prince-Boateng were sent home from the Ghana squad.

A furious row had broken out between James Appiah, the manager, and Kevin-Prince Boateng leading to the latter making ‘vulgar verbal insults’, according to the Ghana Football Association (GFA).

Ghana FA executive committee member, Moses Armah, ended up in a physical altercation with Muntari – claiming he was provoked into hitting him after being slapped twice by the midfielder.

Armah claimed that Muntari tried to go back at him a third time before he was intervened. However, a few minutes later an incensed Muntari got up, took hold of the Armah’s three mobile phones and laptop, and smashed them on the ground, damaging them in the process.

This was far from ideal preparation for the Ghanaian team and they duly lost 2-1 to Portugal to finish bottom of Group G with just one point. 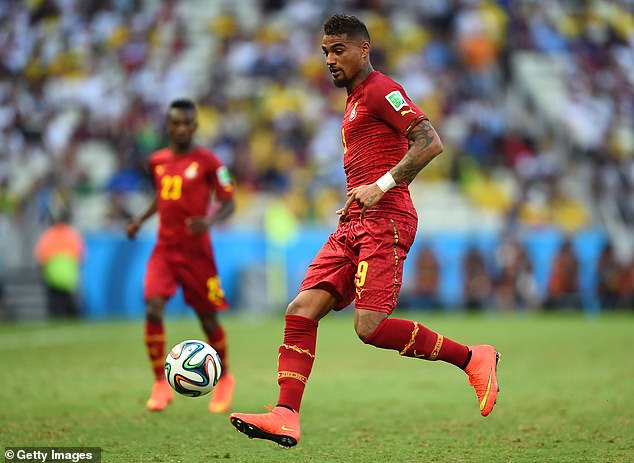 Just before the Portugal game, Kevin Prince-Boateng was one of two Ghana players sent home