West Ham 1-1 Tottenham: London derby finishes all square as Tomas Soucek rescues point for Hammers by cancelling out Thilo Kehrer’s own goal at the London Stadium

This London derby for the realists came with evidence that West Ham are not nearly as bad as their early results might have suggested and Tottenham are not quite the finished article.

Which is more or less what the two managers have been at pains to point out. Antonio Conte told Spurs fans to dream but not without requisite warnings about the long road ahead and room for improvement.

David Moyes has been busily trying to lift spirits after defeats against Nottingham Forest and Brighton by hailing an exciting future for the Hammers after a busy summer in the transfer market. 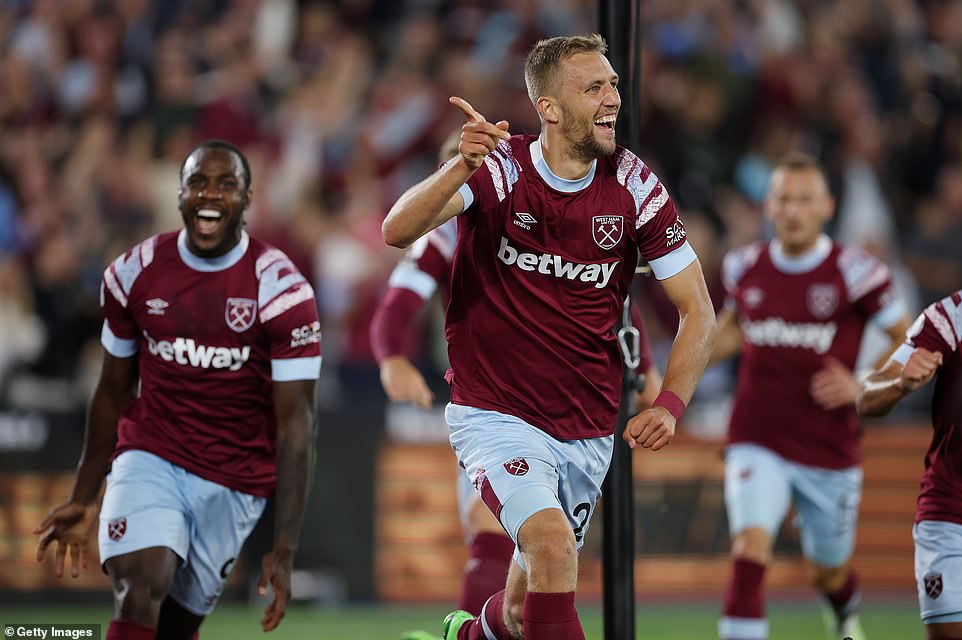 Some of those expensive recruits were on display, including £54million playmaker Lucas Paqueta, who came on for his debut and offered flashes of his technical class despite not training with his new team.

Paqueta also endeared himself to his new public by picking up a yellow card for booting Richarlison, his fellow Brazilian whose appearance from the Spurs bench coincided with a marked deterioration in cordiality.

It was one of Moyes’ old warrior, however, who rescued a point. Tomas Soucek who earned a point for the home team after they slipped behind to a first-half own goal scorer by Thilo Kehrer.

West Ham were the better team for large parts of the contest, finding their rhythm in the second half and were pushing hard for a winner as it ticked through closing stages which became increasingly fraught. 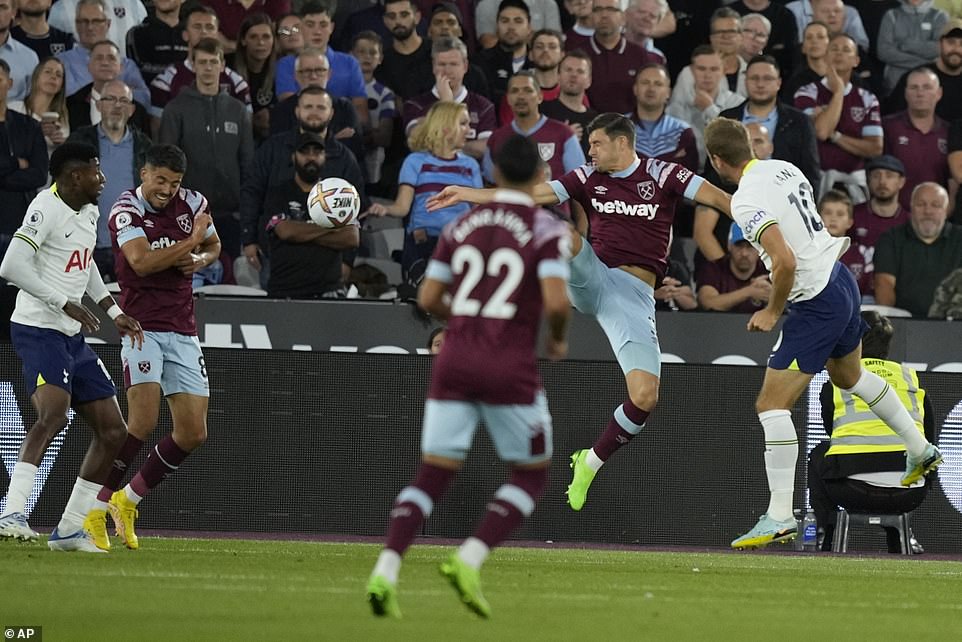 The home crowd roared their team on, and Bowen was agonisingly close with a volley at full stretch from a tight angle in stoppage time, but Spurs resisted, rode their luck and remain unbeaten. West Ham will take encouragement.

The game was barely 10 minutes old when controversy was stirred into the usual derby mix.

Ivan Perisic crossed and Harry Kane climbed at the back post, heading the ball into the arms of Aaron Cresswell as he challenged.

Immediately, Referee Peter Bankes pointed the spot but VAR Stuart Attwell put the brakes on proceedings as he rewound the video clips. It took four minutes before Attwell advised Bankes to consult the pitchside monitor. The tension increased as Conte remonstrated and the fans grew impatient.

Then Bankes saw what Attwell had seen. Kane’s header struck Cresswell on the head first and then deflected into his arms and the referee revised his decision. Who knows why it took so long but there was no penalty to the delight of the home crowd and the frustration of the visitors.

“To make a mistake behind the monitor is incredible and difficult to accept,” fumed Conte, claiming Cresswell had spread his arms deliberately and still annoyed by the decision not to send off Nottingham Forest’s Steve Cook for hand ball on the line against Spurs on Sunday.

“I don’t like to comment on referee’s decision but I comment because his decision was right. I said to him at the end of the first half, with a smile, not blaming him, ‘you’ve taken the right decision’. 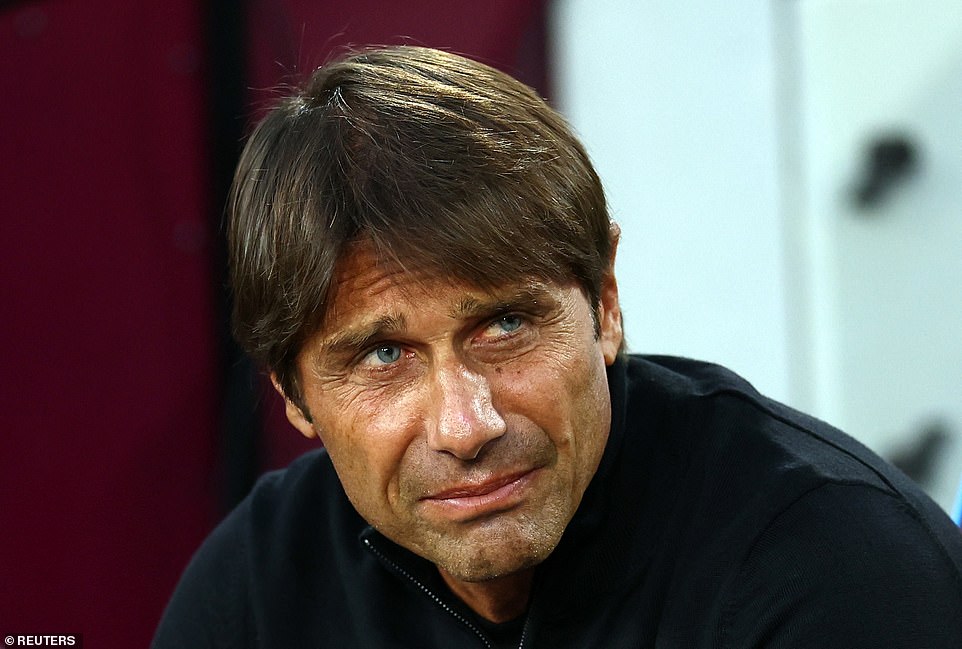 “The VAR embarrassed the referee, to make him change the right decision was strange. In England you have to learn much more to use VAR in the right way. Study well and be more accurate.”

Moyes accepted the incident proved a turning point because his team improved after the long interruption.

“VAR hasn’t always gone in our favour but tonight it helped us,” said the West Ham boss. “We didn’t start well and it gave us a jolt, a chance to go again.”

Hugo Lloris, on the 10th anniversary of his arrival at Tottenham, had already denied Pablo Fornals and made another fine save to beat away a thumping volley from Declan Rice.

Then Michail Antonio, starting up front with new £30m stirker Gianluca Scamacca unwell, curled a shot against a post. 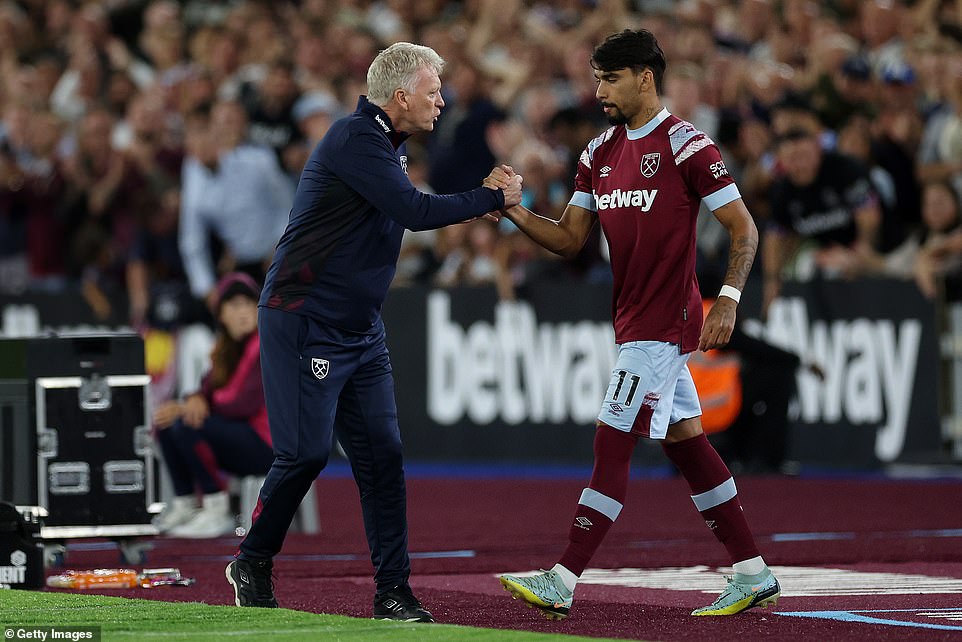 West Ham were on top and performing with confidence, which can be perilous against Conte’s team, seldom more menacing than when slicing out of defence on the turnover of possession.

And so it proved. Nine minutes before the interval, Rice charged forward, searching for a one-two with Said Benrahma but Eric Dier stepped in and, won the ball and the Spurs sprang out.

Dejan Kulusevski led the counter attack, advancing at pace to find Kane on a well-timed overlap on the right. Kane’s low cross was bound for Son Heung-min when Thilo Kehrer intervened and turned it into his own net.

Having conceded a penalty on his Premier League debut against Brighton, it has been a difficult start for Kehrer in London.

Once ahead, Spurs can be difficult to unpick, but West Ham generated a quicker tempo at the start the second half and were soon level from quick throw-in, turned on to Soucek by Antonio. 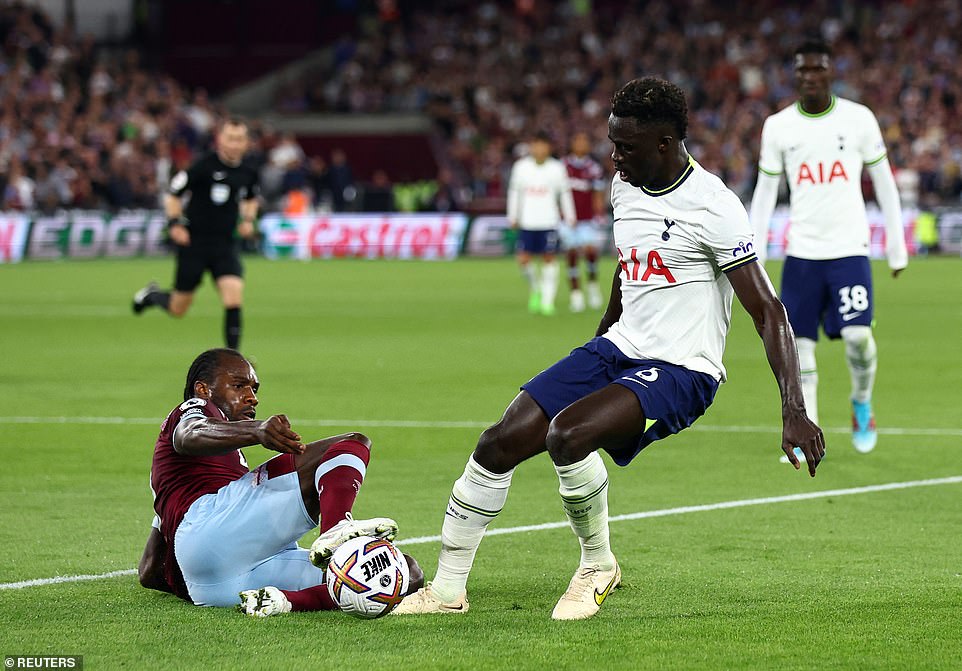 Soucek took one touch on his left thigh and smashed his second touch past Lloris on the half-volley with his right foot. It was a fabulous goal and no more than Moyes’ team deserved for their enterprise.

On top again, they went after the second. Bowen went close when Persic and Lloris were hustled into mistakes as the visitors tried to pass their way out of defence.

With the crowd up and the stage set, Moyes sent on Paqueta and finished with a flurry but there would be no winning goal and, ultimately, nothing between these London rivals.