So much has changed in the 18 months since the Socceroos last played. And yet on the eve of the team’s long-awaiting World Cup qualifying return, the message from coach Graham Arnold remains the same: Australian-based players aren’t getting nearly enough football.

The Socceroos will face Kuwait on Friday morning (AEST) in the first of four games they will play over 13 days to complete the current round of qualifying for the 2022 World Cup in Qatar. 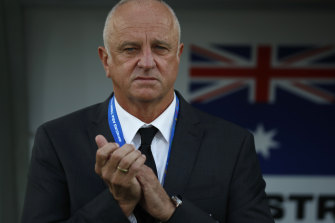 Graham Arnold says the A-League season needs to be longer if the Socceroos are to improve.Credit:AP

Arnold struggled to find the words to describe what it meant to be back on the training pitch with his players after the longest break between fixtures for the national team in more than 50 years.

But asked to measure the improvement of players like Harry Souttar and Riley McGree, who have enjoyed breakout campaigns in the English Championship, and Ajdin Hrustic, who is plying his trade in Germany’s Bundesliga, and Arnold knew exactly what to say: the same thing he has repeated ad nauseum throughout the pandemic, having closely studied Australia’s fractured development pathways.

“I know we’ve talked about this many, many times before but in Australia we don’t play enough football,” Arnold said.

“Harry Souttar, this year, has played 46 games. How do you get better at your trade? 46 games. 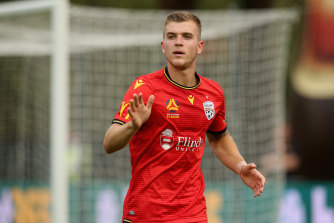 Riley McGree is a “different specimen” since leaving Adelaide United for Birmingham City, according to Graham Arnold.Credit:Getty Images

“Riley McGree is a completely different footballer today than when he left Adelaide. [He’s] like a different specimen. That’s down to the amount of games he’s played in the Championship and playing for 10 months of the year, not six months.”

Last week, the Australian Professional Leagues signed a new five-year broadcast deal with Network Ten, but the early indications are that the number of matches played per season in the A-League will stay at 26 – two full home-and-away rounds, and a handful of games left over. In contrast, the Scottish Premiership, which like the A-League has 12 teams, plays a 33-game season.

It is unlikely to change until the A-League expands to 14 teams, but Arnold said it was simply not enough to ensure the improvement of Australian players.

“I think it’s at least six or seven games too short,” he said.

“If there’s 12 teams, three times 11 is 33 rounds, plus the finals series and FFA Cup – all of a sudden you get up to around 40 games and we’re getting closer to players playing overseas instead of not training and players having long off-seasons.

“The APL will do what they do, but for me it’s all about match minutes and being able to play the game longer. I’m not the decision maker, but you’re asking me the difference between the players – Ajdin Hrustic, all these kids – and it’s all around match minutes.”

Arnold is set to roll out a different-looking starting XI for the clash with the world No.148-ranked Kuwait, featuring predominantly players from European clubs who were able to fly out early for a training camp in the UAE. He confirmed Fran Karacic, who has been a regular in Italy’s Serie B with Brescia this year, will start at right back.

Despite naming a 31-man squad, Arnold’s selection flexibility will be limited initially because some players arrived late – including Melbourne City trio Jamie Maclaren, Curtis Good, and Connor Metcalfe, overseas-based strikers Adam Taggart and Nikita Rukavytsya, and Blackpool’s newest hero Kenny Dougall, who scored two goals at Wembley to seal their promotion from League One to the Championship.

“It’s a wonderful feat that Kenny’s achieved,” Arnold said. “An Australian scoring two goals at Wembley is just incredible, two great finishes as well. He’s really put himself in the picture to make a debut for the Socceroos.” 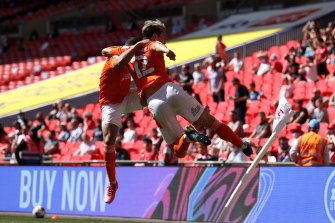 Kenny Dougall celebrates one of his playoff goals at Wembley.Credit:Getty Images

As for the next Socceroos captain, Arnold is unlikely to appoint a permanent successor to Mark Milligan during this international window due to his need to cycle through his squad, and said the armband would likely rotate through several players.

Australia sit clear on top of Group B with an unbeaten record, and are heavily favoured to win all four remaining fixtures against Kuwait, Chinese Taipei, Nepal and Jordan. 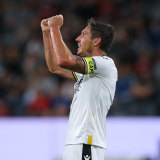 Mark Milligan will retire from professional football at the end of the A-League season.Credit:Getty

“We’re starting from scratch,” Arnold said. “Yes we’re in a good position at the moment but we’re not talking about the past. We’re only talking about the present and what’s now, and that is Kuwait. I expect to win every game and expect to be on top of that group after those four games.”

Meanwhile, former Socceroos captain Mark Milligan – the last active player from Australia’s famous golden generation – has confirmed he will hang up his boots for good at the end of Macarthur FC’s inaugural A-League campaign.

Milligan, 35, has played in all bar one of the Bulls’ matches this season and scored their first goal in their opener against Western Sydney Wanderers in late December.

Capped 80 times for Australia and a member of four World Cup squads, he retired from international football in 2019, and will shortly pursue a career in coaching as one of Ante Milicic’s assistants at Macarthur.

“I am forever grateful for the experiences I have been offered through the game both for club and country,” Milligan said.

“I am honoured to have been able to represent Australia on multiple occasions and my time with the national team will stay fondly in my memories forever. I am excited to see what the game has in store for me going forward.”