As Aaron Ramsdale prepared to sign for Arsenal, Sheffield United were given a brutal reminder of what they will miss as West Brom extended the Blades’ miserable start to the Championship season.

In the battle between two of last season’s relegated clubs, Ramsdale’s replacement Michael Verrips endured a dreadful evening in goal. The visitors could not handle Albion’s threat from set pieces, with Valerien Ismael’s side storming to victory through Jack Robinson’s own-goal and further strikes from Dara O’Shea, Alex Mowatt and Callum Robinson.

Ismael left Barnsley to take over at The Hawthorns over the summer and his team resemble Tony Pulis’ Stoke side when they were promoted from the Championship in 2008 – long balls, long throws and deadly free-kicks and corners, roared on by an enthusiastic home crowd. 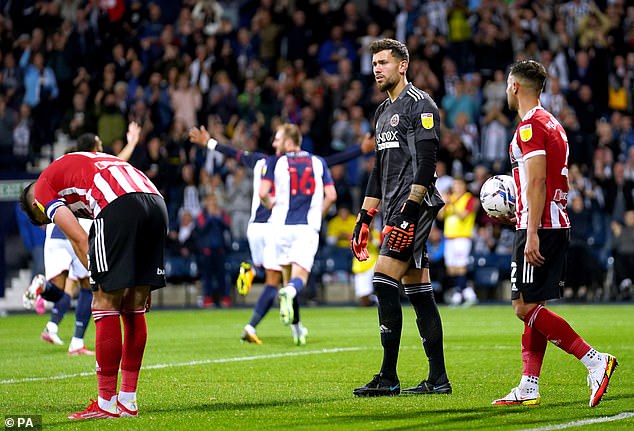 These fans did not care much for Pulis by the end of his spell here yet they are far happier about Ismael’s direct football – and why not when these are the results?

Albion have seven points from their opening three matches and have scored nine goals. By contrast, the Blades have yet to score in the league since Slavisa Jokanovic took charge and have only a single point.

With Arsenal’s £30million bid for Ramsdale accepted, Jokanovic chose Verrips and he was picking the ball from his net inside a minute.

Darnell Furlong’s long throw was nodded on by Matt Clarke and former United forward Robinson turned in the loose ball – but from an offside position.

Robinson was thwarted again by the linesman’s flag in the 15th minute when he sent a close-range volley beyond Verrips. 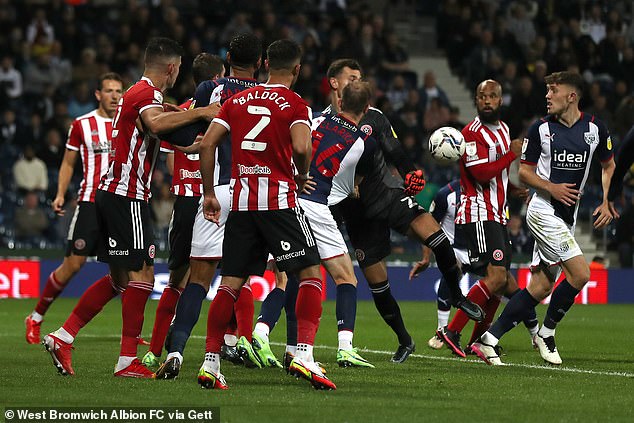 At the other end, Dara O’Shea made a superb challenge to deny Billy Sharp before Albion took the lead in the 26th minute.

Once more, Furlong’s huge throw caused the damage as Robinson rose to head it clear but could only divert the ball beyond Verrips. United should have been level instantly when Sharp sent David McGoldrick clear, only for the forward to shoot wide with just Sam Johnstone to beat.

McGoldrick’s frustrations bubbled over soon after when he was lucky only to booked for pushing his finger into Furlong’s face.

Furlong was nearly as effective from corners as throw-ins and from another excellent delivery, Kyle Bartley headed wide from six yards. 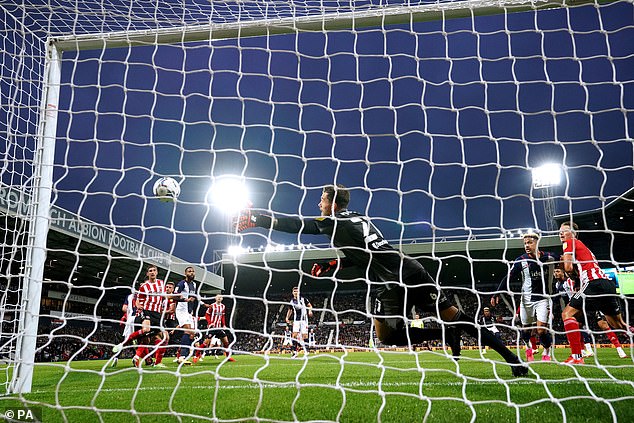 Albion maintained their rhythm after the break and quickly doubled their lead. Verrips made a hash of Mowatt’s corner, fumbling it twice, and O’Shea prodded in the loose ball. Mowatt soon made it three when, after winning a loose ball in midfield, he ran on to Karlan Grant’s pass and produced an assured finish.

Verrips and the visitors’ defence simply could not handle Albion’s threat from set pieces and Robinson got the goal his performance deserved on the hour mark. With Verrips nowhere, Bartley flicked on another Furlong throw and Robinson steered in from two yards.

Albion goalkeepe Johnstone had had a quiet night yet was still alert enough to push away John Egan’s header with 18 minutes remaining. Soon afterwards Furlong flung the ball goalwards again and this time Verrips managed to claw away Bartley’s header.