Watford captain Troy Deeney says he feels “tremendous pride” for everything he has achieved at the club after bringing his 11-year spell at Vicarage Road to an end.

The 33-year-old’s contract was due to expire at the end of the season, but Watford have agreed to let him depart as a free agent.

Deeney is now set to join his hometown team and boyhood club Birmingham after agreeing a two-year deal – with the option for a further 12 months – with the Championship side.

In an emotional statement announcing his departure, Deeney thanked Watford for helping to “get me back on track when I was at my lowest ebb”. He served three months of a 10-month prison sentence for affray in 2012.

Deeney wrote: “It’s weird being asked to express my feelings on my life at Watford Football Club and the emotions I feel about leaving a club so important to me.

“I feel sadness and loss, almost like a close family member has just died. I feel excitement about my new journey and the rest of my life.

“Most of all I feel tremendous pride for what I’ve achieved and the friendships and connections I’ve made. Watford literally has changed my life.

“The Watford family redeemed me and helped get me back on track when I was at my lowest ebb.

“Watford is a small part of planet earth but for some of the most turbulent years of my life it was the centre of my universe and I couldn’t have wished for better supporters holding me up and I have been truly honoured to be the captain of that club and the fans’ representative on the pitch.

“While there is always some frustration when a great journey comes to an end, that will quickly pass and what will remain are great memories that will become the pillars of my life from now on.

“Last but certainly not least to the fans – you have been amazing and I can’t say anything less than I love you guys from bottom of my heart.

“You’ve taken me into your hearts and I can never repay you. This is now my club forever and I hope you know I left everything on the pitch.” 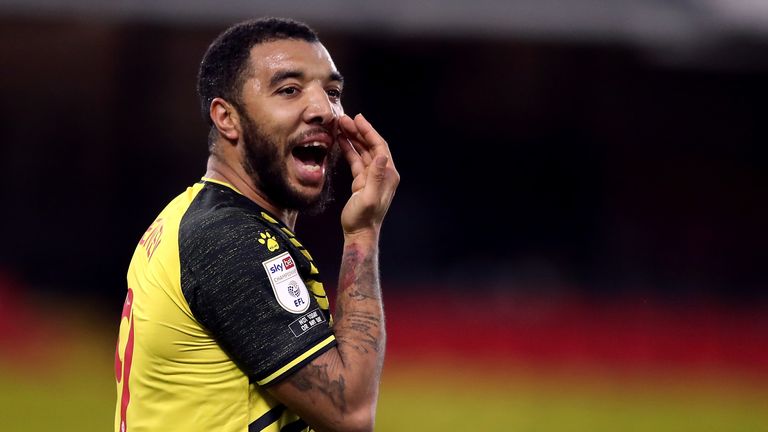 Speaking to Watford’s website, chairman and chief executive Scott Duxbury said of Deeney: “Through the many highs and the occasional lows, Troy Deeney’s name has been inextricably linked for 11 years with Watford Football Club.

“I believe we have been good for him and I know he has been incredibly good for us.

“For my own part I reflect, as chairman and CEO, on a very positive and mutually respectful relationship with Troy where we’ve always sought to find outcomes that achieve success for the club and everybody associated with it.

“This hasn’t always been easy, but if you know Troy like we do, then you’ll know the easy option would never had led to the success we’ve enjoyed together.

“He has shared the low points and the extraordinary high points of the club’s journey under the ownership of the Pozzo family, including creating moments that will last a lifetime in the memories of all Watford supporters – none more so than ‘that goal’ in May 2013.”

Time is running out for clubs to do business – the summer transfer window closes at 11pm in England and midnight in Scotland on Tuesday August 31 and you can follow all the Deadline Day drama with Sky Sports.

Follow all the latest transfer news and rumours in our dedicated Transfer Centre blog on the Sky Sports website and app, check out the latest Done Deals and watch the best analysis and reaction on Sky Sports News.