Everton great Trevor Steven has already had the chance to interview Carlo Ancelotti. The pair even played against each other when England faced Italy at the 1990 World Cup. In conversation at the club’s training ground, the two are on the same side now.

“Carlo is the man,” Steven tells Sky Sports. “If you could have sculpted someone to fit the bill, he is that man. He oozes credibility, a great man-manager. Every player who has ever played for him loves him. When players love you then they will be happy and play well.

“I was surprised when he joined Everton but I did not know him. I just saw him as a big-club person. But now I have got to know him a bit better, I know that he is a footballing man from a footballing social dynamic, not the glitz and glamour that everyone sees.

“He loves where he lives, walking the beach with the dogs. He is a normal person. It was an opportunity to chat. We spoke much longer than we did on camera. He wants to be there long term and I hope he is because that means Everton will be successful as a club.”

Steven knows better than most what it takes to succeed at Goodison Park. He was an integral part of the greatest Everton side of them all, winning two league titles, playing in four FA Cup finals in five years and a hero of the 1985 European Cup Winners’ Cup win.

A veteran of four tournaments with England who went on to play for Rangers and Marseille, Steven is 57 now and has been living in Dubai for many years. But the recent Howard’s Way film celebrating Everton’s success in the 1980s has reconnected him with the region.

“That brought us all back. Coming together for the film gave us all an opportunity to reengage with the club. It relit the fires of passion you have for your football club. When you have been away for 30 years like I have been, that gets tucked away in the psyche.”

When Everton host Burnley on Saturday game, more memories will come flooding back. Turf Moor was where it all began, his talent spotted by the legendary Peter Kirkley at Wallsend Boys. He was driven down in a minibus from Berwick-upon-Tweed to Burnley.

From the age of 12, that was where he spent his school holidays. “I only ever went to one club and that was Burnley,” says Steven. “I never wanted to sign for anyone else.”

He was part of their third division title-winning team at 18, playing almost 100 games for the club while still a teenager. “Burnley was a great learning curve. I was very light, new to the scene. I played central midfield then too. I got all that experience under my belt. Relegation back to the third tier prompted new boss John Bond to sell Steven in order to raise funds. The youngster was spotted by Howard Kendall on one of his many scouting trips to Turf Moor. Steven still recalls their first meeting at the Tickled Trout hotel near Preston.

Accompanied by his wife-to-be’s hairdresser, Jack Pollard – “he said he knew the Manchester United chairman Martin Edwards” – Steven wanted to seem professional. “He said nothing and knew nothing, just sat in the corner,” he recalls with a chuckle.

Kendall left a bigger impression. “He was such a charismatic personality. There was no messing with him. He was smiling, cheerful, positive. I gave him a lot of questions. I wanted to know what he saw me doing, where I would be playing, whether I would be in the team.

“I had played 100 games. I did not want to go and be second string. He told me he was going to play as a right-sided midfielder in a 4-4-2. I thought I could do that. I wasn’t really bothered. If he had told me I was going to be goalkeeper I would have signed anyway.

“This was the promised land for a lad of 19. You could feel it when I went to Goodison that morning. There was nobody else there. The grass was growing. It was summer. But Howard wanted me to get a feel for what this looks like, what it feels like walking out the tunnel.

“Now I was going to see if I was good enough.” 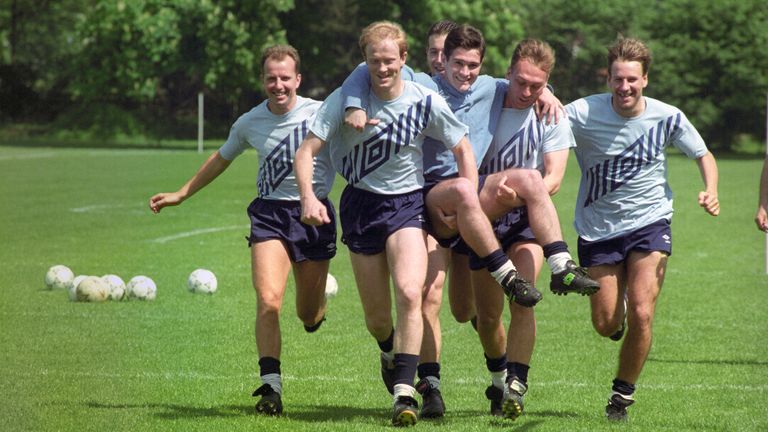 It is difficult to imagine now given the success that was to come in his six-year stay on Merseyside but Steven endured a difficult start – not helped by his own misguided attempts to prepare for pre-season by training in the blistering heat of Mallorca while on holiday.

“I could not train, I was bedridden for four days with sunstroke.

“It was the worst possible start. I had lost all this weight.”

It was little better for Kendall with his team struggling to gel. “He was a hair’s breadth from being sacked. Nobody was playing well, everything was off, and there was a lot of pressure on me to do something. I was also playing a position that I was not used to.

“I wasn’t enjoying it, nobody was.”

But a goal from Adrian Heath against Oxford kept Everton in the League Cup and the team went on a roll. Steven, who had been dropped, was recalled to the side and started to show what he could do. He provided an assist as Everton won the FA Cup.

What followed was an extraordinary period of success delivered by an extraordinary group of players under the expert guidance of Kendall. “Brave people, on the pitch and off the pitch. Great work ethic and attitude. And a great goalkeeper in Neville Southall.”

A young and hungry group – “I was bought for £300,000 and still living in digs” – Everton were harrying the opposition long before talk of pressing from the front in an era when they could still pass it back to the goalkeeper. That first title win was a true team effort.

“I think there were six of us who scored 10 or more goals that season. We were just a well-oiled machine. We attacked teams, we were brave, we made runs. You talk about the high press, we used to press teams and win it back all the time. That was just what we did.”

Steven has fond memories of the away trips spent listening to the Born in the USA album by Bruce Springsteen that was Everton’s soundtrack to the season. Momentum was with them.

“Everyone listens to their own music now but this was a different animal. This was hairs standing up on the back of your neck as you are getting towards the ground. The doors open and you have still got it blaring. You take it with you. That drive and hunger.”

In Europe, Bayern Munich were overwhelmed with Steven among the scorers. “They had Lothar Matthaus, Dieter Hoeness and Klaus Augenthaler but we deserved to beat them.” 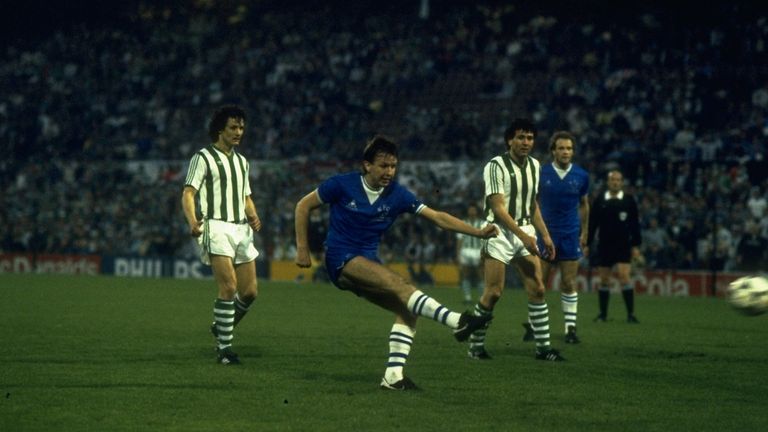 Rapid Vienna were beaten in the final of the European Cup Winners’ Cup with only an FA Cup final defeat to Manchester United denying Everton an historic treble. “It was too much. We did not get back until Thursday and travelled to Wembley the next day.

“That is probably one of the big regrets. That win would have sealed it beyond our wildest dreams. There was only one step beyond that and that was to win the European Cup.”

That, of course, remains the thorniest of subjects among Everton supporters and that particular group of players. The European ban that followed events at Heysel in 1985 denied Everton their chance to compete in the European Cup. Momentum was lost.

“Talk about being nipped in the bud,” says Steven.

“It is almost like having cold water thrown on you. Putting out a fire.

“That team had all that togetherness and belief in each other, which was then dampened by what happened with the European ban.

“That was my career peak. We were going to be playing against Barcelona and the rest. Instead, nothing. That is five years of my career. The whole career is from 18 to 32 so a five-year ban for your best years, there is not much time.

“Maybe we would not have done what we think we would have done. But we had the right manager, brilliant support and great players. We would have attracted the best.

“We were used to winning.” 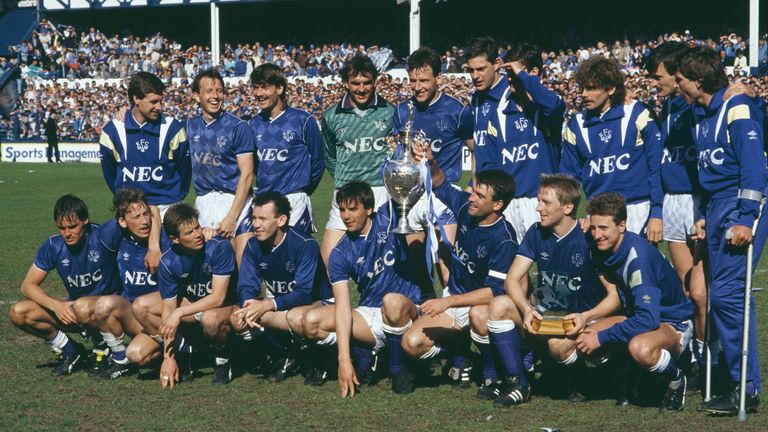 Steven’s career with the club came to an end in 1989 but he is among a number of former Everton players of that era putting his time to good use now. That special bond between the fans and their heroes has only been strengthened by the activism of key figures.

Southall is an ambassador for mental health and LGBT issues. Peter Reid regularly holds the government to account on issues affecting working-class people in the community.

“Neville has been very vocal for quite a long time on social media. Peter has his finger on the pulse regarding government and good causes. I like to understand the issues myself.”

Steven is now a mental health ambassador himself, working with Causeway Technologies, whose chief executive Phil Brown helped fund the Howard’s Way film. It has taken him on his journey of discovery regarding the scale of the problems people are facing.

“We are doing a variety of projects to amplify the noise around suicide, depression and anxiety. It is a disease that is rife and the stigma is the problem. People would rather suffer in silence than speak. So what we are trying to do is to break that silence.”

The People’s Place has been constructed in conjunction with Everton in the Community in the hope of helping people to open up. “The badge means a lot to people. It is a badge of trust. When you see the badge above the door, you feel like you are going to see family.

“We hope that other clubs will use Everton as a blueprint.

“I find it all very humbling.”

That connection with Everton restored, Steven is hoping he can see the club win some silverware again soon. He has no doubt that Ancelotti is the right man to deliver it.

“He is having to grind, it is not perfect. But the players who had been underperforming their level in recent years are now going above and beyond that. Obviously, Dominic Calvert-Lewin has come on leaps and bounds but look at Michael Keane and Tom Davies too.

“He has stuck by Jordan Pickford. You want that from your manager. He is that heavyweight anchor at the centre of the football club. It is fantastic to see. He is the perfect man for it. The results are good. If he can win a trophy that would be unbelievable.

“I hope it happens under Carlo because you could not meet a nicer man, but the important thing is that they are in the fight and that is what the Everton fans want. Give them that and they will back you. If you can give them a trophy too then you will go in the history books.”