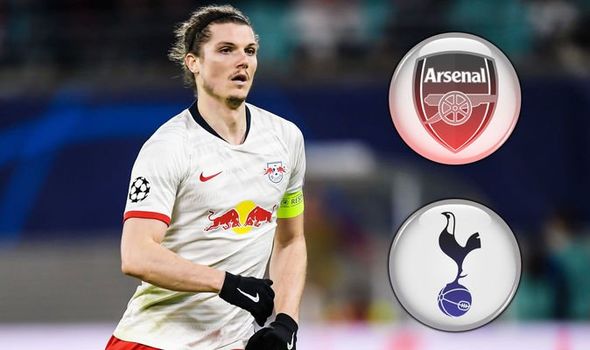 Arsenal and Tottenham are targeting Marcel Sabitzer after his impressive performances for RB Leipzig in the Champions League. Sabitzer led the Bundesliga giants to a stunning 3-0 win over Spurs in north London as he scored a brace in just 11 minutes.

I was delighted to follow him to Leipzig. He has a great esteem for me, I trust him a lot and his advice which is fundamental for me

Emil Forsberg capped off Leipzig’s triumph which led to the north Londoners crashing out 4-0 on aggregate as they also lost at the Red Bull Arena with Timo Werner’s penalty.

According to Calcio Mercato, both Arsenal and Tottenham are now keeping tabs on Sabitzer as he has been prolific in the Bundesliga.

The winger has made 35 appearances this season in which he has recorded 15 goals and eights assists in all competitions.

However, the Gunners and Spurs won’t find it easy to sign the Austria international if they decide to make a bid for him in the summer.

JUST IN: Chelsea ace Willian edging towards Arsenal or Tottenham transfer due to key preference 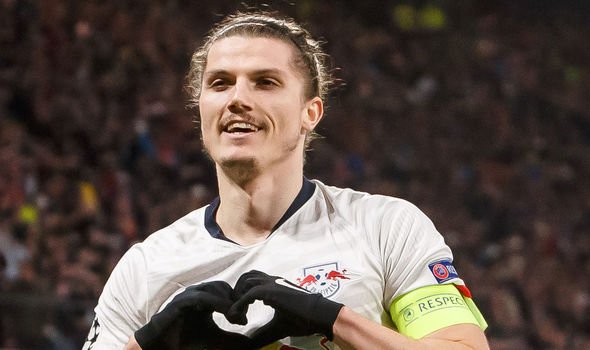 That is because AC Milan are also said to be interested and could sign his former manager Ralf Rangnick as well.

The 25-year-old holds Rangnick in high regard as it was the German coach who brought him to the Bundesliga from Rapid Vienna in 2014.

After a season-long loan at fellow Red Bull club Salzburg he became an integral part of Leipzig with a total of 42 goals in 179 appearances.

Sabitzer repeatedly praised Rangnick in the past as he truly benefited under his teachings.

He said: “I was delighted to follow him to Leipzig. He has a great esteem for me, I trust him a lot and his advice which is fundamental for me.”

Sabitzer is also said to be a leader inside and outside of the pitch, which is something both Arsenal and Tottenham may need after the summer.

Pierre-Emerick Aubameyang has been linked with an exit from the Emirates after a turbulent season even though he has previously claimed to be happy at the Gunners.

Aubameyang has been prolific for Arsenal this season as he has scored 20 goals in 32 matches in all competitions.

The same goes for Spurs captain Harry Kane who is reportedly looking for a different club that would help him win trophies at domestic and continental level.

Kane has been out with a torn hamstring ever since January and his return date is currently unknown.

Tottenham are set for a major rebuild under manager Jose Mourinho, who will hope to have the England international in his squad.