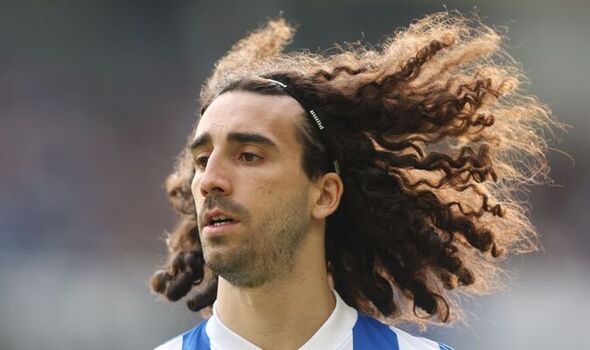 Tottenham and Chelsea have joined Manchester City in the race for £30million-rated Brighton left-back Marc Cucurella. The curly-haired Spaniard has been a revelation for the Seagulls this season following his £15m switch from Getafe after the Olympic Games in Tokyo last summer.

Cucurella’s exciting emergence has come as no surprise to Brighton’s scouts, who have recognised his potential since his Barcelona days.

Now his former club are living to regret selling the 23-year-old, who recently won Brighton’s Player of the Year award, to Getafe following his barnstorming debut campaign on English soil.

Manchester City are understood to be plotting a £30m swoop for the defender but it appears they are not the only interested club.

According to Spanish journalist Albert Roge, Spurs and Chelsea are also taking note of his development.

Chelsea have been after Cucurella since his Getafe days and nearly made an approach for his services last summer.

Thomas Tuchel is a huge fan of his mobility and energy on the left flank, something Chelsea have desperately missed since losing Ben Chilwell to an ACL injury last November.

But Spurs could also make their move as Antonio Conte looks to add more quality to his squad.

The Italian is hoping to be backed heavily in the transfer market this summer with Tottenham now on course to finish fourth, ahead of Arsenal.

Ryan Sessegnon has impressed at left-wing-back in recent weeks but Tottenham will be looking to recruit further competition for the young Englishman.

City, meanwhile, have been light on the ground at left-back ever since they lost Benjamin Mendy earlier in the season.

But left-back is an area that City intend to improve this summer and Cucurella, who recently scored and starred in the 4-0 victory over Manchester United, fits the bill.

Brighton are unlikely to accept bids in the region of £30m, despite the chance to make a significant profit.

The Seagulls have proved to be stubborn negotiators in recent transfer windows after holding out for £50m for Ben White.

Furthermore, Brighton rebuffed an offer of close to £30m from Aston Villa for Yves Bissouma in January.

Graham Potter and the Amex board are under no pressure to sell Cucurella and therefore, they see no reason to give in at the earliest opportunity – particularly with three clubs in the running.