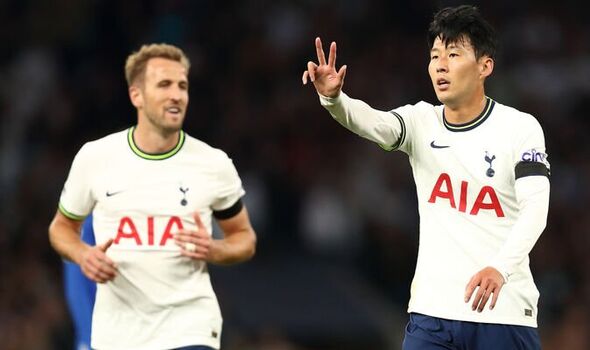 Hat-trick hero Son Heung-min emphatically ended his goalless run as Tottenham put six past Leicester on Saturday night to move level on points with Manchester City at the summit of the Premier League. Goals from Harry Kane, Eric Dier and Rodrigo Bentancur had Spurs 3-2 up before Son came off the bench after 59 minutes and scored three, including two Goal of the Month contenders. Express Sport looks at what we took away from the hosts’ 6-2 victory over the struggling Foxes.

Much talk pre-match was about Son’s anger at his own poor form. Spurs’ top scorer last season was without a goal in eight games this season before this and Antonio Conte decided to rest the jaded South Korean as a result.

He could not have responded better. Ignoring the run of Pierre-Emile Hojbjerg to his left on a counter-attack, Son curled a stunner into the top corner from 20 yards out just over 10 minutes after coming on.

The reigning Premier League Golden Boot holder netted a sumptuous second soon after and then after a VAR check went his way, had a 14-minute hat-trick to his name having prodded in a third. Spurs will hope, as they look to keep pace with champions Man City, that this is Son now back to his very best. They will be a frightening prospect if he is. 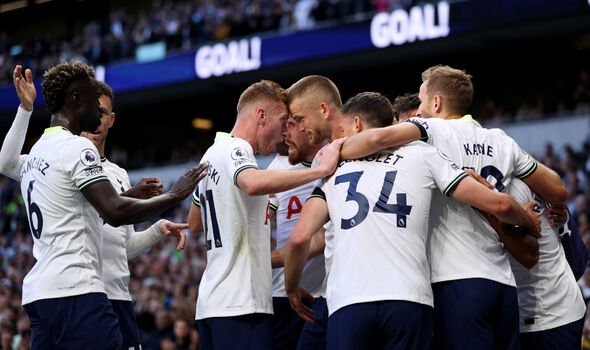 Despite going 1-0 up and pulling it back to 2-2, that is now one draw and six defeats for Leicester this season. They’ve conceded 22 goals in seven matches, including 11 in their past two. Overall, they have let in three more than Bournemouth, who lost 9-0 to Liverpool.

The defending at set-pieces was pitiful and so was the mistake that allowed Spurs to make it 3-2, when Wilfried Ndidi dawdled on the ball. After that, Son blew Leicester away. Brendan Rodgers is under growing pressure, and there will no doubt now be a flurry of bets on the Northern Irishman to be the next Premier League manager sacked.

Of 27 league games in 2022, the Foxes have won just seven to take 28 points from a possible 78 and have conceded 48 goals – only Southampton leaking as many this calendar year. If this form continues, the kind which greeted him with “you’re getting sacked in the morning chants” late in the second half, Rodgers will very soon be out of a job. 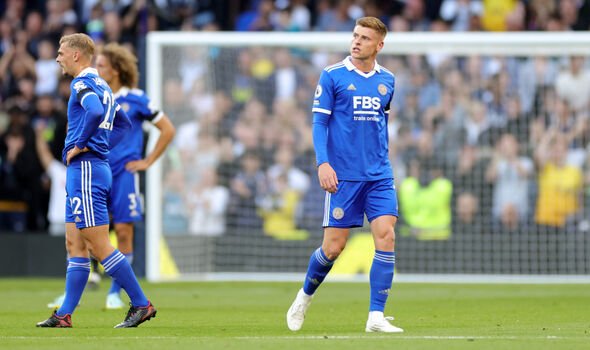 It was little surprise Spurs centre-half Davinson Sanchez went off on the hour mark after a poor display, with Ryan Sessegnon perhaps fortunate to last the full 90 minutes. The duo, and summer signing Clement Lenglet, struggled defensively throughout.

Sanchez was guilty of a rash tackle on James Justin that allowed Leicester to go 1-0 up from the penalty spot through Youri Tielemans, at least after a retake. And Sessegnon was too weak aerially in the lead-up to James Maddison’s goal, finding himself bullied by Timothy Castagne.

Sessegnon struggled in the air the entire match – both at right wing-back and left wing-back – and he seemed to lack a connection with Lenglet on the left. Sanchez meanwhile looked below the standard required and was rightly hooked. It could have been a very different day for the defensive trio if not for Lloris in goal behind them, and of course they owe Son a thank you too.

Leicester sit bottom of the table and are in real trouble; their set-piece problems are one of the biggest reasons why. The Foxes have now conceded 25 goals from corners and free-kicks since the start of last season.

That’s after Ivan Perisic’s first-half corner found the head of Harry Kane to make it 1-1. They were a tad fortunate Spurs had another set-piece goal ruled out for a Davinson Sanchez foul on Danny Ward.

Ward then had to tip a Sanchez header from a free-kick on to the crossbar. Leicester have this month hired a specialist set-piece coach in Lars Knudsen and he clearly has a hell of a lot of work to do. So do the defensive-minded coaches. 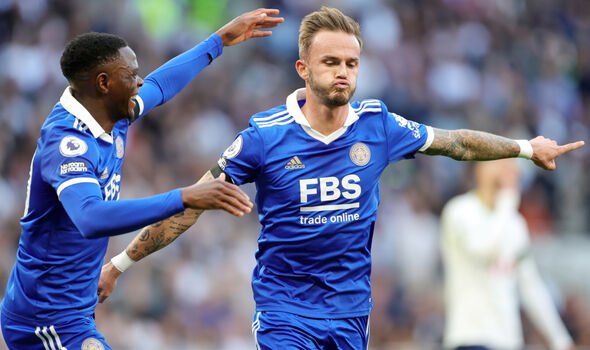 Maddison has 11 direct goal contributions in his past 10 Premier League games after his goal here. Only Kane, since the start of the 2021-22 campaign, has been directly involved in more league goals than Maddison (15 goals, nine assists).

Given Leicester’s struggles, his individual performances deserve credit. He produced a supreme finish to make it 2-2, delicately lifting the ball over the stretching Hugo Lloris. He was also twice denied by Lloris, who also prevented him getting an assist after saving a Patson Data header.

This performance was just days after the No 10 was snubbed from the latest England squad. He couldn’t be doing a great deal more to get Gareth Southgate thinking about him ahead of the World Cup.