Match report as Harry Kane scores twice in the first half to help Tottenham beat Pacos de Ferreira 3-0 on the night and 3-1 on aggregate; Vitorino Antunes’ own goal seals the win for the hosts; the draw for the group stage of the Europa Conference League takes place at 11am on Friday

Harry Kane scored twice on his first start of the season as Spurs advanced to the Europa Conference League group stage with a 3-1 aggregate win over Pacos de Ferreira.

Kane started and captained Spurs after a long-running transfer saga that put his future at the club in doubt this summer, but that will all be forgotten now after his first-half double ensured European football for Spurs this season.

The England captain’s opened the scoring after just nine minutes with a well-taken strike, before doubling the home team’s lead with another composed finish 11 before half-time – the striker’s 39th and 40th European goals for the club, more than any other Spurs player.

Vitorino Antunes’ 70th-minute own goal wrapped up the victory as Nuno Espirito Santo’s side overturned their 1-0 first-leg deficit to take their place in Friday morning’s draw for the group stage of the Europa Conference League.

How Kane returned in style

This night was always going to be about Kane and he could have opened the scoring after just 18 seconds.

Cristian Romero’s long ball over the top was controlled dead by the striker, but he scooped his effort over the top. 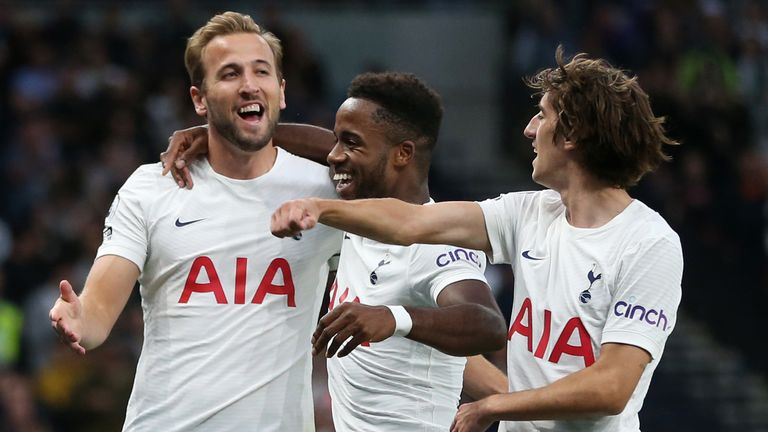 He did not need much longer to mark his return with a goal as he powered Spurs ahead on the night in the ninth minute.

Harry Winks retrieved the ball well, played in Bryan Gil and the Spanish winger’s cross was expertly controlled and fired home by Kane.

It was a special reaction by the fans in the stadium, and any worries Kane had about how he would be received following this summer’s transfer saga would have been eased.

Harry Kane started his first game of the season in Tottenham’s Europa Conference League play-off second leg against Pacos de Ferreira. The England captain announced on Wednesday he would be staying at Spurs this summer having been keen on a move to Manchester City and was captain as Nuno Espirito Santo’s side tried to overturn a 1-0 first-leg deficit.

New signings Cristian Romero and Bryan Gil were given first home starts and Spurs had firepower on the bench, with Heung-Min Son, Dele Alli and Steven Bergwijn among the substitutes.

His second came 10 minutes before the break as his blocked shot fell to Giovani Lo Celso, who tried to fire home a rebound, but the ball found its way back to Kane and he made no mistake.

If Kane was the star of the show, then Gil, making his home debut following his summer move from Sevilla, was the understudy as he showed why people are so excited by him.

He hit the post with an effort in the first half and then saw another goalbound strike blocked after the restart. 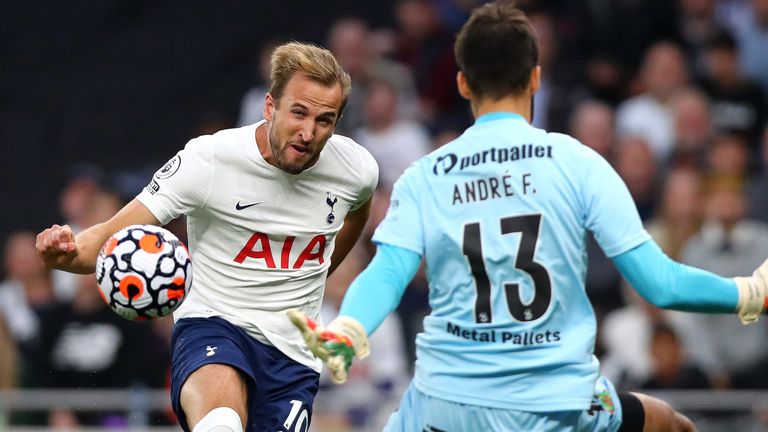 It was a barrage of attacks from Spurs and their third goal came in the 70th minute.

Lo Celso fizzed a free-kick in from a wide right position, which took a nick of Pacos defender Antunes and flew into the corner, with the Argentinian being credited with a goal.

Kane left the pitch shortly after to a hero’s reception and could have been in no doubt that he is still loved at the club he actively tried to leave this summer.

Spurs take on Watford at the Totenham Hotspur Stadium on Sunday, with the Premier League game kicking off at 2pm.