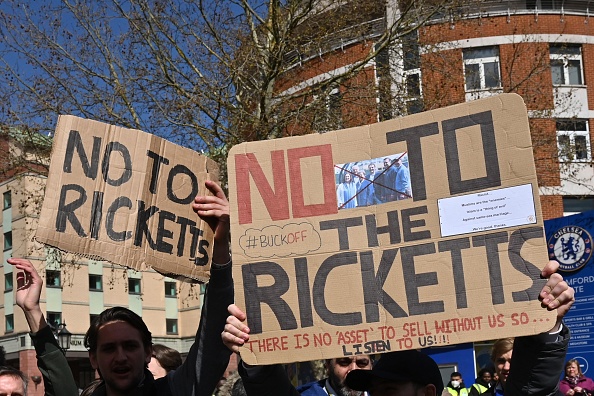 Perspective Chelsea owner Tom Ricketts has again promised to put ‘diversity and inclusion at the heart of the club’ should the takeover bid fronted by his family be successful.

Hundreds of supporters staged a protest ahead of Saturday’s Premier League game against Brentford at Stamford Bridge as the #NoToRicketts campaign gathered significant momentum.

Tom and Laura Ricketts have worked hard to build links with Chicago’s Muslim community after Joe’s comments from 2019.

Brother Pete Ricketts has been linked to anti-LGBTQ sentiment, but is not involved in either the Chelsea bid.

Laura Ricketts in contrast is the first openly gay owner of a major American sports franchise in her co-chair role at the Chicago Cubs.

And, in response to the scenes which overshadowed the build-up to the resumption of Chelsea’s season, a statement was released which read: ‘Over the past fortnight, our bid team has met with several supporter groups to explain our vision for Chelsea Football Club.

‘In those meetings, and by letter to all groups, we have shared a set of specific commitments we will make to fans, if our bid is successful.

‘We believe these are far-reaching and certainly include an absolute commitment on the part of the Ricketts Family and the bid team to put diversity and inclusion at the heart of the club.

‘We look forward to more meetings – including with the Chelsea Supporters’ Trust – over the coming day and to making a public reiteration of our values and commitments.’

The rival bidders for Chelsea, which includes the likes of LA Dodgers part-owner Todd Boehly and British business titan Jonathan Goldstein, Sir Martin Broughton and Lord Sebastian Coe, and Boston Celtics co-owner Stephen Pagliuca, will have the chance to meet with Stamford Bridge club executives next week, and potentially even manager Thomas Tuchel.

‘I don’t know if it’s a good idea or a bad idea. Maybe it’s best to be involved, if I am involved, as late as possible.

‘I’m not sure if I could tell you the names of the consortiums and new bidders.

‘It is my information that it is down to four and in the next weeks there should be further talks and negotiations.’