Home » Soccer » ‘There’s an element of hypocrisy in everything we do’: Why the Socceroos had to speak up

Can sport and politics mix? Should they? Jackson Irvine, the driving force behind the Socceroos’ midfield and their world-first public stance against Qatar’s human rights record, comes at these questions from an interesting and informed perspective.

Irvine plays his club football at FC St Pauli, a renegade German club based in the same district of Hamburg where The Beatles picked up their famous mop-topped haircut while playing shows along the Reeperbahn, aka the “sinful mile” – one of Europe’s most notorious red-light districts, filled with squatters, musicians and various other types of misfits.

When a bunch of local punks, socialists and anarchists started turning up at the Millerntor-Stadion in the 1980s and waving around the Jolly Roger flag, it set the club on a unique path. After fully embracing the values of its stridently left-wing supporter base and adopting the skull and crossbones as an official symbol, St Pauli became a proudly anti-racist, anti-fascist and anti-homophobic organisation, campaigning for social causes long before it was trendy in sport.

They are now, despite playing in Germany’s second division, one of football’s most marketable clubs, once described by CNN as the “coolest” in the world.

So last year, when St Pauli signed Irvine – the long-haired, guitar-strumming, vinyl-collecting midfielder from Melbourne with an array of tattoos that pay tribute to Lou Reed, Buffy the Vampire Slayer, Seinfeld, and Moe Szyslak from The Simpsons – it just made a whole load of sense.

“The way that the club operates, there’s no particular structure behind that,” Irvine told the Herald and The Age. “Of course, the people at the very top are as passionate about these issues as the fans and the community are, which is the most important thing, and when they arise, or there’s something within football or within society that they disagree with, they’re very quick to be outspoken and make their position clear.

“That sets the tone for the way everybody else feels and reacts. Once you create that kind of culture, the values become embedded in the community and the football club. And then it’s not even something that needs to be discussed – people understand exactly what is and isn’t acceptable. That’s the best you can hope for in sport, I guess.”

St Pauli lives and breathes its ethos. When the club couldn’t find an apparel sponsor with ethical, sustainable methods that satisfied them, they took it in-house and started making their jerseys themselves. Promoted to captain this season, the armband Irvine wears is patterned with the rainbow flag, which also flies proudly at the stadium. They sell it out every week.

So when people ask Irvine about whether sport and politics can mix successfully, he knows they can. 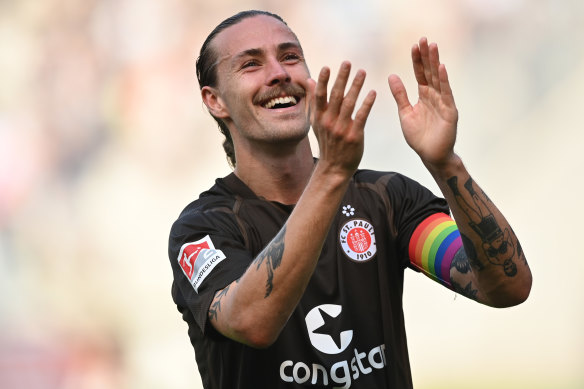 Socceroo Jackson Irvine, who plays his club football for St Pauli in Germany’s second division, was the driving force behind the team’s statement on Qatar.Credit:Getty

It is little surprise, then, that Irvine’s social conscience has solidified within such an environment. The 29-year-old was central to not only the three-minute video released by the Socceroos on Thursday morning, but the construction of it.

Together with skipper Maty Ryan and defender Bailey Wright, Irvine has been at the forefront of the group’s education process in various talks with FIFA, World Cup organisers, LBGTI+ and human rights groups – facilitated by Professional Footballers Australia and, later, Football Australia, which has helped them understand the situation in Qatar at the deepest possible level.

According to FIFPro, the global players’ union, few national teams have been as engaged with the topic as the Aussies.

“The more involved everybody’s become, the more intense that journey has been,” Irvine said. “Being involved in these conversations, and in particular, directly with the migrant workers, changed a lot of things for a lot of the group and I think that’s why everybody was keen to be involved in the releasing of a public statement and making a position clear.”

The Qatar World Cup’s Supreme Committee for Delivery and Legacy has since responded to the Socceroos’ statement, praising them on one hand for raising awareness of “important matters” while also delivering a backhander, saying “robust implementation of labour laws is a global challenge, including in Australia. No country is perfect, and every country – hosts of major events or not – has its challenges.”

Much of the criticism directed at the players since has been of a similar note. They’ve been accused of grandstanding, and told they should boycott the World Cup – even though human rights organisations have warned doing so would not be as helpful in implementing change as applying public pressure. They’ve been labelled hypocrites for not speaking up on other social causes, particularly within Australia. 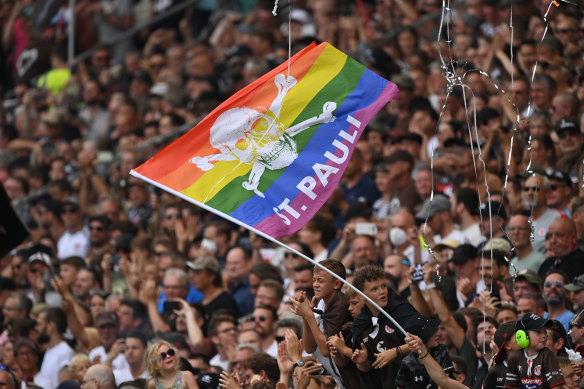 St Pauli has become one of the most marketable teams in world football, despite its comparatively lowly status, because it has embraced the left-wing ethos of its supporters.Credit:Getty

Irvine is more than happy to go there.

“When you speak out on one issue, does that automatically put you in a position where you have to have an opinion on all social and political issues, as well as issues of basic human rights?” Irvine said. “As Australians, we have an absolutely terrible record of our treatment of asylum seekers and refugees, and our treatment of the Indigenous population is historically unacceptable.

“I will never speak on behalf of a team or an organisation, but I hope it’s something that all athletes become more engaged in, and we can be a part of more conversations moving forward. A lot of these issues are closer to home than we would probably realise.”

Speaking of home, Irvine is across the recent debates within Australian sport, revolving mainly around netball and cricket, about how players are now unafraid to speak up against sponsors and other decisions that run contrary to their values.

He believes the likes of Donnell Wallam and Pat Cummins have shown “real bravery”, and that their actions should be celebrated. He also recognises there is a fine line between standing up for a cause and putting the financial viability of your team or sport at risk.

“For too long, athletes, we’re kind of put in this corner and told to just shut up and get on with it,” he said. “It’s a difficult one when you’re paid to do a job, and you wear the uniform – but the players are the ones out there, promoting brand names, having logos on your arm, your chest, whatever. It’s only right the players’ voices are heard when it comes to making sure that the brands you represent align with the values of the team.

‘Being involved in these conversations, in particular, directly with the migrant workers, changed a lot of things for a lot of the group’

“As you’ve seen with the Diamonds standing in solidarity together, you’ll tend to find that teams will always stick together on these issues.”

Irvine is happy to admit his life is filled with contradictions, and that he is no paragon of virtue. He is passionate about climate change and the environment, and while he doesn’t own a car – and walks through the streets of Hamburg, alongside fans, to the Millerntor on game day – he has to hop on several around-the-world flights per year to play for the Socceroos.

Faced with a choice between doing nothing, or trying imperfectly … for him, it’s no choice at all.

“There’s an element of hypocrisy in everything that we do,” Irvine admits. “But I suppose an awareness, and being able to take responsibility for the sort of things that you do contribute to as well, it can only be a good thing.”

That, for Irvine, is the key: players and teams at the World Cup, he points out, are intrinsically linked to the deaths, injuries and mistreatment of migrant workers who have built the stadiums, hotels and infrastructure that will accommodate them next month.

“We’re going to leave a direct footprint there. As soon as we step foot on the ground, our very presence in the country has an impact,” he said. 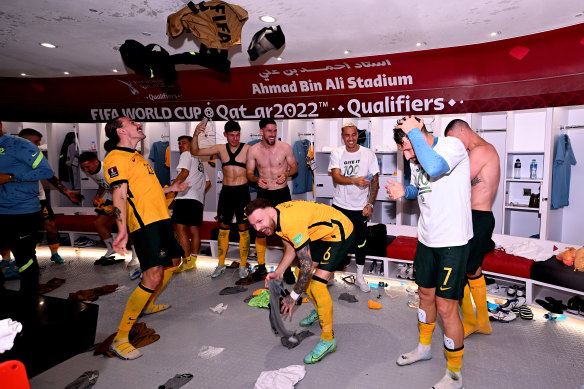 “It’s just about finding the balance of issues that you’re directly a part in. I think, in a lot of these other spaces, moving forward, we’ll be doing the same again, and there’ll be another conversation to be had about how to engage with those. You’ve just got to try and do the best you can.”

While the rest of the football world will probably move on from the Qatar debate once the World Cup is finished, the Socceroos can’t: they are in the same confederation, and indeed will be back in Doha next year for the Asian Cup. There is also the very real prospect of political retribution for Football Australia and its likely bid to host the 2034 World Cup, with Qatar also seen as a rising power off the field in Asia.

Whatever the consequences, Irvine intends to maintain the rage.

“It’s about momentum, and continuing the conversation and applying that pressure to governing bodies and authorities that have the power to implement this kind of change,” he said.

“It’s not something we’ll be slowing up on. I hope the football community continues to do so as well, long after the tournament’s finished.”