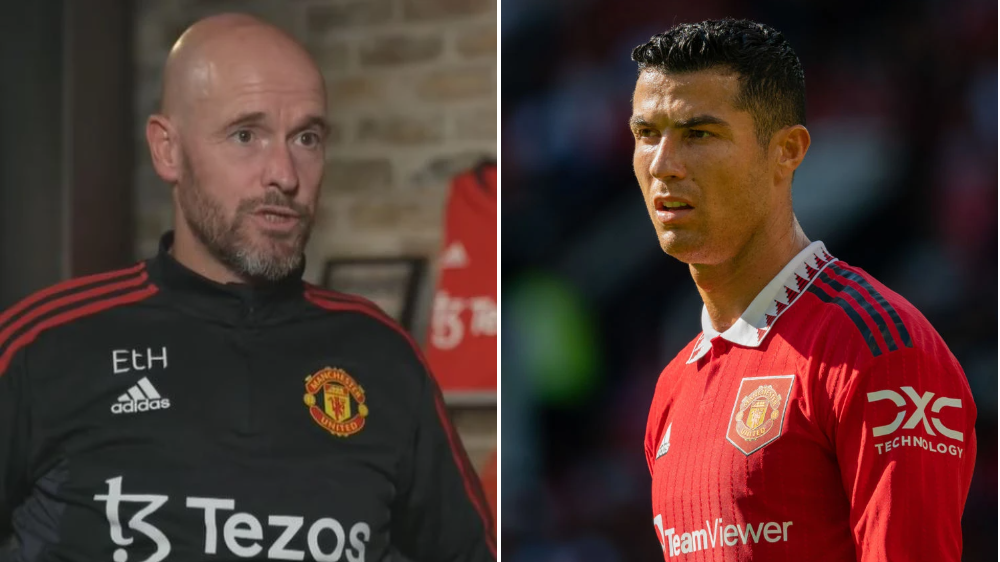 Ronaldo has missed the majority of United’s pre-season preparations due to family reasons and was absent for the club’s tour of Thailand and Australia in order to remain in Portugal.

The 37-year-old returned to Manchester last week and began training with the squad, although he did not join them for their friendly against Atletico Madrid in Oslo on Saturday.

Instead, Ronaldo was given a 45-minute cameo against Rayo Vallecano at Old Trafford and was replaced at half time.

But instead of staying for the remainder of the game, Ronaldo was spotted leaving Old Trafford before the final whistle as he signed autographs for a handful of supporters outside the ground.

When asked about Ronaldo’s decision to go home before the team’s post-match debrief, Ten Hag told Viaplay: ‘There were many more who went home.

‘I certainly don’t condone this. This is not acceptable. For everyone.

‘I tell them that it’s unacceptable. That we are a team, a squad. And that you should stay until the end.’

Ronaldo has been looking to leave United this summer as he is keen to continue playing in the Champions League.

But despite his agent, Jorge Mendes, holding talks with Chelsea, Bayern Munich, Paris Saint-Germain, Barcelona and Real Madrid, Atletico Madrid and Sporting CP there have been no takers so far.

United have been adamant throughout the summer that they are unwilling to sell Ronaldo, who has just one year remaining on his contract.

Ten Hag has already suggested that Ronaldo will not be fully fit to start United’s Premier League campaign, which begins at home to Brighton on Sunday.

‘He is not on the level of the rest of the squad because he missed a lot of weeks, but he needs games and he needs training, a lot,’ Ten Hag said on Sunday.