EXCLUSIVE: ‘I HATE that Liverpool beat us’: Man City’s Manuel Akanji on their painful Anfield loss, how Erling Haaland is improving and his Dortmund ritual of pre-match hot chocolate with Jadon Sancho

A couple of weeks into the Premier League season and at a time when Erling Haaland’s goal tally stood at an altogether more modest nine, Manchester City snuck another signing from Borussia Dortmund into the building.

There was less fanfare about this one. Haaland had arrived from Germany for big money specifically tasked with elevating City to yet another new level.

His old team-mate Manuel Akanji was cheaper — at just £15million — and certainly less well known, his arrival driven in part by a late summer injury crisis at centre half.

But the Swiss defender has already, in his own under-stated and elegant way, made a significant impact. 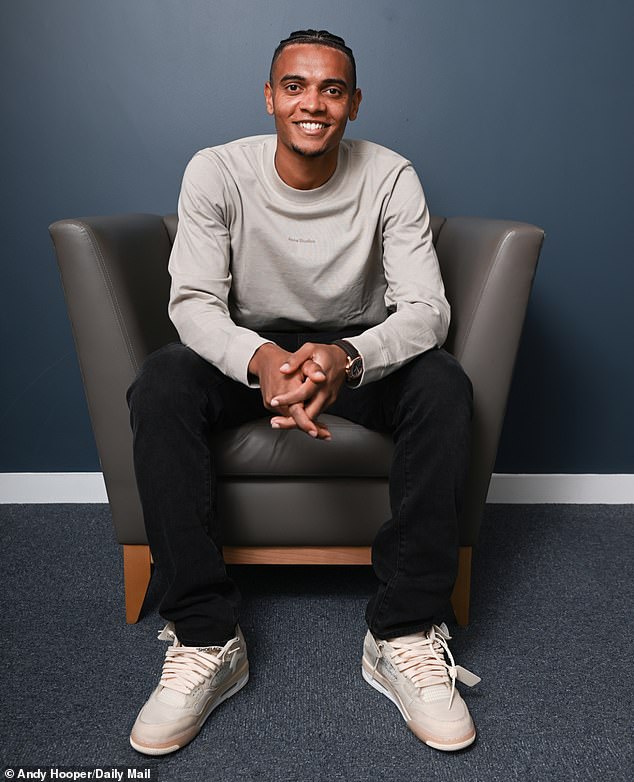 We first noticed him in the Manchester derby a month after his arrival. With Aymeric Laporte and Ruben Dias sitting on Pep Guardiola’s substitutes’ bench, Akanji started the game. It felt like a big call but soon didn’t look like one.

The 27-year-old was superbly unruffled as City destroyed their neighbours 6-3. A month on and he is still in the team.

‘Everything happened late in the transfer window to be honest,’ Akanji tells Sportsmail. ‘It was through my agent but Erling also texted me saying he had heard something and saying that City had asked him about me.

‘I wasn’t sure if it was serious or not. I said I was keen to come but I am always insecure in those situations as I don’t want to get my hopes up. But all of a sudden I was here and really happy. I have been playing in the team but that hasn’t surprised me. 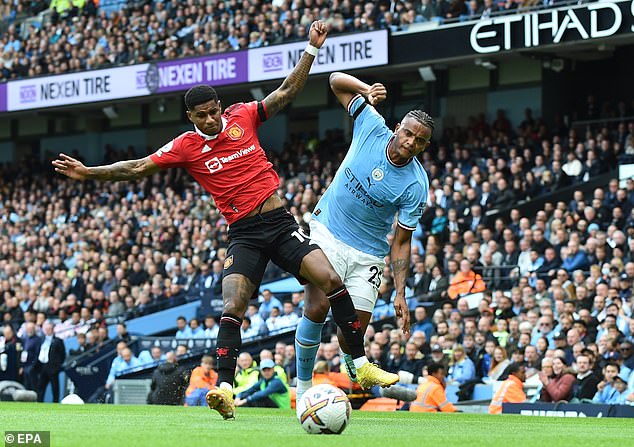 ‘I know I am capable of it but just didn’t know if it was going to happen like this. I was ready when I got here and I just tried to show that to the coach. I am happy that he has seen something he likes.’

Akanji’s change of circumstances since late August is indicative of how football can go.

At Dortmund, he was entering the final year of his contract and not actually in the team. Now he is anticipating a World Cup with Switzerland as a member of arguably the best club team on the planet.

‘Yeah, football can quickly change in a good way for you and this shows that,’ he nods. ‘But it can go the other way also. So you always have to be on your toes to bring everything you have.’

Four days after the chaos of Anfield, Akanji is sitting at home. With City’s squad given two days off — ‘to clear our minds’ — after the 1-0 defeat by Liverpool, their newest recruit flew home to Switzerland to celebrate his mother’s birthday.

Now, with the dust having settled, Akanji is able to reflect on his first experience of what would appear to have become English football’s most multi-layered modern rivalry.

‘It’s funny that you ask,’ says Akanji with a smile. ‘Because before the game, when we walked into the stadium for our warm-up, it was so quiet. No booing or anything. I told Erling I thought it was weird. I expected it would be really crowded and the mood against us. But I felt nothing at all. 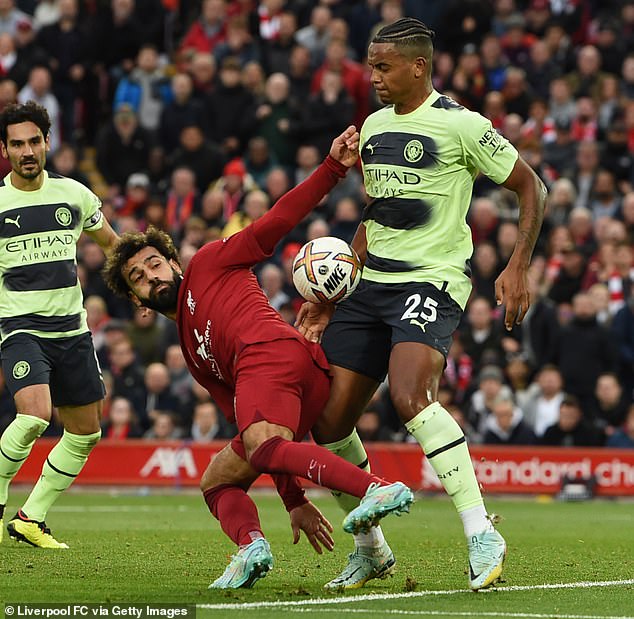 ‘We came back in before the game and I talked to Riyad Mahrez as well. He was sitting right next to me. I was like, “Is it always like this here? Everybody talks so highly of Anfield and I don’t really see it”.

‘He just told me to wait until the game started and then when it did I was like a different atmosphere completely. Particularly in the second half when our goal was disallowed and they scored. It was really, really loud then.

‘Not as loud as Dortmund. How many are there at Anfield? 50,000? There are 81,000 at Dortmund so maybe it’s not fair to compare. But it is a great feeling at Anfield. The people are really close to the pitch and it was a great atmosphere for them and I like to play in that. 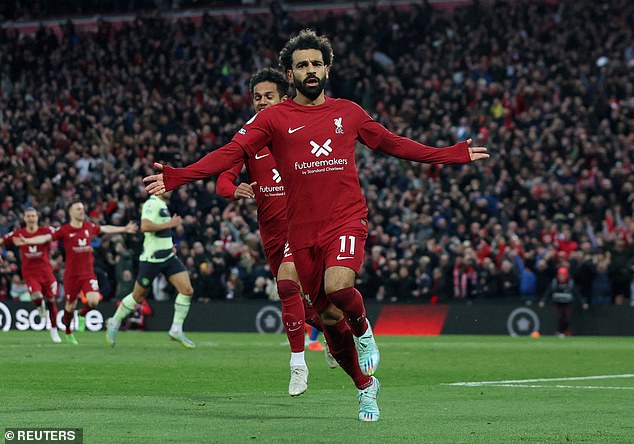 ‘I just hate the fact we lost because we shouldn’t have lost it and also because of the way the goals went.’

For those who have been on the moon, Liverpool beat City on a bad-tempered day with a late Mo Salah goal. City’s Phil Foden had earlier had one disallowed.

‘The goal we scored felt like a great moment,’ says Akanji. ‘But it was disallowed. I am also not sure if Salah touched the ball with his hand on their goal when I saw it again on replay.

‘The ball came so fast and then it stopped. He turned a little bit and the ball went over there. But it’s over now and we can’t change it so we just have to try to hope next time we are going to win this game.’ 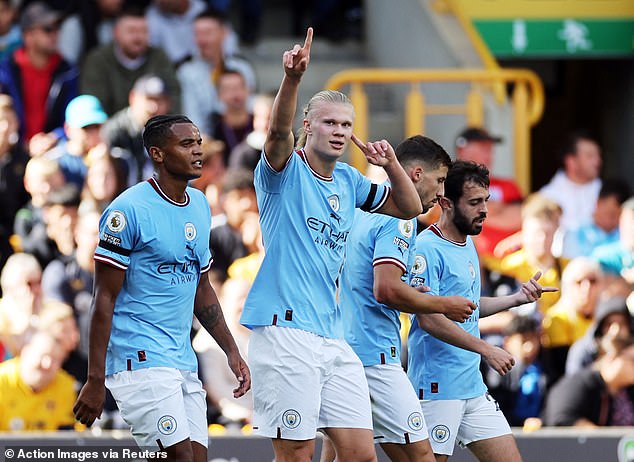 If last Sunday’s game reminded us of the levels Jurgen Klopp’s Liverpool can still reach, it also said much for the football City have played over the last four or five seasons to win so many titles. Liverpool, as it stands, have just one from that time.

‘I am really enjoying it when I compare it to teams I have played with before,’ says Akanji, who started his career with serial winners Basel in his own country.

‘I look around at the players I am training with and they are capable of doing so many things. It’s incredible really.’

Standing out from the crowd in more ways than one this season has been Haaland. So far, the young Norwegian has 20 goals and his old Dortmund team-mate believes he has kicked on already under Guardiola.

‘As a footballer he has already improved on what we was at Dortmund,’ reveals Akanji. ‘He is getting these great assists from his team-mates isn’t he? But he tries to improve a lot in training. He does a lot of work by himself.

‘He enjoys being around the team and spends a lot of time there getting his body ready for the game. That’s how he is. I get along really well with him and he has already helped me feel settled here.’ 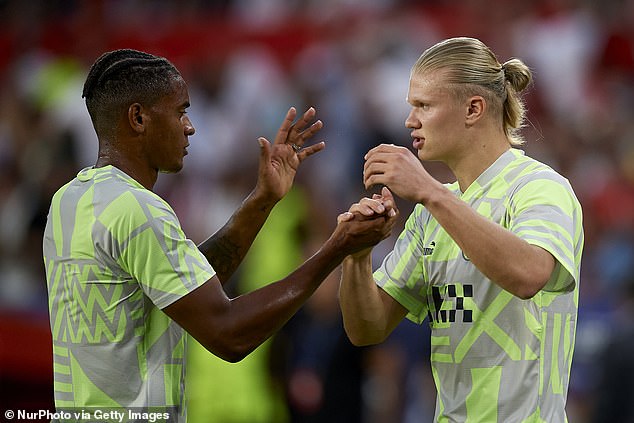 Intelligence runs in the Akanji family. His father Abimbola worked in finance and one of his two sisters, Sarah, was until recently a politician.

‘They are all much smarter than me,’ Akanji laughs. But the City defender does have a remarkable natural talent for mental arithmetic. Demonstrated during a superb Sky interview recently, Akanji can deliver the answers to the most complex sums in less than a second. In Germany they said he was ‘faster than a calculator’ and they may have been right.

Asked, for example, by Sky to provide the answer to ‘93 x 60’ he replies with ‘5,580’ without blinking. It must be a heck of a party trick but just one thing: now that the secret is out, does he not fear an avalanche of random mathematical challenges being set whenever he’s approached for an autograph? Is long division about to become the new selfie?

‘I have already had that in Germany a couple of times,’ he laughs. ‘Sometimes when I went to do a signature someone would ask, “What’s 25 x 32” and I would be like, “Come on, I just had a tough training session. I just want to do the signature”. 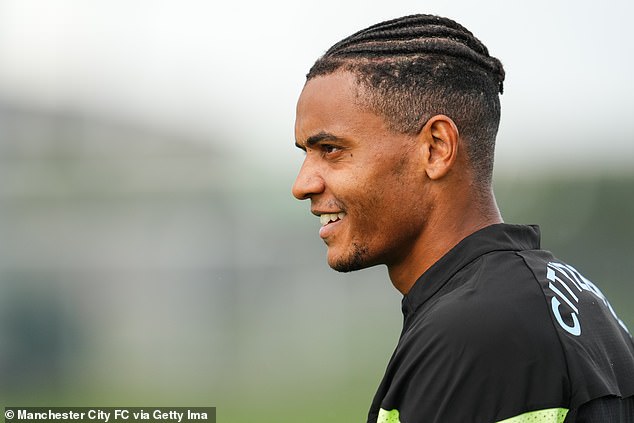 Akanji has varied gifts off the pitch, including an extraordinary talent for mental arithmetic

‘So I won’t always do it. I am not always in the mood to do calculations! And, actually, sometimes I do get the answers wrong on purpose because people don’t bother to check. They are just stunned because I can just do it so fast.’

All of this is delivered with a smile and Akanji comes across as a man entirely comfortable in his skin. Maybe it sometimes helps to come to a big club a little later in a career. He confesses to no anxiety about the scale of his move to City.

His wife gave birth to their second son, Keeyan, almost as soon as they arrived in England and that too has been taken in his significant stride.

‘When I met the coach, the first thing he did was ask about how my wife was,’ he reveals. 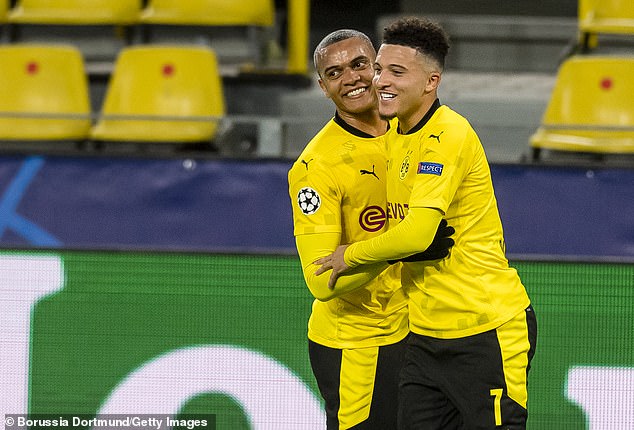 As for his pre-match routine, it is rather endearingly Swiss. ‘Hot chocolate,’ he says. ‘I don’t know why. I started it about three years ago at Dortmund when Jadon Sancho was around.

‘We always used to drink a hot chocolate before away games, before bedtime. It is just something that has stayed with me. I think it’s because I used to do it as a kid and I still like it. Jadon was always in the room next to me.’

With Sancho now at United, the two friends are in touch. ‘We spoke today on the phone actually,’ he says. United are not at City’s level these days, though. Few clubs are.

‘I thought I could fit here and I am happy I have,’ adds Akanji. ‘I don’t worry too much and I play better if I don’t think or stress too much about the game. I know what I can do, I know what I am capable of.

‘I am just really enjoying this. Everything seems to suit me. The team, the coach, the system. I just want to win titles.’