‘Now to the fifteenth!’ Jubilant Spanish press is ALREADY thinking about next season… just two days after Real Madrid won their 14th European Cup with victory against Liverpool in Paris

The Spanish press is fast forgetting Saturday’s Champions League triumph for Real Madrid, with eyes turning to next season’s efforts.

AS led with ‘now to the fifteenth’ after Los Blancos secured a 14th Champions League win (no other club has more than seven), while Marca’s front page read ‘the beautiful girl’, a Spanish nickname for the number 15.

Its an understandable complacency given the club has won European football’s biggest prize five times in the last nine years. 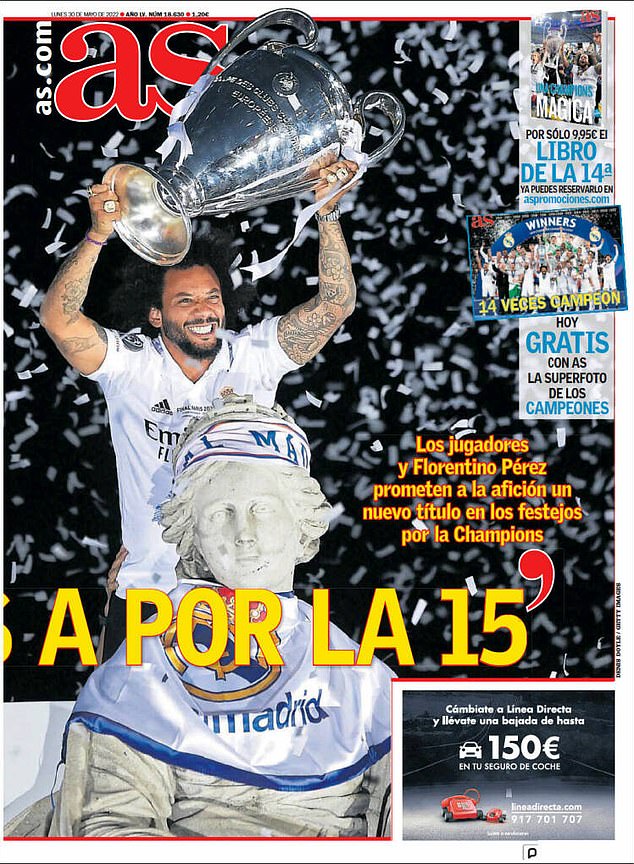 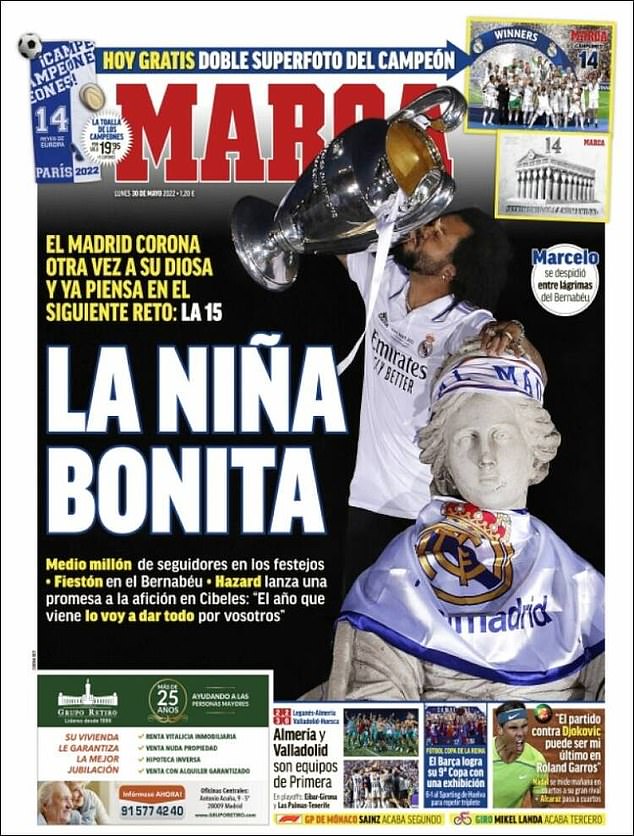 Los Blancos saw off Liverpool at the Stade de France thanks to a Vinicuis Junior goal in the 59th minute. An excellent display from Thibaut Courtois in goal ensured that was enough for Real to take the trophy.

It was an impressive outing against a side that had only lost twice all season, and it topped off a remarkable European campaign for the Spanish side that saw them come from behind in the round of sixteen, quarter final and semi final.

Their journey to the final was led by Karim Benzema, who scored 15 goals in 12 games in the competition, including hattricks against PSG and Chelsea.

Real also took home La Liga and the Supercopa de Espagne, as manager Carlo Ancelotti became the first manager in history to win all six possible trophies with the club (he previously won the Copa del Rey, Club World Cup UEFA Super Cup in 2014) and the first manager to win each of Europe’s top five leagues.

To honour their side’s dominating season, thousands gathered in Madrid on Sunday Celebrations to catch a glimpse of players celebrating outside City Hall. Ancelotti later led a delegation at the city’s famous Catedral de la Almudena where the squad was pictured with their trophies.

The players wore black suits for the occasion, including departing winger Gareth Bale who picked up his fifth Champions League with the club despite a historically turbulent relationship with the fans, media and management in Madrid.