Australia could hardly have made a better start to their final phase of World Cup qualifying, swatting China aside 3-0 despite a compromised preparation schedule in the lead up to the opening phase three game in Doha.

But a very different challenge now awaits on Tuesday night in Hanoi’s My Dinh National Stadium when the Socceroos face a Vietnam side, which will be desperate to bounce back after an opening game loss to Saudi Arabia last week. 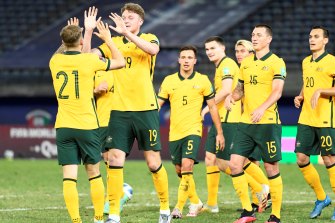 Harry Souttar, second from left, has backed the depth of the Socceroos squad preparing to face Vietnam.Credit:Getty Images

Whereas in Qatar, the match took place in an air-conditioned stadium with a temperature maintained around 21 degrees Celsius, the next fixture will be staged in hot, steamy, clammy conditions with high humidity and a strong chance of rain on a day when the forecast top is 32.

However, such is the equanimity in the group that national team coach Graham Arnold figures that match variations – either in opponent, game style or the conditions – will not unduly worry the squad. 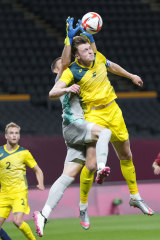 Harry Souttar, the giant centre-back, sounds like he should have been turning out for Scotland in their World Cup qualifier against Denmark last week rather than for the Socceroos, but accents are deceptive. The big Aberdeen-born Stoke City defender, who did indeed play for Scotland at under-19 and under-17 level, has committed wholeheartedly to playing for Australia, the land of his mother, Heather’s birth.

And he is relishing the fresh challenge Vietnam poses.

“It was a positive start considering that we only had two training sessions together in Qatar,” he said after the China win. He also says different climatic conditions in Hanoi hold few fears.

“We have played in very hot conditions in Kuwait [in World Cup qualifiers earlier this year], so we won’t make conditions an excuse. We will do our due diligence on Vietnam and see their strengths and weaknesses, but it’s mostly about us and what threat we carry to them.”

Souttar, who at 1.98 metres tall has an obvious height and weight advantage over what are usually more slightly built Asian opponents, has become something of a goalscoring talisman at the back since breaking into Arnold’s team, netting six times in seven games.

He wasn’t on target against China, but says opportunities will come in Vietnam as Australia looks to take the game to their opponents – as the Socceroos did after a shaky opening against the Chinese.

“The first five or 10 minutes we didn’t start the way we wanted to, but the two goals were crucial in such a short space of time and from then on, I think we controlled the game. In all honesty it probably should have been a bit more,” Souttar said.

“You can look to different excuses for that, but I just think we didn’t start well, whether that is individually or collectively as a team. But after that five or 10-minute spell where they had a couple of corners and Maty [goalkeeper Mat Ryan] had a few saves to make, I think the game was relatively comfortable for us.

“I think when you have got the midfielders we have got, Ajdin [Hrustic], Aaron Mooy, Tommy [Rogic], Jacko [Jackson Irvine], these guys have got such good quality on the ball it makes my job easier [at the back]. Just give them the ball and don’t complicate it as such.

“We got the movement patterns a bit better, finding a bit more space in the way they were pressing, our full-backs were on all the time, and after the five -10-minute mark we got them more on the ball.”