Home » Soccer » Slavia Prague 0-0 Leicester: Brendan Rodgers’ side with work to do in second leg

Match report as Leicester were held to a 0-0 draw in Prague; Brendan Rodgers’ side not at their fluent best as Slavia Prague kept a clean sheet; result leaves Leicester with plenty of work still to do in next week’s second leg at the King Power Stadium 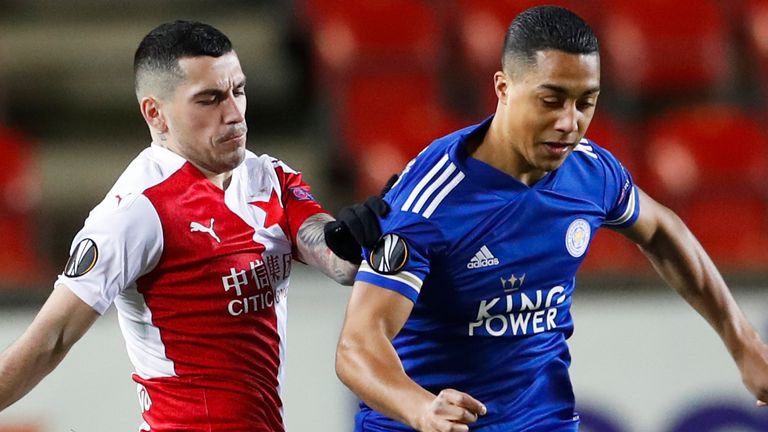 Leicester were held to a 0-0 draw by Slavia Prague in the first leg of their Europa League last-32 clash at the Sinobo Stadium in Prague.

The Premier League side created the better chances in the first half with Harvey Barnes, who was denied by goalkeeper Ondrej Kolar, the closest to opening the scoring. Barnes also had penalty claims waved away after going down under a challenge from Tomas Holes.

After the break, Slavia Prague upped the tempo, but clear-cut chances were few and far between for the hosts. The game started to open up in the closing stages and Barnes was inches away from picking out an unmarked Kelechi Iheanacho, who was brought on for Jamie Vardy, as the visitors went in search of a winner.

However, Leicester were left frustrated as the hosts held on to leave Brendan Rodgers’ side with plenty of work still to do in the second leg, which takes place at the King Power Stadium next Thursday.

Leicester are back on Sky Sports on Sunday as they travel to Aston Villa; kick-off 2pm. Meanwhile, Slavia Prague travel to Teplice in the Czech First League, also on Sunday.

The pair will then meet again at the King Power Stadium for the return leg next Thursday.