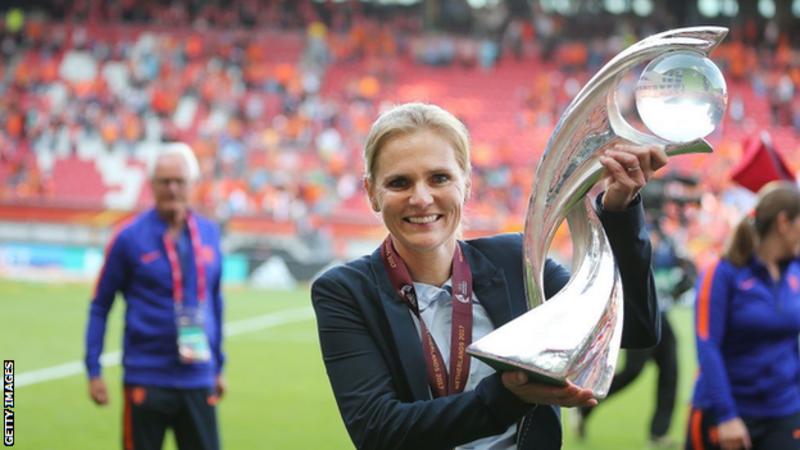 Incoming England boss Sarina Wiegman says she will be managing a “world-class team” in a “world-class situation” when she takes over the role in September 2021.

Asked if the England job was the best in the world, she said: “I definitely think so. I love my job.”

Speaking at her first news conference since her appointment, Wiegman, 50, added: “Ten years ago there was no opportunity for me to be a professional coach and look where I am right now. With the Netherlands we have had a great journey so far.

“I am very happy and honoured that I can be a part of that and I can bring my experience and knowledge to the team. It is a world-class appointment.”

Wiegman has signed a four-year deal with England and will take charge after the postponed Tokyo Olympics next summer.

A total of 142 people applied for the role but Baroness Campbell, the Football Association’s director of women’s football, said Wiegman was the “number one choice”.

“England is the cradle of football,” said Wiegman.

“They have done really well, there is great potential and they have developed the game very much. There is a big organisation behind it and they have a professional league.

“There are so many players that are talented. The facilities are great and it is a real challenge to make the move.”

Wiegman’s first major tournament in charge of the Lionesses will be the Women’s Euro 2021 – which has been postponed until July 2022 because of the coronavirus pandemic – on home soil.

But since last year’s quarter-final win over Norway in France, they have lost seven of 11 games and failed to retain their SheBelieves Cup title in March.

“England has a very good team and potential. It’s such a good team that they can win major tournaments but you always have to deal with things you can’t control,” said Wiegman.

“Everything that is in our control, we will influence in a good way, or we will at least influence in the way we want to. But you also have to deal with other countries who are developing very much too. That is the nice thing about sport.

“You cannot say ahead we are going to win this or win this. You have a dream and an ambition of what you are going for and you do everything that is in your power to reach the highest performance.”

It is not yet known who will lead Team GB at the Tokyo Olympics next summer but Neville remains under contract as England boss until July 2021.

But Wiegman said she would not “interfere” with his coaching as her responsibility lies with the Netherlands for another 12 months.

“Phil has responsibility for his team in the upcoming 12 months. I will absolutely respect that. I will get some information but I will really be in the background,” she said.

“The last thing I would want to do is to interfere in his work but of course I will have a close look because I will jump in in 2021. I have the responsibility of the Dutch national team and that is my main focus.

“Maybe in the future there will be a transition when we switch jobs so of course I will talk a little closer to Phil.”