Bayern Munich midfielder Sarah Zadrazil believes the 2021 Women’s Champions League is wide open ahead of this weekend’s semi-final clash against Chelsea and has lauded the increased competitiveness in the women’s game.

The two sides are set for an epic showdown in their first-leg encounter in Munich on Sunday (kick-off 4pm BST), with both teams currently top of their domestic leagues and on the verge of history, having never made the Women’s Champions League final before.

Chelsea, part of the Women’s Super League (WSL) ‘Big Three’ in England, find themselves in the last four for the third time having lost out to eventual champions Lyon in 2019 and German side Wolfsburg in 2018. 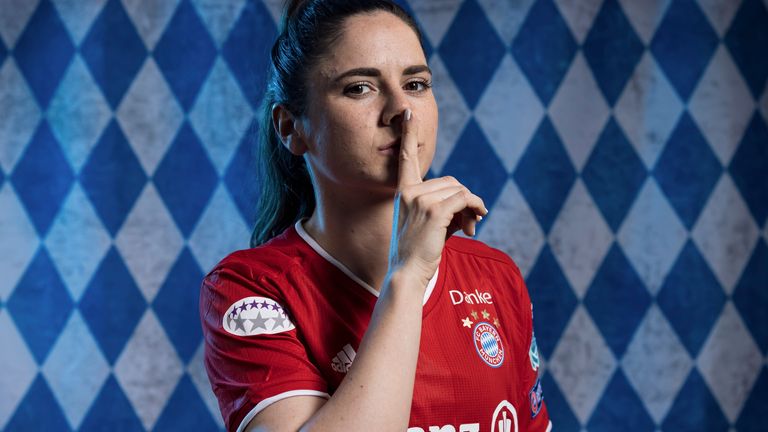 Bayern are also yet to lift the trophy and their only previous semi-final appearance came two years ago – losing to Barcelona – but they impressed the footballing world with their 26-game winning run earlier this season, which was recently ended by Wolfsburg.

Despite Chelsea’s strong season – with the club lifting the League Cup last month, closing in on the 2021 WSL title, and still fighting in the Champions League and FA Cup – Zadrazil revealed she is hungry to “compete against the best”.

“I’m super excited about the game,” Zadrazil, who joined Bayern last year having helped Austria reach the 2017 Euros semi-finals, told The Women’s Football Show, which you can watch on Sky Sports Football from 7.30pm on Friday.

“For me personally, it’s the first year in the Champions League that we made it to the semi-finals. I couldn’t have imagined.

“Chelsea are a really, really good team, like all the semi-final teams. I’m super excited, and I can’t wait to play.

“It’s impressive that they are still up for all the trophies. They are a really good team and they have good individual players.

“We want to compete against the best, so it is a good opportunity for us. We won 26 games in a row. But then we lost in the cup against Wolfsburg.”

In the other semi, Paris Saint-Germain host Barcelona in the first leg earlier on Sunday, with the return legs to be played next weekend. The final will be held in Gothenburg on May 16.

“Women’s football has come closer together,” added Zadrazil. “The level is really high. There are so many teams that can win the [Champions League] title. We are really happy to be part of the last four.”

Sky Sports has announced a three-year deal with the FA to become the primary broadcaster of the Barclays Women’s Super League from September 2021.

As one of the most competitive leagues, with some of the most famous names and teams in the world, the WSL will be one of Sky Sports’ flagship offerings.

The deal will see Sky Sports show at least 35 games exclusively live per season and further strengthens the broadcaster’s commitment to women’s sport.

Watch The Women’s Football Show on Sky Sports Football at 7.30pm on Friday.