Jurgen Klopp has insisted he is confident that Mohamed Salah’s goal drought is ‘completely normal’. Nothing to see here, he appeared to suggest, despite the statistics and visible frustration from the Liverpool superstar proving otherwise.

Salah has suffered heartbreak on the international stage this season and the occasional patches of poor form at club level have done nothing to help alleviate the situation. He remains a top-class player, but now he is one in a bit of a rut.

‘The moment will definitely come,’ Klopp added. Indeed, he is bullish that his talisman will come through to the other side better than ever. To get there first, however, Salah has no choice but to start finding the back of the net again. 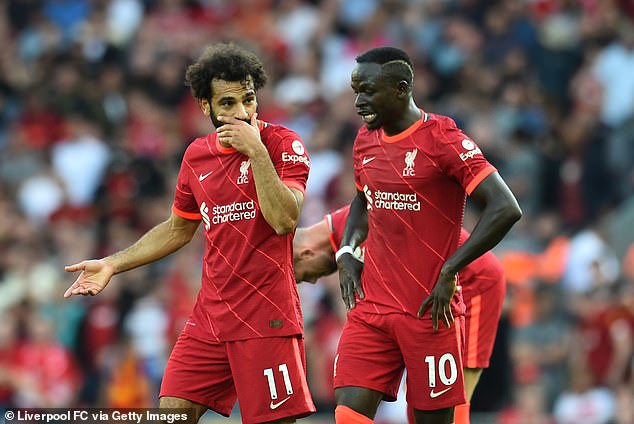 He has not scored in his last four games, and his last strike from open play came two months ago. The period since has been marred by sloppy decision-making, hopeful punts from distance and a lingering feeling of concern from supporters.

The numbers do not lie, after all. Since netting in a 3-1 victory over Norwich on February 19, Salah has attempted 41 non-penalty shots without scoring across all competitions. He has come close at times, but this is a burden that weighs heavily.

Salah has been accused of holding his head down low, perhaps tortured by disappointment with Egypt and a desperation to end his drought. This picture is far from ideal for Liverpool as they push to take home an historic Quadruple. 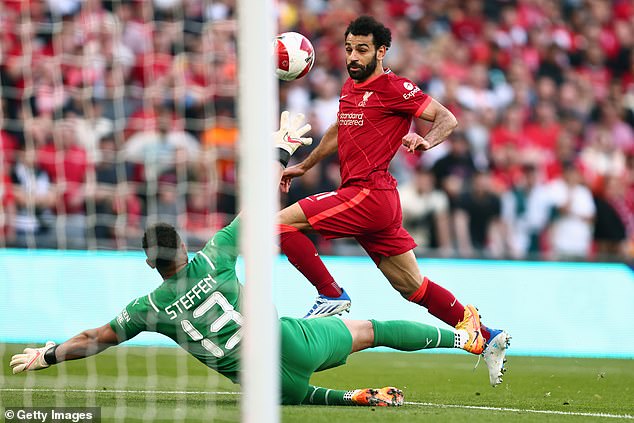 It should not be forgotten that the forward is the top scorer in the Premier League with 20 goals. But since he netted back in February, all of his goals since have come from the penalty spot. They all count, but he will understandably want more.

The raw numbers behind his performances, kindly provided by Stats Perform, reveal everything about Salah’s dip – as well as the newfound prominence of his team-mate, Sadio Mane. The latter has taken the spotlight recently in spectacular fashion.

In this calendar year, Salah has played 16 games for Liverpool, starting 13. In those matches, he currently has six goals to his name, averaging 202 minutes between them. However, just three of these have come away from the penalty spot.

Worryingly, the average amount of minutes that pass before he scores comes to 404, meaning he will find the net roughly once in four and a half games. That alone raises question marks over his showings, and points towards his struggles. 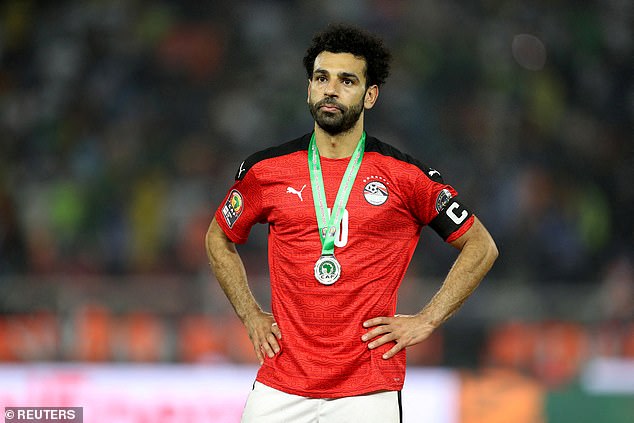 His expected goals per 90 minutes stands at 0.82, despite him averaging around 4.5 shots per game. His shot conversion rate of 10 per cent is another red flag.

Every game, Salah has an average of 10 touches inside the opposition’s penalty area, suggesting he remains heavily involved in play in and around the goal mouth. He has thrived here in the past, perhaps indicating his final decision is letting him down.

A lowly assists return of just two backs this suggestion up. Per 90 minutes, that averages out to just 0.22, meaning Salah’s team-mates aren’t profiting from good work from their team-mate. At such a crucial time of the season, that must change.

The rest of the relevant statistics show he creates a shade under two chances per game, and attempts a reasonable amount of dribbles. Under half of his dribble attempts for his club in 2022 have come off, revealing another area needing work.

Salah went goalless against Arsenal, Watford and Manchester City in recent weeks, and also failed to guide a single shot on target in these games despite having seven attempts. Interestingly, none of his chances could be considered high-quality, either.

His xG (Expected Goals) total against each of those respective opponents came to just 0.2, 0.1 and 0. Some fans are too quick to turn their nose up at xG statistics, despite them giving a fascinating insight into how much of a danger a player poses.

Contrastingly, in his three appearances against Leeds, West Ham and Brighton earlier this year, his non-penalty xG stood at 0.8, 0.8 and 0.6 respectively.

In total, Salah has scored five goals since reporting back from his AFCON dismay. He also has two assists, with other Liverpool players stepping up to cover his drop. 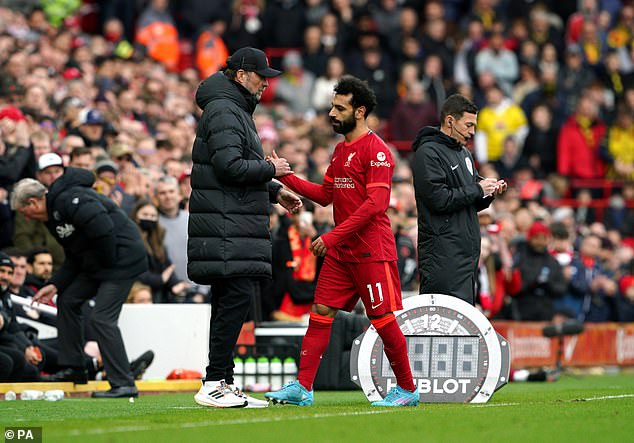 There appears to be a clear difference between his form ahead of the tournament and after. Against Chelsea, his final game before he left to join up with Egypt, he scored one goal at 0.5 xG and created a four shot-creating actions altogether.

But after coming back, his time at Anfield has largely been below-par, despite the occasional glimpse of his former self bursting through, to the delight of supporters.

Nightmarish displays against Burnley and Inter Milan saw him produce an xG of 0.1, although that figure then rose to 1.0 and 2.3 against Norwich and Leeds respectively. He scored in both those games, and even bagged two penalties against the latter.

A drop-off followed, however. Salah drew a blank against West and Inter Milan, scored against Brighton and then failed to net against Arsenal. The final game of that run was marked by an xG of just 0.2 and, staggeringly, no successful dribbles. 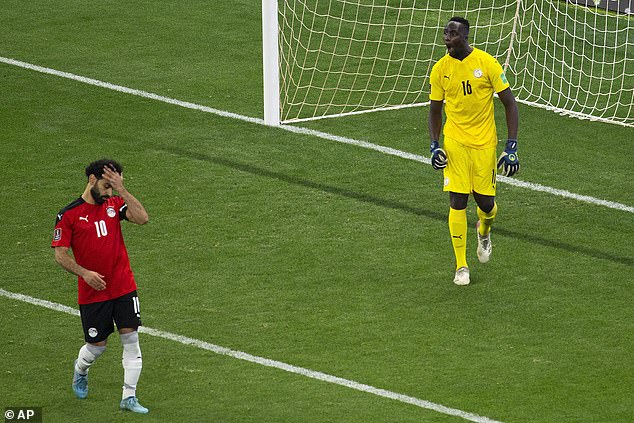 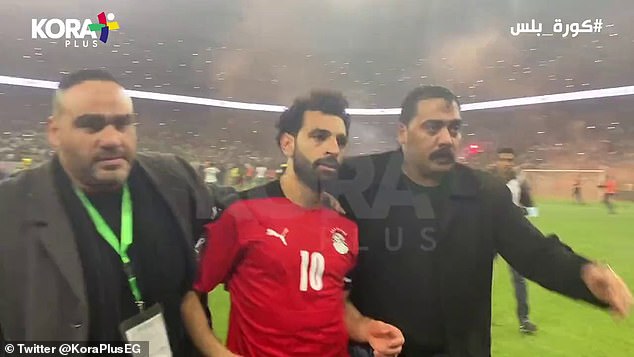 Salah was then made to endure more agony after his dream of leading Egypt to this year’s World Cup was ended by a penalty shootout loss to Mane’s Senegal. He left the pitch surrounded by guards, with missiles thrown at him from the stands.

The superstar was the one who blazed over his country’s first penalty, sparking the beginning of the end. It is no wonder, then, that he has since looked haunted.

After returning to Liverpool, he did not score against Watford, Benfica, Manchester City or Benfica. Salah looked brighter in the recent FA Cup semi-final win over City, but failed to capitalise on the frantic ebb and flow to finally get on the scoresheet.

Contrastingly, while Salah has toiled away with reward, Mane has four goals in his last four games. Two of them came in the Cup win over City, and one in the prior showdown between the same sides, a clash which could have settled the title race. 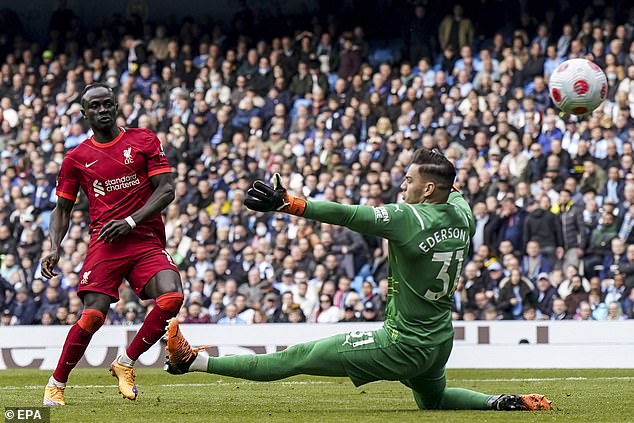 Club legend Jamie Carragher has made no secret of the fact he loves him. It is easy to see why. Mane works hard in every game, seemingly to the point where he is willing to burst a lung. He is also determined, and will chase down every loose ball.

However, until recent weeks he has typically flown under the radar. It was common to see Diogo Jota, Roberto Firmino and, these days, Luis Diaz, take centre stage. Salah’s rut opened the door for him, and he has grasped his chance with both hands.

Against Chelsea, ahead of the AFCON, Mane scored one goal and put up an xG of 0.7. With three shot-creating actions, he was crucial in his side’s forays forward.

He then went on to win silverware and became his country’s hero, having smashed home the decisive penalty that, inadvertently, left club-mate Salah deflated. 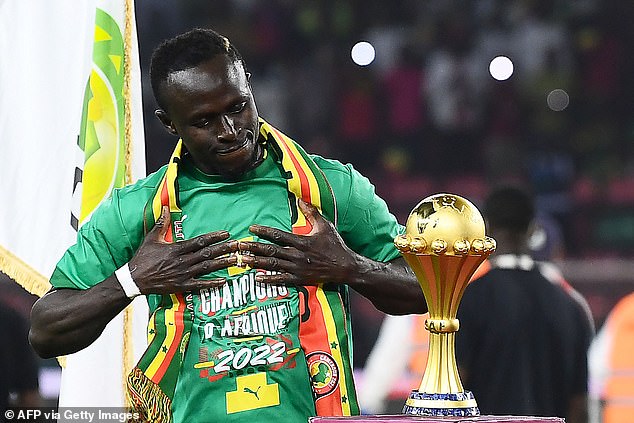 The tricky winger won the AFCON, at the expense of club-mate Salah, and is in a purple patch

From that point, Mane looked to kick on. He may not have scored against Burnley and Inter Milan, but he did find the net against Norwich (with an xG of 0.6 and four SCAs) and then bagged a brace against Leeds – the same tally as Salah.

Further blanks followed against Chelsea and Norwich, before the tricky winger returned to form to score against West Ham – interestingly, with an xG of one.

In the following run of games, he scored against Benfica and Manchester City, and also posed a threat against Inter Milan. While his xG amounts tend to be lower than he may want, he is taking his moments brilliantly and flourishing under pressure.

The background noise between the two footballers is also contrasting. It is impossible to ignore Salah’s contract situation, with the superstar yet to commit to fresh terms. It is well know he wants a pay rise, and talks over that are continuing. 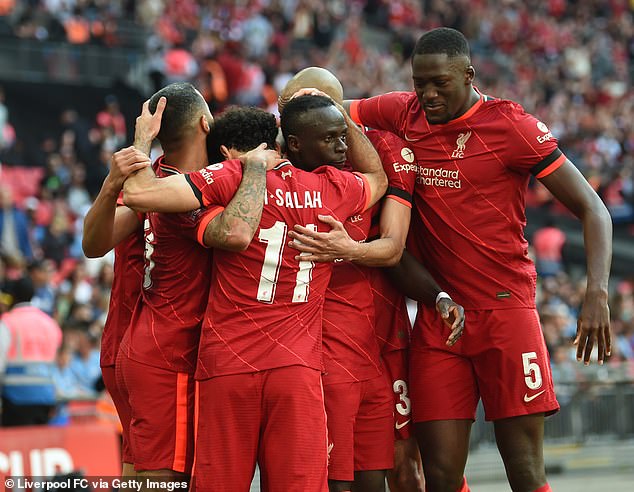 It is far from a hostile situation, with both parties adamant that they want to remain together, but it is one that likely needs a conclusion in the near future.

Meanwhile, Mane has continued to bedazzle opponents in silence. There is not much emotion visible when he scores, either, and it is this cool-headed nature that may be enough to get Liverpool over the line in their quest for more trophies.

His importance has been emphasised by his purple patch this year, while Salah undoubtedly has work to do to reach his usual heights.

He will be under no illusions that, now, his team needs him more than ever, starting against Manchester United tonight.