Home » Soccer » Roy Keane: 'We should give Belgium a bye to the quarters or semis!'

‘We should give Belgium a bye to the quarters or semi-finals!’: Roy Keane hails Roberto Martinez’s side and backs them for easy ride to latter stages of Euro 2020 after win over Russia

Roy Keane was full of praise for Belgium after their 3-0 win over Russia and believes Roberto Martinez’s side will cruise through to the latter stages of Euro 2020.

Romelu Lukaku opened and closed the scoring, with Thomas Meunier netting in between, as the number one ranked side in the world put Russia to the sword in St Petersburg.

Belgium next face Denmark on Thursday before finishing the group stages against Finland, and Keane is confident there is little to trip them up in the early rounds of the tournament. ‘We mentioned about question marks about Belgium’s back three but they’ve done this every game,’ Keane said on ITV.

‘We should give them a bye to the quarters or the semi-finals. When I look at Belgium, particularly going forward, quality is the word that springs to mind.’

Russia managed just five shots in the match, and even without the injured Kevin De Bruyne Belgium were by far the better side throughout. 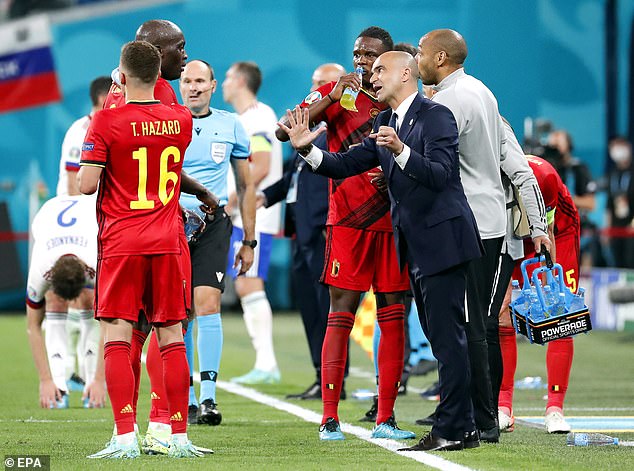 However, Patrick Vieira felt there was very little to take from the performance as Belgium’s biggest weakness was not put under pressure.

‘We didn’t get so many answers about the Belgium team tonight,’ Vieira said.

‘They’ve got a striker who scores a lot of goals. The question was ‘can they defend well’ and we didn’t get the answer.’

Lukaku’s brace means he has now been directly involved in 26 goals in his last 19 appearances for Belgium, with 22 of those goals he has scored himself. The 28-year-old, who dedicated his first goal to Christian Eriksen, has netted 62 times for his country, and Ian Wright believes the striker is good enough to help Belgium finally live up to expectations.

‘Lukaku has got a team where everything funnels through him, Wright said.

‘When you get the kind of time on the ball that Russia gave to Belgium today, you’re going to get chances to score.

How many teams has Odell Beckham Jr. played for? Looking back at OBJ’s stops with Giants, Browns, Rams