‘I wanted to go around the wall to be honest’: Manchester City hero Riyad Mahrez admits he miskicked his match-winning free-kick after failing to bend his strike around PSG’s wall

Riyad Mahrez has admitted that he got his match-winning free-kick against PSG all wrong – despite hitting the back of the net to earn Manchester City a huge win.

The former Leicester star scored from a set piece in the second half of City’s 2-1 triumph in Paris, which puts them in pole position to reach next month’s Champions League final.

But after watching his strike somehow get through PSG’s wall, Mahrez was quick to own up to the fact that he had been attempting to curl the ball around it. 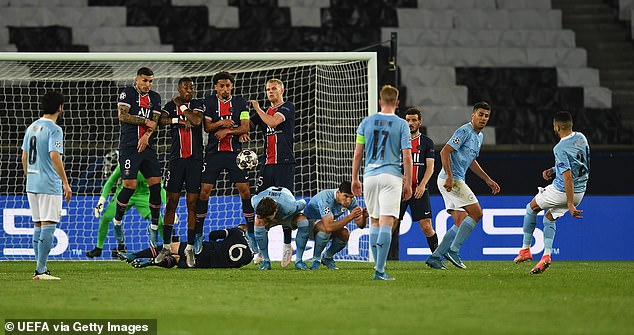 ‘I wanted to go around the wall to be honest and I missed it, it went between the two players and fortunately it was in,’ he said after the game.

‘I was so happy, I knew we could win here and to score to make it 2-1 for the team was amazing.’

Mahrez’s strike completed a brilliant turnaround for Pep Guardiola’s side, who had found themselves 1-0 down thanks to a first-half header from Marquinhos. 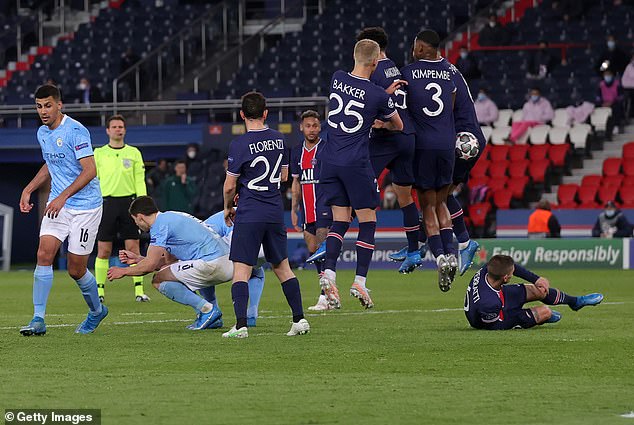 Kevin De Bruyne’s attempted cross caught out Keylor Navas and went all the way in to make it 1-1 on the night, before Mahrez struck in the 71st minute.

The Algerian ran to the touchline to celebrate with substitute Benjamin Mendy, who he later credited with an assist of sorts.

‘It’s all because of Ben,’ Mahrez added. ‘He asked God and God gave me this goal.’ 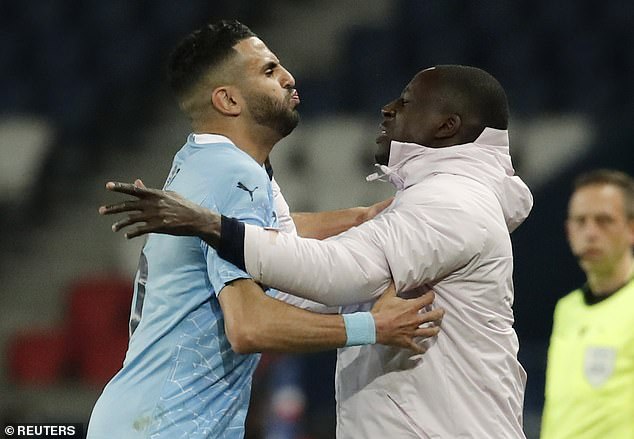 De Bruyne revealed that Mahrez had asked his permission to take the decisive free-kick at the Parc des Princes on Wednesday night.

The Belgian is normally in charge of set-pieces from the edge of the box, but allowed Mahrez to step up and strike with his left foot.

‘I said if you believe in yourself, so who am I to say no? I believe in all my team-mates,’ De Bruyne told BT Sport.