Match report as Ryan Kent, Alfredo Morelos and Ianis Hagi move Rangers to within touching distance of Scottish Premiership crown; Rangers 21 points clear at the summit and will be crowned champions on Sunday if Celtic fail to win at Dundee United Rangers stand on the verge of finally putting a decade of hurt and anguish behind them after a 3-0 win over St Mirren moved Steven Gerrard’s team to within touching distance of the title.

Gerrard and his players had to fight their way into Ibrox past thousands of supporters breaking lockdown rules to celebrate their club’s impending crowning as domestic champions.

And the unbeaten Rangers did not let their expectant faithful down as goals from Ryan Kent, Alfredo Morelos – who now has 15 for the season – and Ianis Hagi ensured they cruised to their 28th win from 32 league games this term.

Rangers may even get their hands on a trophy they last lifted in 2011, before financial troubles forced them to battle back from the third division, as early as Sunday if Celtic slip up away to Dundee United.

If not, Rangers supporters can look forward to the dream scenario of finally putting an end to Celtic’s reign of dominance at Parkhead when they head to the Hoops’ patch on March 21.

Rangers on the brink of title glory 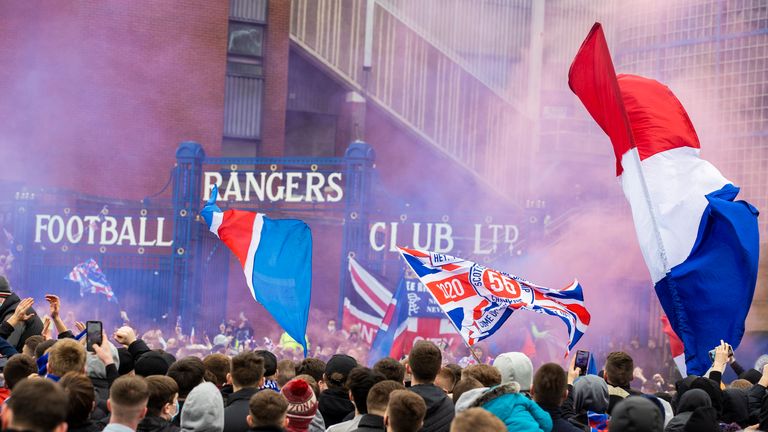 On the sixth anniversary of the boardroom coup which saw Dave King and the Three Bears take control, the Gers support took over the streets to proclaim the long-awaited return of silverware.

The Scottish Government condemned their breach of Covid-19 rules but even the scorn of Holyrood was not going to dampen the mood of jubilation.

Most of the fans had cleared off by the time the game got underway but a small smattering stayed on, hoping to catch a glimpse of their heroes through the gates at the east end of the Main Stand. And it took just 14 minutes for the sounds of their cheers to flood into the stadium as Rangers got the party started.

Ilkay Durmus cut out a Glen Kamara cross but his clearance was aimed straight at Connor Goldson, who immediately put the Buddies back under pressure with a first-time pass into Kent’s feet. The former Liverpool man faked right before driving left past Jake Doyle-Hayes as he drilled a stunning finish past former Gers keeper Jak Alnwick.

It was the early breakthrough Rangers were hoping for but a major blow to St Mirren’s top-six ambitions given they could have sealed their highest finish since 1985 by repeating December’s Betfred Cup upset. But bad went to worse for Jim Goodwin’s men within two minutes as Gers made it two. Hagi worked the ball to Kamara 20 yards out, with the Finland midfielder angling a through ball for Morelos.

The Colombian was running away from goal yet still found the purchase on the ball to pull off a brilliant finish which squeezed past Alnwick before clipping the far post on its way in for his eighth goal in the last 11 games.

Dylan Connolly could have given Saints a lifeline as he put the foot down to surge past Filip Helander but could only cut his shot wide of the target, while Rangers defender Goldson saw a header creep wide as he met Borna Barisic’s teasing set-piece delivery. But the points that leave Rangers with one hand on the league trophy were sealed just a minute into the second half. Joe Aribo released Kent down the left and his pass was perfect for Hagi, who needed just one touch before slamming past the helpless Alnwick.

Gerrard – watching from the directors box after his run-in with John Beaton at Livingston in midweek – gave a satisfied smile, knowing his long wait for a first league title is almost over.

Rangers were heading towards their 30th clean sheet in 45 games this season but needed Allan McGregor to pull off a fine one-handed reaction stop as Jon Obika turned a loose ball towards the top corner.

Alnwick was on form too, denying Scott Arfield and Jermain Defoe late on, but Rangers could not care less. Their long wait to return to the top of Scottish football is almost over.

Rangers travel to Slavia Prague for the first leg of their Europa League last-16 tie on Thursday at 5.55pm, before hosting the Czech side at Ibrox in the second leg the following Thursday at 8pm.

Rangers resume their Scottish Premiership campaign away at Celtic on March 21 at 12pm, while St Mirren travel to Hamilton on March 20 at 3pm.