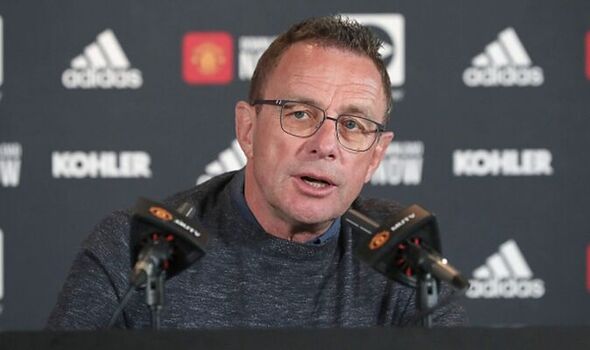 Ralf Rangnick has risked the wrath of Manchester United fans by staking his claim to the recent success at Liverpool. The Red Devils boss worked opposite Jurgen Klopp for a number of years in the Bundesliga, as well as offering his fellow German advice early on in his career.

Rangnick insists that he is partly to credit for Liverpool’s success in recent seasons. The Reds are still capable of pulling off an incredible quadruple this season after reaching the final of the FA Cup over the weekend, having already picked up the Carabao Cup, while they are genuine contenders for the Premier League and Champions League.

Under Klopp, Liverpool have won both of the latter competitions in the last three years. But this could well prove to be their best ever season under the German, who continues to impress at Anfield.

However, eyebrows have been raised by a claim from interim United manager Rangnick, who appeared to suggest he too is responsible for the success on Merseyside. He may have a point too, with several of his former players playing a key role for Klopp these days.

So ahead of United’s trip to title contenders Liverpool, Rangnick staked his claim, saying of Liverpool: “They are good, they are extremely good. It’s no coincidence that they’re as good as they are.

“Jurgen has built that team over the last six-and-a-half years. Six or seven of those players used to be my – or our – players. We signed them for our clubs when nobody knew them and again it’s no coincidence that this is probably the club with the highest number of players from our former clubs. Their approach, their style of football, the way they want to play is pretty similar.”

Rangnick opened up on his relationship with Klopp last December ahead of their first encounter, admitting that the pair have known each other for a long time, but insisting that he only ever offered him some friendly advice.

“Jurgen and myself have known each other since 1997,” Rangnick explained. “I was not his mentor – that was a coach called Wolfgang Frank – but we have always been in contact and had a good relationship with each other. We respect each other and that will continue.

“I remember before Jurgen became head coach at Mainz and he called me. I was at Ulm at the time and Jurgen asked me what kind of money he should be asking for from Mainz. He didn’t have an agent, so I told him.

“In a way, I was his agent and I advised him what he should ask for. Jürgen said “ah, do you not think that is too much to ask?” I told him it was the right thing to do – and I am pretty sure he got what he wanted.”