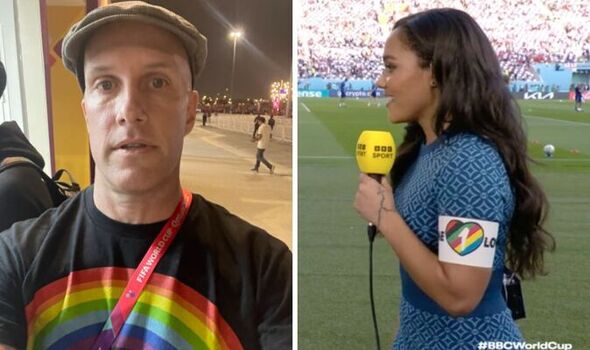 US sporters reporter Grant Wahl has detailed how he’s been denied entry into Wales’ game against the United States for their World Cup opener for wearing a t-shirt featuring a rainbow theme in tribute to LGBTQ+ rights. The 2022 tournament has been clouded by controversy ever since Qatar were named as the first Middle Eastern country to host a World Cup.

Reports have pointed out the conditions migrant workers worked in during the construction of the stadiums in the Gulf state while multiple deaths were recorded. But LGBTQ rights have also been in the limelight with homosexuality illegal in Qatar under Islamic State Sharia law.

Khalid Salman, an ambassador for the World Cup, just last week described homosexuality as “a damage in the mind”. And there was a huge debate between FIFA and a number of European countries heading into the opening round of fixtures over the OneLove armband campaign.

England, France, Germany and four other European countries were planning to continue wearing the OneLove armband which features a heart-shaped multi-coloured logo. But FIFA raised the prospect of captains being shown yellow cards should the teams go ahead with wearing the armbands.