PSG v Man City: Neymar ready to do talking on the pitch

Neymar has insisted he is happy at Paris Saint-Germain and has hinted that he would be open to signing a new contract with the French giants. The Brazilian star’s current deal is set to run out next summer and his contractual situation has led to speculation over his future at PSG.

The 29-year-old has scored 14 goals in 24 games across all competitions for PSG this season and, alongside Kylian Mbappe, is the key to their chances in the Champions League.

The Brazilian was repeatedly linked with a move back to former club Barcelona earlier this season, but the arrival of Mauricio Pochettino in January and PSG’s continued progression in the Champions League appears to have settled things down.

After the Parisiens overcame defending champions Bayern Munich on away goals in the quarter-finals, Neymar said that his “contract extension with PSG is no longer a topic”.

Now, ahead of Wednesday’s Champions League semi-final against Manchester City, he has reiterated that stance, pouring cold water on any further transfer speculation.

“I have got time on my contract here at PSG. We want to do what is the best for everyone,” he told reporters on Tuesday. 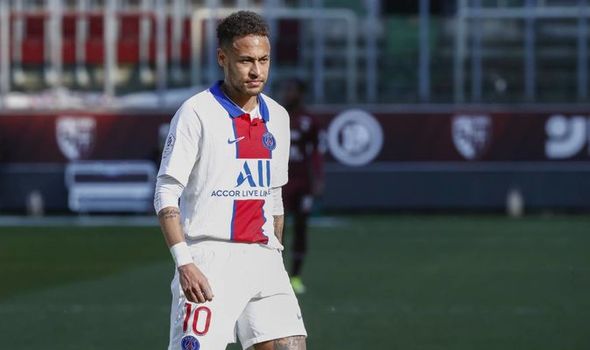 “I have already said that I am happy here and I feel much better than in the previous seasons.”

Both Neymar and Mbappe’s current contracts are set to expire in June 2022 but PSG sporting director Leonardo said at the weekend that the club are at ease with the situation.

“Nobody is running behind us, we are really quiet, we have very good and frank reports,” he told Canal+ ahead of PSG’s 3-1 win over Metz on Saturday.

While they remain in a title race in Ligue 1, sitting one point behind Lille with four games left to play, Neymar’s attention is firmly fixed on the Champions League after last season’s defeat against Bayern in the final.

“Since I arrived here, the club has improved, the club is more respected,” he said.

“When people talk about PSG now, they know it is among the four, five, six best teams from across all the leagues. Now PSG is getting the respect it deserves.

“This year, we are going to do everything to get our hands on the trophy.

“When I joined PSG, I said our priority was always the Champions League and winning it and being amongst the best. We managed to reach the final last year for the first time in the club’s history.

“Now, we are in the semi-finals. This means we have been improving and that is down to the people, the coaching staff, and I think we have everything it takes to be champions. We are on the right path.

“I think everything is on track, we have to keep working hard and playing well in order to win the trophy that we want.”