Conte expects Tottenham to be better after four losses to Chelsea

Express Sport brings you all the latest on the second weekend of the new Premier League season and we have a mouthwatering Super Sunday clash between two sides expected to be the best of the rest behind Manchester City and Liverpool.

Antonio Conte takes his Tottenham side to former club Chelsea looking to build on their 4-1 thrashing of Southampton last time out. Meanwhile, Thomas Tuchel will be hoping his Blues outfit will be much improved on their performance from the opening weekend, where they limped past Everton 1-0.

Before that heavyweight fight gets underway, European hopefuls West Ham will look to kickstart their campaign against new-boys Nottingham Forest. The Hammers were downed 2-0 by Manchester City on the opening day and Forest lost by the same scoreline against Newcastle.

Express Sport brings you all the latest team news, goals, reaction and breaking news throughout the day below. 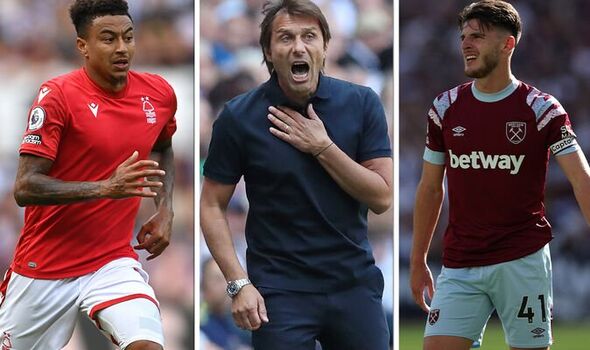 Hammers and Forest team news on the way…

West Ham and Forest team news should be released in about 20 minutes time but here is what we know ahead of that announcement.

Hammers boss David Moyes has confirmed that he could unleash new signings Gianluca Scamacca and Maxwel Cornet as Michail Antonio struggled to train on Friday. The east Londoners have a problem in defence with Craig Dawson and Angelo Ogbonna ruled out through injury, meaning Ben Johnson is likely to remain at centre-back.

Goalkeeper Lukasz Fabianski is also in a race to be fit after being withdrawn against City last weekend after picking up a knock.

Good afternoon and welcome to our live coverage of two exciting Premier League fixtures. The new season has already thrown up many twists and turns with Liverpool dropping points on the opening weekend against Fulham and Man Utd going down 4-0 at Brentford yesterday.

There is bound to be more fireworks as Antonio Conte and Thomas Tuchel clash at Stamford Bridge this afternoon, but not before Jesse Lingard faces his former side West Ham with Nottingham Forest.