Leading Scottish newspaper The Scotsman has reported that the Melburnian, who is in charge of Japanese J-League club Yokohama F Marinos, is the new favourite to take charge of the Old Firm giants after former English Premier League manager Eddie Howe turned the job down. 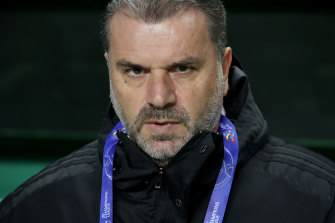 Other rivals in contention for the high-profile post are said to include current Scotland boss Steve Clarke, ex-Manchester United and Ireland captain Roy Keane and the former Borussia Dortmund manager Lucien Favre.

The Age has made several attempts this week to contact Postecoglou, who has also been named the new favourite for the position by two British bookmakers.

Should the 55-year-old succeed Neil Lennon it would be the greatest breakthrough so far for an Australian coach into a major overseas market.

Kevin Muscat and Tony Popovic have both coached in Europe – the former in Belgium, the latter in Turkey and Greece – but neither was able to stay in a job for long. Socceroo boss Graham Arnold also had a brief spell in Japan.

While Celtic fans are reportedly in meltdown over the prospect of the little-known Australian – in European markets – getting the job, he has certainly earned the right for a tilt at a job such as Celtic.

Postecoglou was a title-winning player and coach at South Melbourne in the NSL, and after a coaching spell in Greece, subsequently created the Roar team that won two A-League titles and set a record for the number of matches it played without loss, before a season at Victory led to him being appointed Socceroos boss.

His greatest triumph with the Socceroos was to win the Asian Cup on home soil in 2015.

The Celtic job comes with enormous pressure as it is Scotland’s biggest club and is locked in a bitter rivalry with Glasgow rivals Rangers, who are in resurgence under former Liverpool and England star Steven Gerrard.

Rangers won the Scottish title this season, stopping Celtic from winning 10 in a row.

According to reports in Scotland, Howe was over the line until Friday, when claims that there were issues with the coaching team that he wanted to bring in led to his withdrawal.

A club statement said: “As part of the ongoing process we have engaged with a number of candidates. We fully appreciate our fans will be seeking clarity on this matter and we aim, very shortly, to announce the appointment of a manager with the quality and desire to take Celtic forward and bring further success to our supporters.“

In a recent interview with the Fox Football Podcast, Postecoglou said he planned to remain overseas for the rest of his career.

“As a family we’ve made a decision we’re going to stay overseas for the rest of my career and see where else we can make an impact. Maybe it’s here [Japan], maybe I stay awhile and build something special, or it could be somewhere else.

“I want to produce teams that play a certain way that gets people talking and have success obviously, because if I don’t have success, I’m not going to have a job.”

Celtic have had positive experiences with Australians before, with Mark Viduka and Scott McDonald starring, while current Socceroo midfielder Tom Rogic is part of the squad.