Paul Pogba wasn’t keen to hang around when his France team-mates Kingsley Coman and Presnel Kimpembe asked him about joining Paris Saint-Germain.

The Manchester United midfielder is out of contract with the Red Devils at the end of next season and his agent Mino Raiola has regularly talked up the possibility of him leaving the club.

Real Madrid and Juventus are the two main clubs have to have been credited with interest but PSG would be able to afford his wages and a hefty transfer fee, should they be interested. 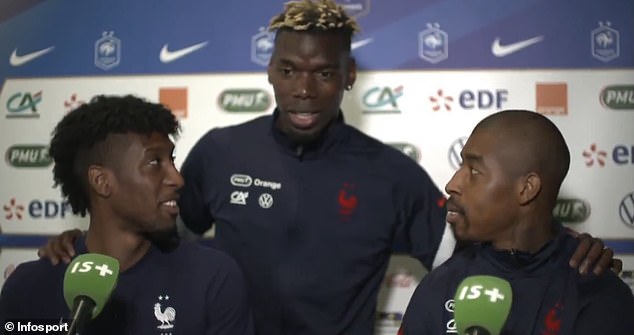 Pogba has ruled out a move to the French club in the past because both of his parents are fans of rival club Marseille. However, Coman and Kimpembe decided to have some fun by stirring things up during a France press conference.

After the United midfielder had crept up on his team-mates, Kimpembe said: ‘We’re talking about Paris,’ to which Coman added: ‘Yeah, you’re Parisian aren’t you?’

A perplexed Pogba replied: ‘Yeah, so?’

Coman then made reference to to PSG’s president Nasser Al-Khelaifi by saying: ‘Nasser, any contact?’ 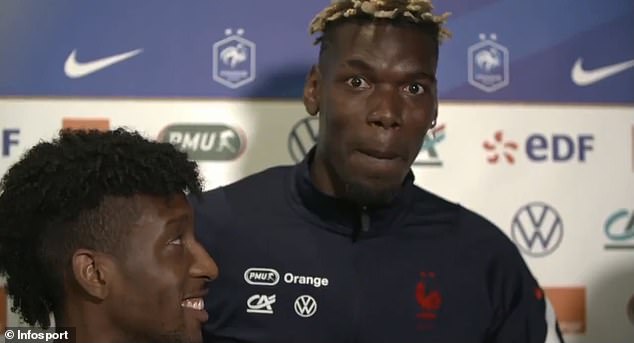 Kimpembe then added: ‘The transfer window is soon,’ with Coman asking again: ‘Any contact?’

Pogba quickly replied: ‘No!’ before making a hasty exit while his team-mates burst into laughter.

The 28-year-old is firmly focused on helping France win the Euros this summer but his future at Old Trafford remains up in the air.

Super agent Raiola was adamant he would leave the club earlier in the season.

‘I can say that it’s over for Paul Pogba at Manchester United,’ Raiola told Italian newspaper Tuttosport in December. 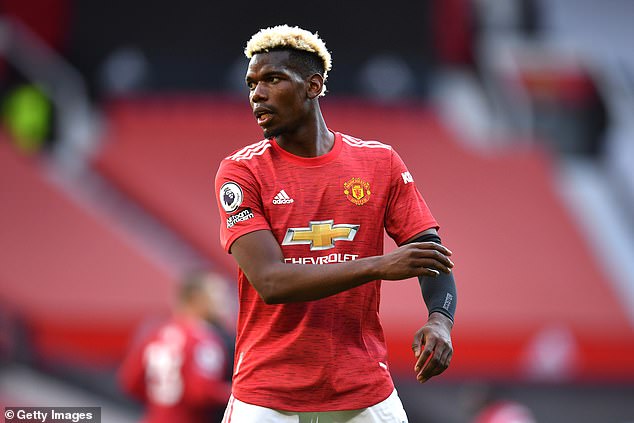 ‘He has to change teams, he has to change the air. He has a contract that will expire in a year and a half, in the summer of 2022, but I believe the best solution for the parties is to sell in the next market.

‘Otherwise, the club, with whom relations are excellent, knows well that they would risk losing him on a free transfer, given that for the moment it is not the player’s intention to extend the contract.’

But Pogba played a key role in Ole Gunnar Solskjaer’s side finishing second and reaching the Europa League final and could still sign a new deal with the club.