ON THE ROAD: Pilgrims make progress at the Theatre of Greens as Plymouth skip over Ipswich to reach the summit of a League One now littered with former Premier League teams

If the future of English football rests on green energy then Home Park is a good place to start because Plymouth Argyle are generating a genuine homespun buzz amid the former Premier League clubs at the top of League One.

With the place packed to the rafters today they roared on Steven Schumacher’s team with their shirts the colour of spinach and a fighting spirit to the finish to make cartoon sailor Popeye’s biceps bulge with pride.

It proved too much for Ipswich, who led at half-time but surrendered their unbeaten start as east met west in Devon. 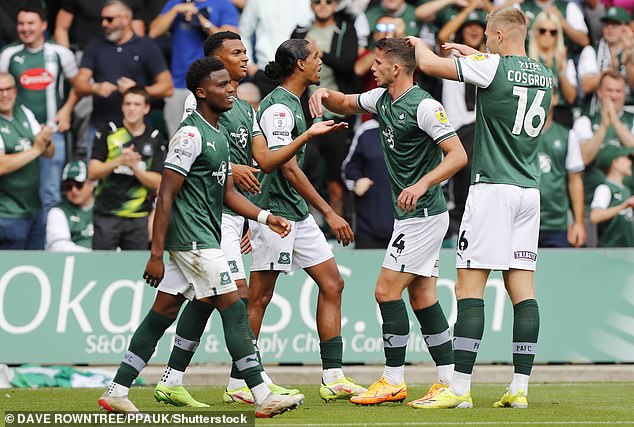 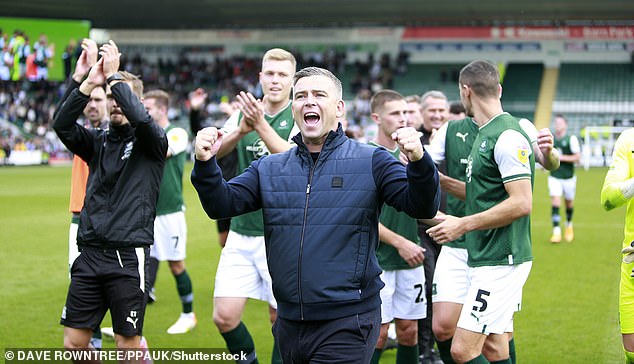 Argyle skipped over their visitors to the summit and sent supporters home with their hearts soaring and promotion hopes fuelled with adverts for season tickets flashing on to digital screens outside the ground.

‘The city is responding,’ said Schumacher, who roamed the pitch at the final whistle pumping his fist as his players stood to salute the Devonport End, like Borussia Dortmund before their Yellow Wall.

‘We’re selling out, that’s a good sign. They’re enjoying what they’re seeing, and we’re getting results. There’s a good atmosphere and we hope it continues because Argyle are a massive club in the South West, it’s brilliantly supported home and away, and we want to make them happy.’

Drinks flowed in the Green Taverners bar behind the Mayflower Grandstand on a day when the Pilgrims paid tribute to Dave Smith, a hugely popular former manager affectionately known in these parts as Ciderman. 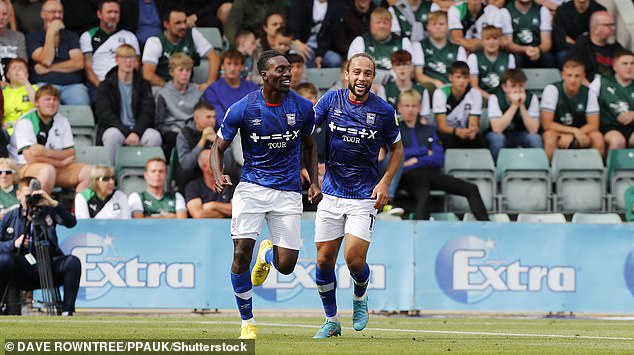 Smith, who led Argyle to promotion from the third tier in 1986 and to seventh in the second tier a year later, died at the age of 88 on the same day as Queen Elizabeth II.

A banner was raised in honour of Ciderman during the minute’s applause that preceded a thrilling contest before a crowd of 15,480.

‘It was fitting,’ said Schumacher. ‘We didn’t get the opportunity to do that last time because of the passing of the Queen but Dave Smith is an Argyle legend, a top manager and I’ve heard a few stories about him and his poetry.

‘It was a fitting tribute to him and the performance and the win topped it off.’ Success is sweeter when times have been tough. A dozen years have passed since Plymouth last competed at Championship level.

Relegated in 2010, they were plunged into a financial crisis and flirted with extinction as they tumbled, almost suffering relegation from the EFL before a revival under the ownership of US businessman Simon Hallett. 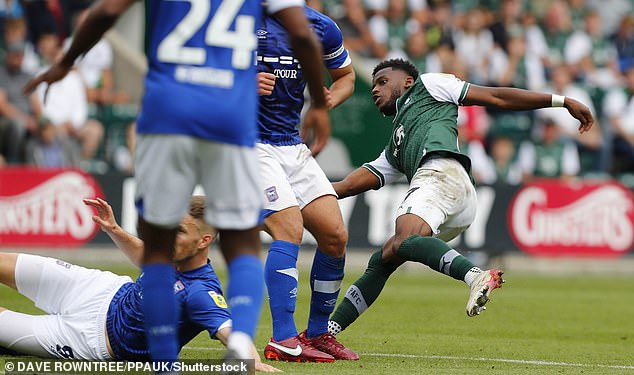 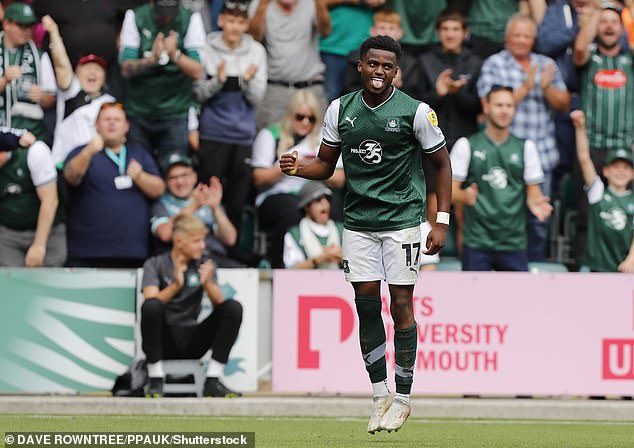 Mumba, on loan from Norwich, has become a fan favourite among the Home Park faithful

‘It comes down to good planning behind the scenes,’ said Schumacher, who stepped up from assistant to continue the work of predecessor Ryan Lowe, who left for Preston in December.

‘The owner has a vision and the board have a plan, and it’s up to the coaching team and the players to carry out that plan.

‘Into League One, we stabilised and last season went close to the play-offs. If we can go one better that will be incredible.’

Competition is fierce in a division containing seven clubs with Premier League pedigree, including Ipswich, who travelled to Devon as leaders.

On a weekend of dreary international fare, this was pulsating, high quality and committed — testament to the bold natures of their impressive managers Schumacher and Kieran McKenna. 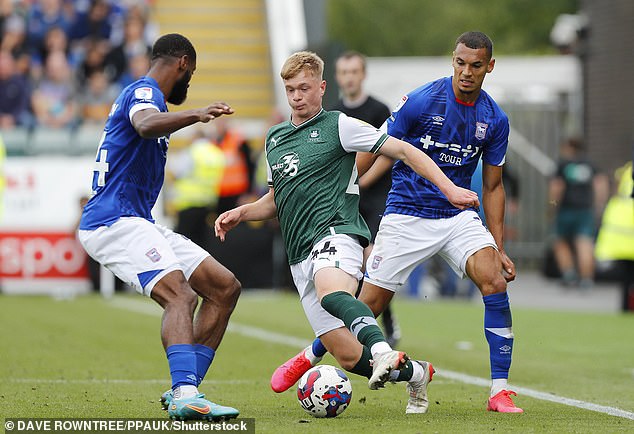 Ipswich were grateful for one of football’s unwritten rules as they struck first through former Plymouth striker Freddie Ladapo, his first league goal after a summer move from Rotherham.

Ladapo burst clear when a tackle in midfield saw the ball ricochet into his path. Dan Scarr recovered but his sliding challenge only deflected Ladapo’s shot and spun it beyond goalkeeper Michael Cooper.

Bali Mumba levelled midway through the second half, pouncing on a loose ball outside the Ipswich penalty area and firing in from 20 yards with his right foot.

Mumba, on loan from Norwich, will be the toast of Norfolk after toppling their rivals. 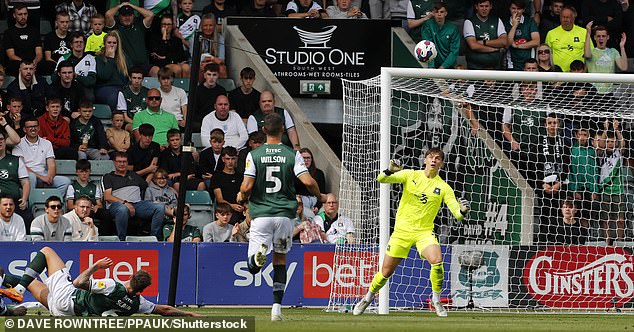 The winner also flew in from distance. Morgan Whittaker won the ball, traded passes with Joe Edwards and unleashed a screaming shot into the top corner.

‘We’re top of the league,’ rang around Home Park but there were scares and a cluster of fine saves were needed by Cooper, including one in the final seconds to deny his opposite number Christian Walton, another former Argyle favourite who went up for a corner and met it with a firm header.

Cooper turned it against the bar with his fingertips and defenders converged to block the rebound. Nothing would subdue the mood at the Theatre of Greens.