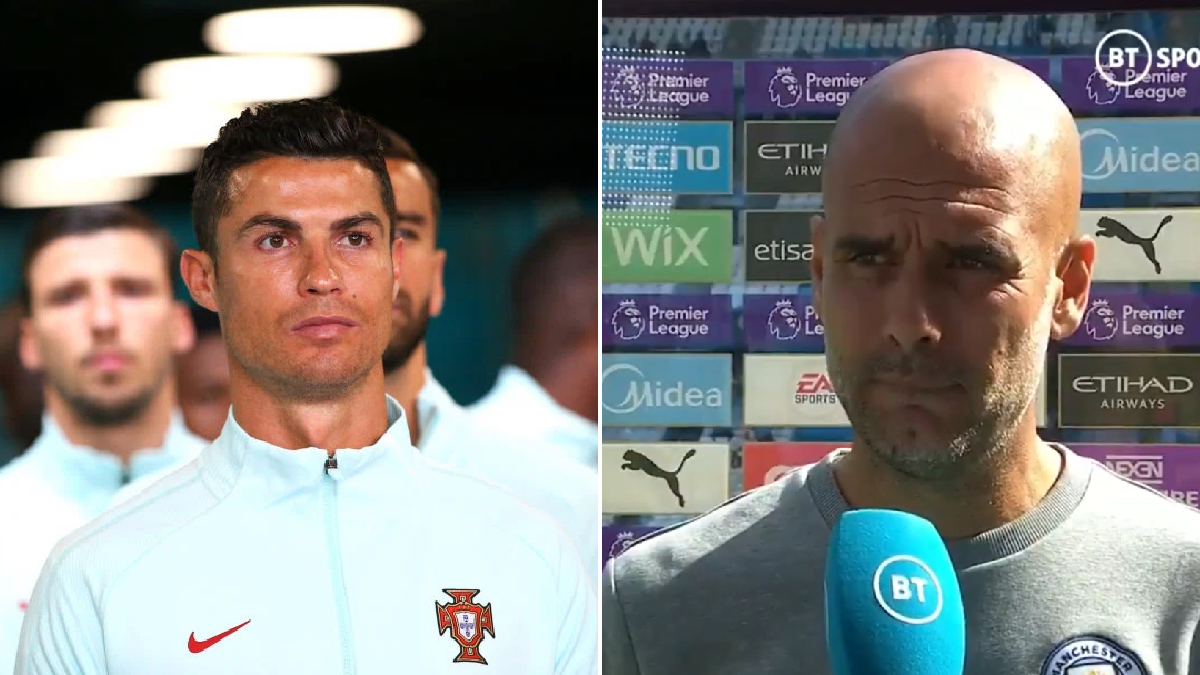 Pep Guardiola insists he is ‘not frustrated’ that Manchester United beat Manchester City to the signing of Cristiano Ronaldo and says his return to England is ‘good news’ for the Premier League.

Sir Alex Ferguson and a number of Manchester United legends intervened, however, and urged Ronaldo not to join City and instead complete a stunning return to Old Trafford.

On Friday, Man United confirmed they had reached an agreement to re-sign Ronaldo from Juventus, with the Portugal legend now set to undergo a medical ahead of his unveiling.

Guardiola was asked about Manchester City’s failed move for Ronaldo ahead of the club’s Premier League clash against Arsenal on Saturday and played down the importance of his switch to United.

‘Frustrated is not the right word, we have an exceptional squad,’ Guardiola told BT Sport.

‘We are not frustrated, it’s good that a player like Cristiano is back in England. It is good news for the Premier League.’

“Frustrated is not the right word, we have an exceptional squad.”

“It’s good that a player like Cristiano is back in the Premier League.”

Rio Ferdinand, who was one of the former Red Devils stars who helped persuade Ronaldo to return to Manchester United, expects his ex-teammate to thrive this season.

‘Cristiano left here the best player in the world and he turned up in Manchester as someone who was about entertaining and skills etc but he’s very much a man about stats now and you see he’s level last season,’ Ferdinand said.

‘Chelsea brought in a striker for £98million, yes different ages and profile etc but Ronaldo outscored him in Serie A last season. That tells you the level that he’s at.

‘He’ll come in and score goals and more importantly around the training ground and at this football club, there isn’t anyone else better equipped to show them how to win, consistently at Manchester United, he’s the guy for that.’