Manchester United lost 2-1 to Istanbul Basaksehir in the Champions League on Wednesday with Ole Gunnar Solskjaer’s position back in the spotlight; Man Utd have made their worst start to a season since the David Moyes era, and worst start at Old Trafford in almost half a century

Paul Merson says Ole Gunnar Solskjaer’s next game against Everton is the “biggest of his managerial career” as he tries to get Manchester United’s season back on track.

Solskjaer’s side are 15th in the Premier League with only two wins from six matches and are reeling from a calamitous 2-1 defeat to Istanbul Basaksehir in the Champions League on Wednesday.

It has once again brought Solskajer’s position as Man Utd manager under scrutiny and Sky Sports pundit Merson believes their next game at Everton on Saturday is a must-win for the Norwegian.

He told Soccer Special: “Solskjaer will be under severe pressure. Let’s be honest, this is Manchester United, the biggest club in world football, and where they are in the league is not acceptable. It’s not like only two or three games have gone. And not only that, the performances have been poor.

“The way they capitulated against Tottenham, Arsenal weren’t great but did a job on them. United looked lost, and then they went to Istanbul, who are not a top European team, and they have been beaten. 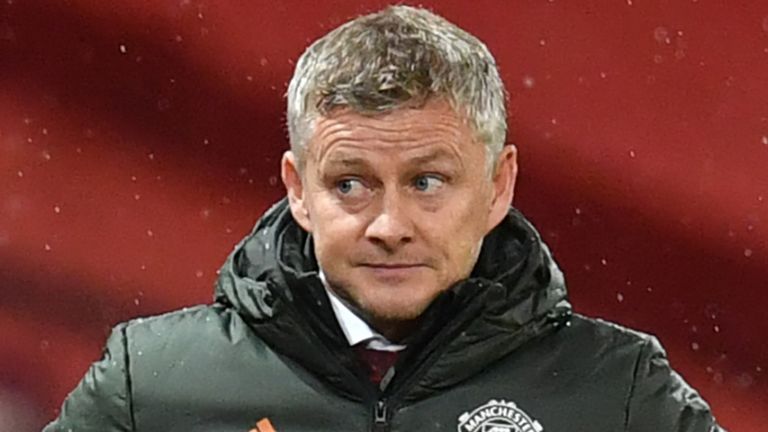 “(Mauricio) Pochettino was on Sky Sports on Monday. It all comes down to timing. Managers go on Sky because they want to be seen, and then people say, ‘I forgot Pochettino was out of a job’. I’m not saying Manchester United will say that, but fans and people do and it [the rumours] get going.

“If you look at Solskjaer’s record, he goes on streaks of six or seven wins, but then he could go four or five games without winning. You cannot have that, when you’re a top club like Manchester United and you want to win Premier League titles, you have to nip poor form in the bud early.

“Let’s face it, United are out of the title race. People keep saying the Premier League is open this season but who’s top of the league? Liverpool. The top team are still top. For the last 50 years and the next 50 years, you can’t get rid of 25 players, you just get rid of the manager.”

“From what I’m being told, Man Utd still see Ole Gunnar Solskjaer as a long-term project and someone that should be given the backing and support to do this job. I don’t think anything has changed.

“The question stemming from that is what is their reaction to the last couple of games? The answer is it’s not good. The defeat against Arsenal with a soft penalty given away by Paul Pogba and the circumstances of last night up against a side who have never scored a Champions League goal and scored two with Man Utd having just two shots on target the whole game, bearing in mind Solskjaer had most of his key players out and playing in Istanbul last night.

“There’s another way of looking at this. A week ago, we were saying ‘what an amazing coach’ and that things had changed under Solskjaer. He out-thought RB Leipzig, he won 5-0 at Old Trafford and everything seemed to be changing. The flip side to that, of course, is how did those players beat Leipzig 5-0 and then put in the performances that we’ve seen over the last couple of games.

“There are major question marks against this. You saw what Solskajer had to say last night, he was furious with what happened in Istanbul. He protected his players, he didn’t criticise them too much but I think you could see from the manner of his voice, the tone of his voice that he’s expecting a big turnaround against Everton at the weekend.”

Manchester United looked to be heading upwards when they qualified for the Champions League following a strong end to the 2019/20 season. Fast-forward three months and they are 15th in the Premier League and reeling from an embarrassing defeat to Istanbul Basaksehir.

The Champions League had provided a welcome distraction from domestic difficulties for Ole Gunnar Solskjaer’s side, but, having beaten Paris Saint-Germain and RB Leipzig, their shortcomings were exposed in an abject defeat on the banks of the Bosporus on Wednesday evening.

Manchester United were supposed to push on this season, they were supposed to build on that late surge which secured a top-four finish on the final day. Instead, they have made their worst start since the David Moyes era, and worst start at Old Trafford in almost half a century. After all the promise, how did we end up here?

Solskjaer labelled Manchester United’s defending in the 2-1 defeat by Istanbul Basaksehir as “unforgivable”, but laughed off suggestions his job is under threat.

“The performance wasn’t good enough against a team that worked and ran,” Solskjaer told BT Sport. “They hit us on the break a couple of times and scored two goals like you sometimes do in Europe when you don’t defend well enough.

“The first one we forget about the man up top and that’s unforgivable. The second one, we’re not very well organised to counter-press and win the ball back when we’re playing. So two tough goals to give away and then we didn’t have enough to come back second half.

“We scored from a cross, a good goal by Anthony (Martial), and then you think 45 minutes to save something from the game but second half we threw everything at it but we couldn’t break them down.

“It’s not easy to be positive now. Of course it isn’t when you’ve just lost the way we did. But these players, they’re good players and we have a chance on Saturday morning to get going again.”

Klopp likely to be furious after Christmas TV fixtures are revealed