Thierry Henry has insisted that he would still pick Kylian Mbappe in his team ahead of Erling Haaland despite the Manchester City scoring another two goals against Sevilla in the Champions League on Tuesday.

Haaland scored in both halves, either side of a Phil Foden strike, before Ruben Dias netted from close range in added time to wrap up a comprehensive 4-0 win for Pep Guardiola’s men.

Mbappe also scored a brace in a 2-1 victory for Paris Saint-Germain over Juventus, and Henry still prefers his French compatriot to Haaland – despite the Norwegian scoring 12 goals in his first seven matches for City. 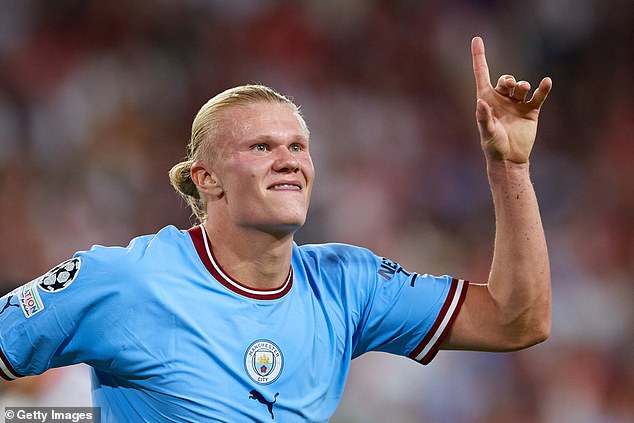 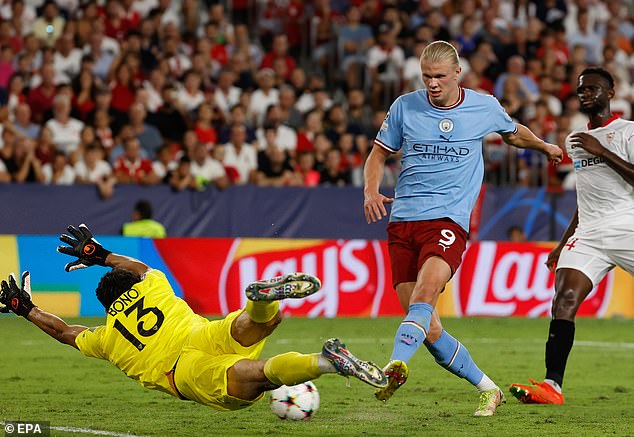 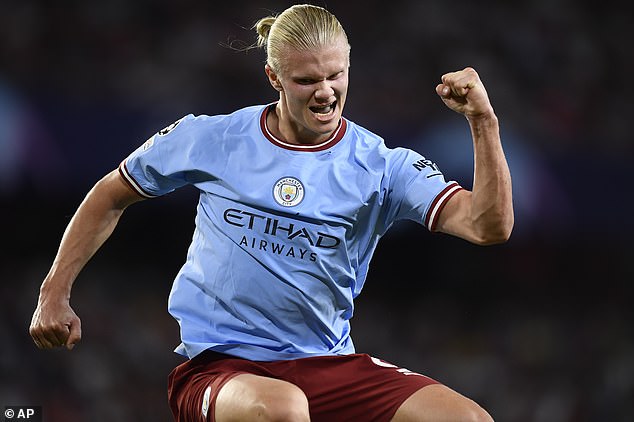 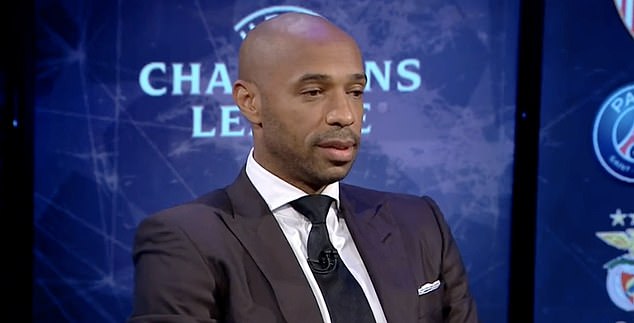 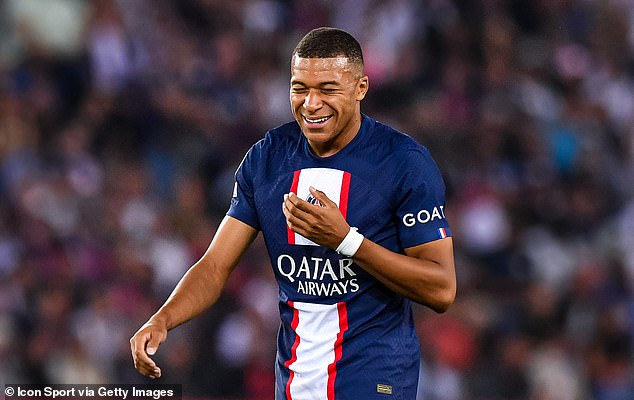 Mbappe scored twice against Juventus, but has not scored as many as Haaland this season

‘He is a magnificent player and with him they can win the Champions League last year against Real Madrid. If it was him at the end of those chances that they missed, they will have been focused on scoring one or two. For now, Mbappe is still my vote.’

Mbappe also scored twice on Tuesday as PSG edged past Juventus 2-1, but he has been unable to keep up with Haaland’s goalscoring exploits so far this season as he has currently found the net nine times.

Haaland has made a stunning start to his City career, and Owen Hargreaves does not see him slowing down any time soon.

He believes the 22-year-old will break Mohamed Salah’s Premier League record for a 38-game season, when he scored 32 goals in 2017-18, and he has tipped the Norwegian to score 45 goals in all competitions. 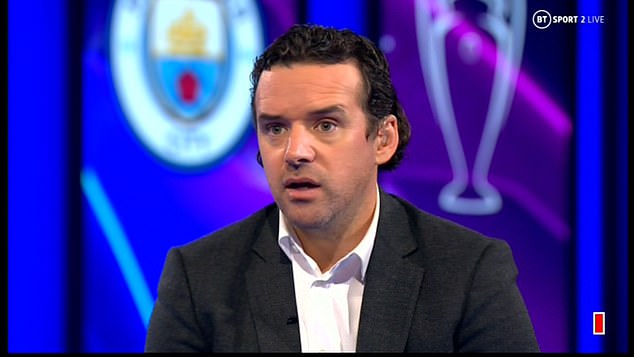 When asked how many goals Haaland will get, Hargreaves told BT Sport: ’45, I think, in all competitions. I think he breaks the Prem one (record) and gets 45 overall.

Hargreaves was joined in the studio by Rio Ferdinand and Joleon Lescott, and they both agreed that Haaland has every chance of scoring more than 40 goals this term.

‘I reckon he gets 41,’ Ferdinand predicted.

City are set to play three times a week through until the start of the World Cup in November, and they will also be expected to go deep in all four competitions that they are involved in this season.

With that in mind, Lescott did point out that Haaland may have to be rested from time to time which could affect his chances of hitting such outrageous numbers. 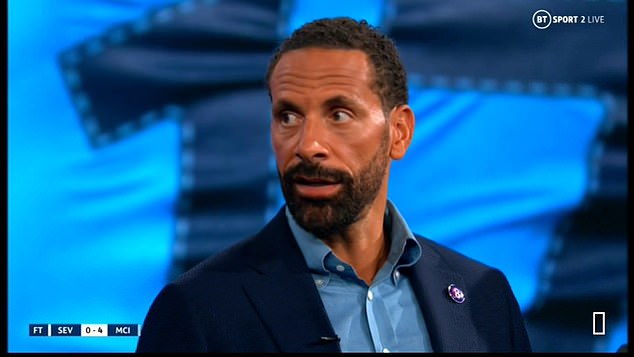 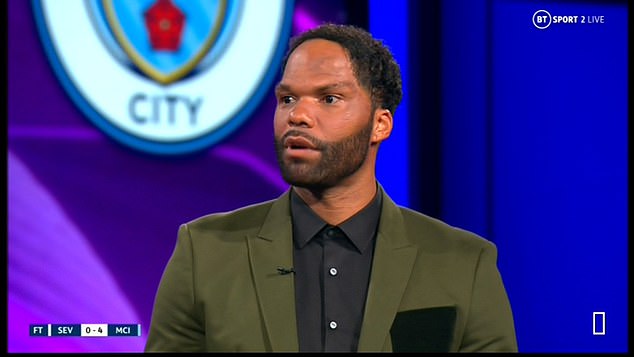 ‘I think he can keep up the ratio. I just don’t know if he’s going to get enough games,’ he said.

However, Ferdinand responded by highlighting that Haaland will not be at the World Cup due to Norway failing to qualify, and suggested that he could benefit from the break in domestic action.

‘The one thing he’s got in his favour is the World Cup. He’s not going to the World Cup so in his mind he’ll be thinking: “I’m rested, I surely have to get more opportunities to get more goals.”

‘I would definitely say that’s one thing in his favour in terms of getting to those numbers that we’re talking about,’ Ferdinand said.

Meanwhile, Guardiola was delighted to see Haaland get on the scoresheet again, and he praised the striker’s hunger for goals. 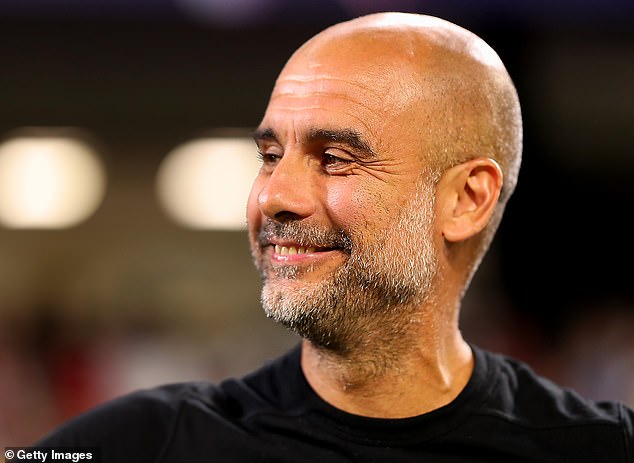 Pep Guardiola is delighted with Haaland’s start, and hopes he can continue to score goals

‘I think his numbers in his career, not just here but in previous teams, are quite similar,’ he said in his post-match interview.

‘He has an incredible sense for goals. He scored two, he had the chance to score two or three more. He has incredible numbers so we have another final on Saturday against Tottenham and hopefully he can continue scoring goals.’

Haaland scored 86 goals in 89 matches for Borussia Dortmund, while he also netted 29 times in just 26 games for Red Bull Salzburg before moving to Germany.

These figures indicate that he tends to score approximately one goal per game, and with City in line to play in excess of 50 matches this season, he is on course to prove Hargreaves and co right with their predictions.