OLIVER HOLT: The Southgate Out mob are doing far more to hurt England’s hopes than starting with Jack Grealish on the bench… the reality is that they have a far better chance of winning with him than without him

It is the eve of the first game of the World Cup in Qatar and the England team news has leaked out. Jordan Pickford has survived in goal because he can play a bit. Marcus Rashford is right back and Raheem Sterling is left back. Jack Grealish and James Maddison are at centre half.

Jadon Sancho is up front, Phil Foden is up front, Adel Taarabt, who has been poached from Morocco and given special dispensation to play because he cannot defend to save his life, is up front. Harry Kane is up front, Bukayo Saka is up front and Grealish, who is good enough to fill two positions at the same time, is also up front.

That is the brief, right. Go with the Dream Team. Do not mess around with worker-drones such as Mason Mount and Kalvin Phillips, much less Harry Maguire and John Stones. Throw caution to the wind, take the shackles off and let the talent shine. Let the best generation of players we have had since 1966 run free with the wind in their hair so they can bring that World Cup back. And nothing else will do. 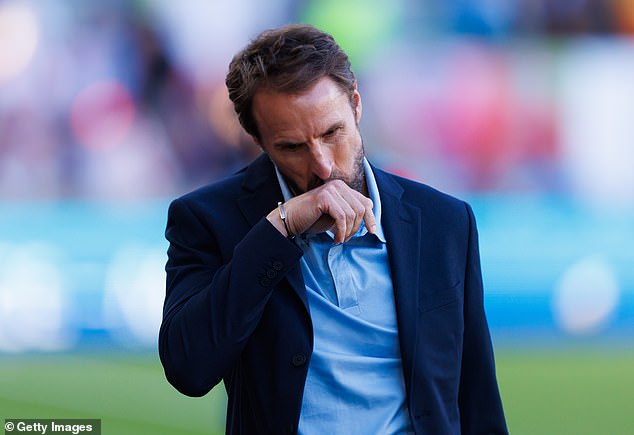 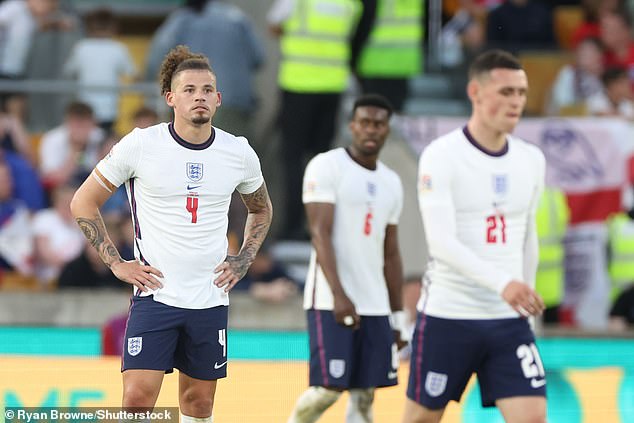 The Three Lions failed to win any of their four Nations League games, resulting in criticism

That is what the Southgate Out mob wants. Load the team with every bit of attacking talent England has at its disposal because this is the age of icons and individualism and image. And everything else is boring and dull and cautious and not what a brave manager would do.

That is what the mob that turned on Southgate at Molineux wants. Its disdain for his predilection for playing two holding midfielders in front of England’s back line and what it sees as his stultifying trophy-costing caution will brook no dissent. The shame is that its predictions of failure at the World Cup this winter may be about to become a self-fulfilling prophecy. 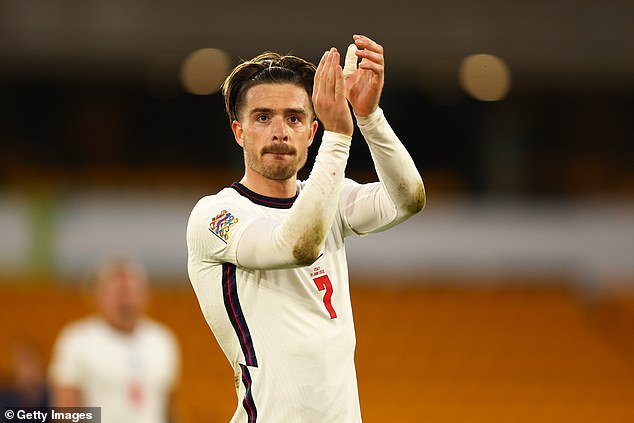 There has been frustration over Jack Grealish’s game time, with fans wanting entertainment

The Southgate Out mob believe it was only the caution of the manager that cost England successive triumphs at the World Cup and the European Championship because, apparently, despite having a side with only one, maybe two, acknowledged world-class talents, England would otherwise have waltzed to victory in both tournaments.

And they believe that only victory in Qatar will do justice to the crop of players Southgate has at his disposal. As a colleague of mine wrote earlier this week, ‘the brief but refreshing Age of Humility is over. Win a World Cup or else.’ And with the end of that humility, unfortunately, comes the return of the kind of pressure and heightened expectation that made England football an object of derision for so long.

The danger is that the ugly reaction to defeat by Hungary broke a spell. One of Southgates’s greatest feats has been to make playing for England fun again, to make joining up with England something the players looked forward to, not the ordeal by public and media humiliation that many among a previous generation dreaded. If they go to the World Cup with the fans on their back, it will not end well.

Kieron Dyer was part of that previous generation and he knows what is coming. ‘When England got to the World Cup semis in 2018, they had gone into that tournament with no expectations on them,’ he says. ‘The fans were behind them from day one. They could play without fear. 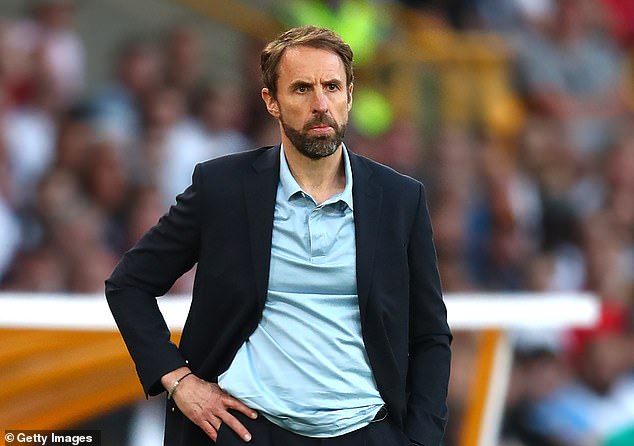 If England head into the World Cup with supporters on their back, it will not end well for them

‘They have been freed of that fear a bit because Gareth was brilliant in getting the media on side and the public on side and taking a lot of pressure off the players. But the fans have turned on Southgate now and when the pressure comes, that’s when the fear comes and we have all seen what that can do to England teams.

‘Everyone talks about Southgate wasting all our attacking flair and that he’s too defensive-minded. But if you look at our team — I am not trying to belittle anyone — where we are weakest is at the back. We do have to have a Declan Rice and a Kalvin Phillips protecting the back four.

‘The best teams can defend up until the halfway line because they can deal with pace and they are not afraid of being left one v one. I don’t think our centre halves can be left one v one. Harry Maguire has had the worst season he’s had for a while and been under a lot of pressure. Would John Stones be in City’s starting 11 if everyone’s fit? I’m not sure. We’re still one of the teams who have a chance of winning but do I think we’ll win it? I don’t.’ 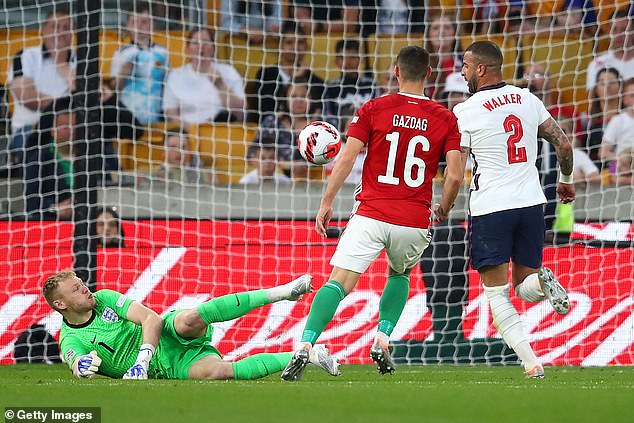 Despite the chastening results, the Three Lions’ chances are greater with Southgate in charge

If the reaction to the Hungary defeat is anything to go by, we can expect in the coming months to see teams like Argentina, Brazil and France denigrated and patronised as teams England would be dispatching comfortably in Qatar were it not for the caution of the manager.

It may come as a rude shock to some that the two South American giants in particular are in rather good form, have a few decent players and may wish to quibble with their allotted role as potential fall-guys for England if only England were to be liberated from the dead hand of Southgate.

The reality, of course, is that England have a far better chance of winning the tournament with Southgate at the helm than without him. And the reality is that the vilification of the manager and the poison it spreads will do far more to hurt England’s chances in Qatar this winter than starting Grealish on the bench.

Rory McIlroy has always been celebrated as a fascinating interviewee and an ambassador for his sport but in the last few weeks he has stepped up to become golf’s most valuable asset and its brightest statesman.

His clear, honest, unflinching views on the bankruptcy of the LIV golf tour have articulated the depths of feeling against the Saudi-backed breakaway series and the reasons why the game’s great players should shun it.

It appears, too, that the act of leading the PGA Tour’s opposition and anger towards Greg Norman’s band of mercenaries has inspired McIlroy’s game.

He took plenty of momentum from his stunning final round at the Masters in April into this summer but it is as if he has been emboldened and motivated by championing a sport he loves. 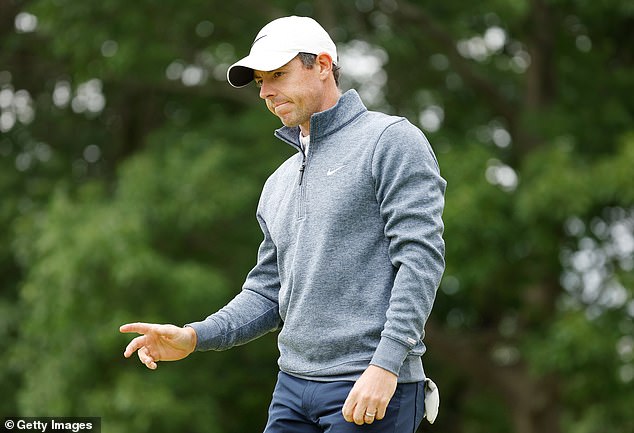 MAGICAL CURRY ONE OF THE BEST

Once you have watched an NBA game live, you never side with the couch detractors who say they cannot fall in love with basketball because it is just too easy.

Up close, the players are incredible athletes who have a beautiful talent for sometimes making something impossibly difficult look routine.

I have seen Michael Jordan play and LeBron James and even though I am not saying he is a better player, neither was quite as mesmerising as Steph Curry.

Curry’s grace and poise and quicksilver dribbling, with meticulous control and his three-point shooting, are a privilege to watch and all of his qualities were there last week, when his Golden State Warriors beat Boston Celtics to win their fourth NBA title in eight years. Curry was named the finals MVP for the first time.

Maybe he is not as acclaimed as Jordan or James but he deserves a place as one of sport’s modern greats. 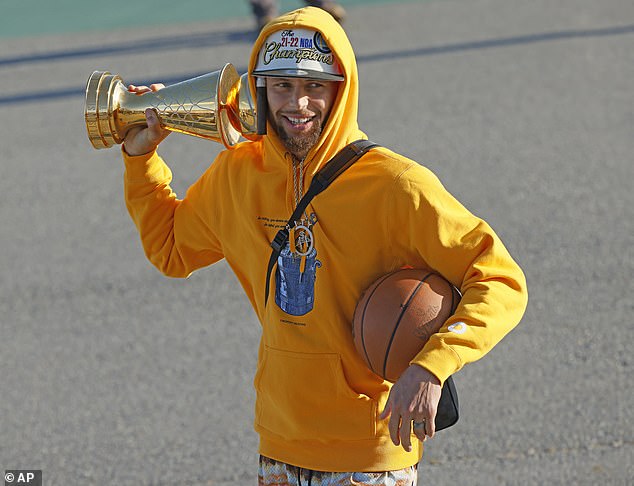