A 6-2 first-leg victory at Old Trafford meant United already had one foot in the Gdansk final ahead of the trip to Italy, where Roma made things uncomfortable and won an entertaining semi-final second leg 3-2.

Solskjaer admitted he was disappointed with an erratic second-half display during which his team conceded three times.

But he piled praise on Cavani – who followed his first-leg double with another two goals in Rome – as well as De Gea, whose position has this season come under increasing scrutiny with Dean Henderson’s emergence. 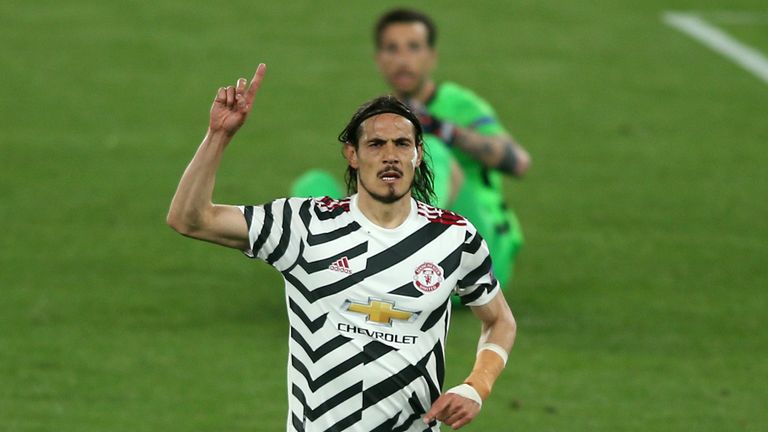 “The reason we’re here is because we’ve got a centre-forward who has scored four goals during the tie,” Solskjaer said of the Uruguayan forward whose contract runs out in the summer.

“Edinson has shown again why we want to keep him at Old Trafford.

“Football has its own language. Edinson has proven tonight, in previous games and throughout his career what a centre-forward should be doing both on and off the ball, both preparing for games and recovering from games.

“He’s an absolute top professional and everyone in my team can learn from him.”

De Gea ‘man of the match’ – but has he earned final spot? De Gea was another standout performer at the Stadio Olimpico, producing fine early saves and then some outstanding stops as United wobbled following quickfire Edin Dzeko and Bryan Cristante efforts.

“We kept losing the ball in difficult positions but luckily we have got one of the best goalkeepers in the world,” Solskjaer added to BT Sport.

Asked if De Gea had secured his place in goal for the final, Solskjaer said in his press conference: “David was vital and was man of the match for me. He was the stand-out performer.

“The final is still three weeks away and we’ve got many games still to play.

“David has put a very good application in of course with his performance.

“The proof is always on the pitch. You’ve got to perform, and you keep your place in the team when you play well.”

Having fallen at the semi-final stage on four occasions across the last two seasons, United made it fifth time lucky to set-up a shot at glory against Villarreal in Poland on May 26.

“We played one very good half at Old Trafford, which brought us through. I never like to lose a game, especially the way we did it but it was always going to be one of these games that was going to be open, with chances for both teams.

“The second half was disappointing, very poor, but we’re in the final and we’re looking forward to May 26. It’s a one-off. Anything can happen but we’ll prepare well.”

Asked in his press conference if he felt securing a place in the final was vindication of his work at Old Trafford after previous questions over his credentials, Solskjaer said: “When you get to a final, even after you’ve been praised or criticised, it doesn’t really matter.

“When you’re in a final, you’ve got a chance to win the competition you’re in.

“It’s got nothing to do with me personally, I’m just happy for the boys that they’ve got something to look forward to at the end of the season.” 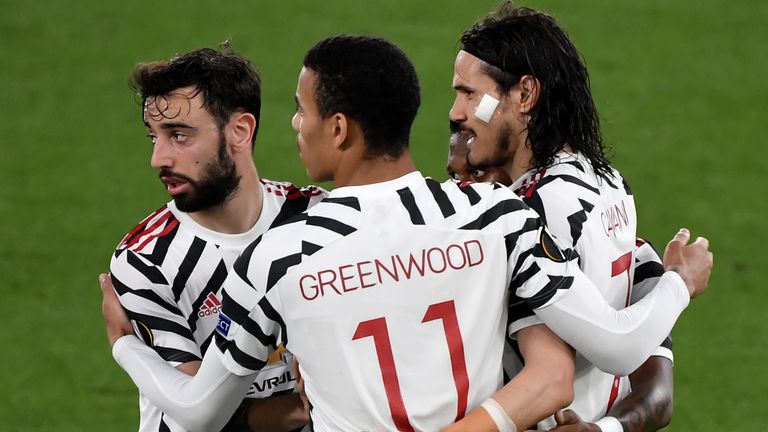 After four semi-final defeats in four previous attempts as Manchester United manager, Ole Gunnar Solskjaer is finally into a final and despite a brief second-half scare against Roma in the Stadio Olimpico nobody could dare deny that this was deserved over the two legs.

The United boss was taking no chances either, naming a surprisingly strong team in Rome that included Bruno Fernandes and Paul Pogba despite going in with a four-goal lead.

Why not, though? United’s Premier League position looks secure with rotation required anyway in the coming days given that congested fixture list. The Europa League is the priority now, offering the silverware that would signpost this team’s evident improvement.

David de Gea was busy in the Eternal City but United showed their quality in the final third. There is talk that Anthony Martial could yet return before the end of the season but it would only be the bench for him in Gdansk regardless given Cavani’s supreme form.

Fernandes was even better, his creativity remarkable. The Portuguese has transformed this club over the past 16 months but now he wants a trophy to show for it too. On this form, Solskjaer’s United should be considered warm favourites to deliver it against Villarreal.

Roma return to Serie A action on Sunday at home to Crotone.

When and where is the Europa League final?

The Europa League final takes place on Wednesday, May 26 at the Gdansk Arena in Poland. The stadium was due to host the 2020 final, but after the tournament was delayed due to Covid-19, the showpiece took place in Cologne, Germany as Sevilla beat Inter 3-2.