Home » Soccer » Nuno Espirto Santo on Wolves' evolution, dealing with the coronavirus pandemic and the fight against racism

For two years, a glance at a Wolves team-sheet rarely told you much you didn’t know. Three at the back, Conor Coady martialling the defence, Jonny and Matt Doherty out wide, Ruben Neves and Joao Moutinho in midfield, Raul Jimenez scoring the goals. Consistency in style, and in selection.

Inside the mind of head coach Nuno Espirito Santo was a question. What next? The secret to consistent success has always been, rather ironically, change. Sir Alex Ferguson once said: “Although I was always trying to disprove it, I believe that the cycle of a successful team lasts maybe four years, and then some change is needed.”

This season, we have seen what comes next, partly born out of design. Wolves have experimented with a four-man backline for the first time in Nuno’s three-year tenure. The rest has come from necessity, learning how to live without talisman and top goalscorer Jimenez following a long-term injury suffered in November.

“It is a mistake to try to reproduce what you had before,” Nuno tells Sky Sports in a sit-down interview ahead of facing Liverpool on Monday Night Football, an opposition going through their own season of transition – and certainly not one they would say was of their own making.

“You have to find a new way. We’ve been fortunate to come up from the Championship and straight away start competing in the Premier League with seven players in the starting 11 who were already familiar with our ideas. Then the next season again, we competed in the Europa League.

“There were players that were playing every few days, over and over again. So that creates besides strong bonds among players, creates routines, creates knowledge, creates communication that in a normal period will take a lot of time. And when you don’t have what you had before, you miss it. But you have to find a new way because things are different.”

That Jimenez-shaped hole has played a large part in things being different. Before the striker suffered an accidental but horrific fractured skill against Arsenal, Nuno’s side were enjoying their best start to a top-flight season since 1980. But from then on, they have suffered.

His absence has taken the shine off of what had otherwise looked a promising start for the club’s “new way”. Six Wolves players have featured in the Premier League before their 21st birthday this season. Diogo Jota and Matt Doherty have moved on, Nelson Semedo has arrived from Barcelona and Daniel Podence, when fit, has impressed in attack.

But 17 goals in 18 games since Jimenez’s injury have unsurprisingly slowed up their points tally, which would have dropped Wolves just two points above the relegation zone if it had stretched across the whole season.

One thing Nuno does not want is sympathy. Jimenez is arguably the toughest player to replace in Wolves’ line-up. Nuno is quick to shoot down any excuse for what, privately, he may consider to be a season below expectations, in an era where no team has escaped the challenges of Covid-19, and on Monday his side will come up against a team missing their own talisman in Virgil van Dijk. 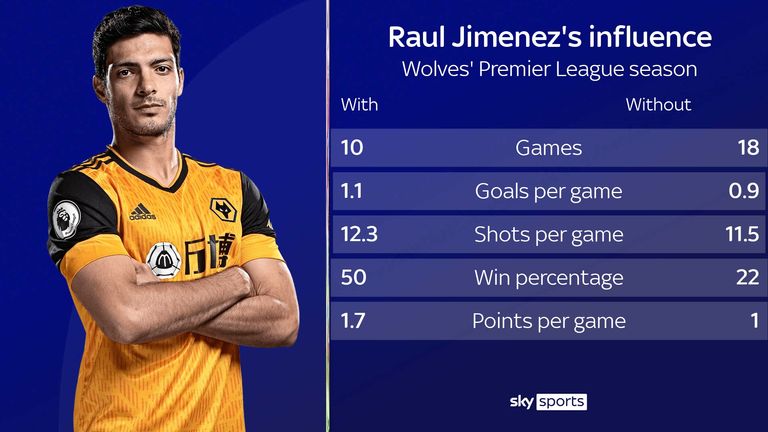 In fact, he would rather focus on the positives.

“It’s something that all the teams, the managers and the technical staff are facing,” he says. “And this particular season, there have been so many challenges we have faced, since the beginning. Planning has been very difficult, because it’s constantly changing in all the aspects of the protocols. For sure, it will make us better and more prepared.

“To go through tough moments, you realise that you have to find new themes, new solutions, which makes you work harder and makes you more focused and relentless in the pursuit of those goals.

“But in the end they will make you better. Myself, I feel that this tough period made me realise things that maybe sometimes I ignore. So I believe that I can become a better person and a better manager.”

In some ways, it may have been easier to hold on to Jota and Doherty for another year, and keep doing what Wolves have been doing since 2018. After all, Nuno had set them up to become one of the most predictable but, crucially, effective sides in the Premier League.

Even with a desire to freshen things up, he has not always found it easy to blend that evolution with the best bits of his side’s existing identity.

His short-term strategies feeding into long-term thinking are the preserve of any successful manager, and for Nuno also a measure of his wider personality.

In what has been a year like no other, taking a knee has provided a beacon for change for many in football and beyond. But some figures, and clubs, have decided it has run its course. Some say it has stopped having an impact, and is no longer fuelling change.

Rightly or wrongly, but typical of his holistic thinking, Nuno does not see it that way. And the only Black manager in the Premier League is in no mood to give up.

He said: “It will take a lot of time, possibly more than one generation. So I truly believe that is important that we keep pushing and showing that we need to change.

“Any kind of racism, all these situations, this is not only for Black people, Black or Asian or minorities, it is for everybody to realise that we need to try to eradicate racism.

“Taking a knee is just one of many, many things that we should do. It’s a public situation. But there are many situations that are not so public and when you face something, and you feel it that is racist, we should speak, show our opinion. Even it is in a private way. This is the better way to change things in the future.

“I see changes, I see people more concerned about it. Young people really showing that there is no difference between us. And I will continue. I’ll continue as long as I believe and I feel it I will do so.”