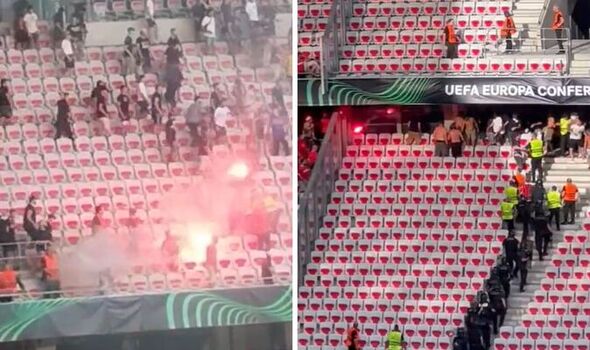 Nice’s Europa League Conference clash with FC Koln has been delayed due to violence in the stands between the two sets of supporters. The match was scheduled to kick-off at 5.45pm BST, but violent clashes in the stands soon indicated that wouldn’t be the case.

The players hadn’t even come out to warm-up with both teams seemingly waiting for the unrest in the stands to calm down. Rival fans were seen chucking flares at each other as security and police tried to get a hold of the situation.

Koln confirmed on social media that the same had been delayed with talks taking place with UEFA. They tweeted: “Unfortunately the game between ourselves and Nice has been delayed due to violent clashes between the fan groups in the stadium and on the stands.

“We are currently discussing the background, a UEFA security meeting is taking place. [FC Koln] condems every form of violence in the strongest possible terms. 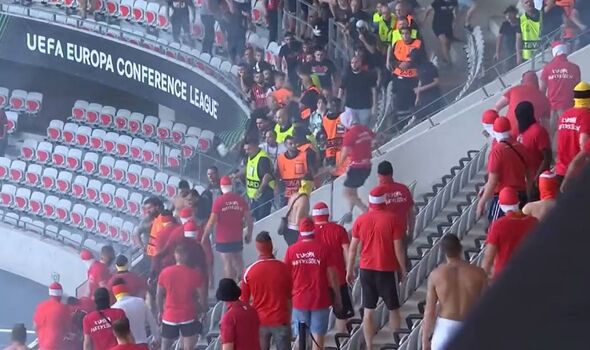 “We stand for a sporting, fair and respectful behaviour with one another. We apologise to all the peaceful fans who had made it a football festival up until this point.”

Koln captain Jonas Hector eventually came out to address his club’s fans, taking a microphone as he pleaded for peace to allow the game to go ahead. “We can’t wait to play this game with you. We all want the game to take place,” he said.

“But we have to also say that what happened is not good. We don’t want to see that. We did everything to make this possible last season.

“We want to continue the journey with you. So please: stay calm, support us as best you can. That is what the club wants. Stick together, to play football and celebrate the game peacefully instead of violence. Thank you.”

It was later confirmed that the game was being planned to get going at 6.40pm BST. But any further disturbances in the crowd would see the game abandoned.