Newcastle vs West Ham LIVE: David Moyes’ Hammers look to strengthen their bid for Champions League football next season as they make the trip north to face Steve Bruce’s relegation-threatened Magpies side

The Hammers are currently fourth in the table and are chasing Champions League football for next season. Meanwhile, at the opposite end of the table, Newcastle in a fight for survival and are just six points clear of the drop.

Follow Sportsmail’s Adam Shergold for all the live coverage of this 12:30pm kick-off, including all the build-up to the game in the North East.

Newcastle’s Callum Wilson has scored more Premier League goals against West Ham than he has vs any other side in the competition, netting eight goals in nine appearances against the Hammers.

Jarrod Bowen has scored in each of his last three Premier League games for West Ham – he last scored in four consecutive league games in November 2019, in the Championship with Hull City. No West Ham player has been involved in more league goals than Bowen this season (12 – 8 goals, 4 assists).

Newcastle’s Allan Saint-Maximin has been involved in five goals in his last six Premier League appearances (2 goals, 3 assists), as many as in his previous 19 in the competition. The Frenchman has exactly the same tally of goals (3) and assists (4) in 18 games this season as he got in 26 appearances last season.

With eight goals in just nine Premier League games at West Ham this season, Jesse Lingard has equalled his best goal tally in a single top-flight campaign (also 8 in 33 apps in 2017-18)

West Ham may well be able to call themselves a Champions League club next season, but they already appear to have become the Premier League’s brand-new great entertainers.

The outlook appeared bleak very early on in the season, with many backing the Hammers for the drop and boss David Moyes for the sack following a defeat by Newcastle on the opening day.

But the Scot has sparked a remarkable rejuvenation tactically and been the driving force behind a resurgence in his players’ confidence, which has seen them rise up the table and sit in the top four with just seven games of the season remaining.

Newcastle’s win against Burnley last time out ended a run of seven Premier League games without a victory (D4 L3). The Magpies are looking to secure back-to-back league wins for only the second time this season (also in December).

West Ham have scored three goals in each of their last three Premier League games – they last scored 3+ goals in four top-flight games in a row back in August/September 1928.

West Ham have gone 3-0 ahead in each of their last three Premier League games – in the competition’s history, only Manchester United have scored the first three goals in four consecutive matches before, doing so twice in February 2010 and September 2011. 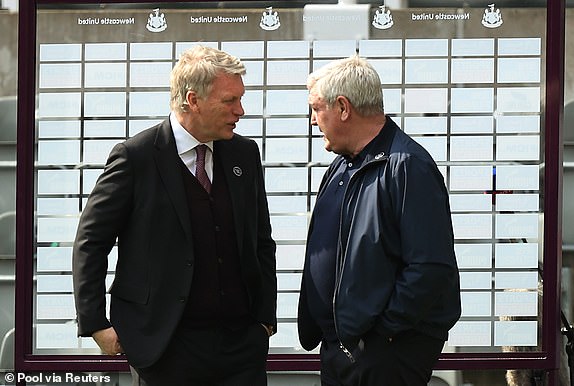 Newcastle boss Steve Bruce has saluted old foe David Moyes for the way he has bounced back from his Manchester United misery.

Moyes landed the dream job in 2013 when he was appointed as Sir Alex Ferguson’s successor at Old Trafford.

But he lasted less than a year in the post as reigning champions United slumped to their only finish outside the top six in the Premier League era.

We should be able to confirm the two team line-ups in just a couple of minutes. 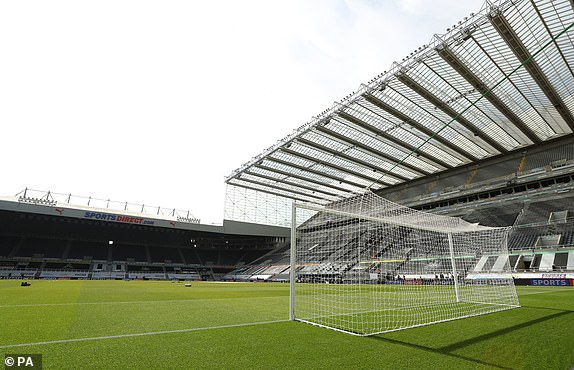 It is, of course, an abridged Premier League schedule this weekend with the two FA Cup semi-finals today and tomorrow.

Not too many games this weekend will carry as much significance as the one that kicks off the Premier League programme this lunchtime.

It sees Newcastle United, desperately trying to scramble away from the relegation zone and what would be a disastrous demotion to the Championship, take on a West Ham side who are dreaming of Champions League football.

The Magpies do have a six-point cushion on Fulham either side of the drop line – and they do retain a game in hand – but they won’t breathe easy until they’re mathematically safe amid another season of turbulence.

The Hammers are pole apart from them at the moment. Fourth in the table and leading a pack of teams who want to be in Europe’s elite competition next season.

Who will take the points today? Welcome along to our live coverage of the 12.30pm kick-off at St James’ Park. 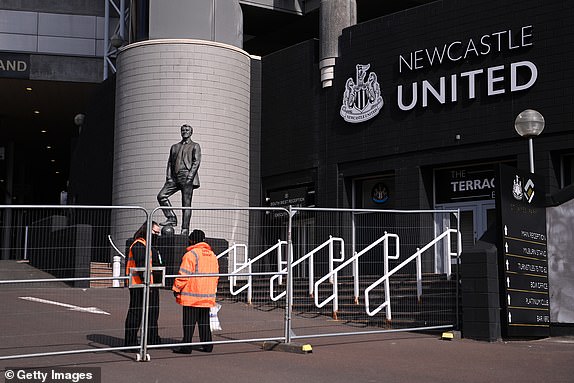