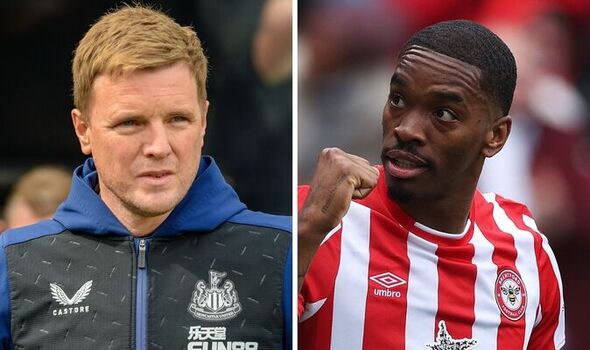 Newcastle are reportedly keen to bring in two strikers this summer despite signing Chris Wood in January, but they are supposedly switching their plans away from Benfica starlet Darwin Nunez. Ever since Newcastle’s Saudi-backed takeover, fans have been speculating on who the club will look to sign in the transfer market.

The January window was a sign of things to come with Newcastle spending a huge £25million on Wood from relegation rivals Burnley. Kieran Trippier and Dan Burn were signed to help bolster their defensive options and provide some much needed experience.

But the star signing of the window was undoubtedly Bruno Guimaraes, with Newcastle beating several other European clubs to his signature. Around £90m was spent on all four players and even more money will be available for Eddie Howe to use on improving his squad this summer.

While Newcastle were happy to pay the £25m price to sign Wood in January, it appears as though the club still want to overhaul their frontline. Newcastle’s intent heading into the summer window has been made clear with some reports linking them with a move for the in-demand Nunez.

JUST IN: Hazard’s brother speaks out on future amid Chelsea and Arsenal links

The Benfica forward is attracting attention all over Europe and is expected to be sold this summer. However, the Telegraph claim that Newcastle are losing confidence that they will convince Nunez of a move to St James’ Park.

Instead, Newcastle are switching their attention to Brentford’s Ivan Toney – a player sold by Rafael Benitez back in 2018. The 26-year-old has proven the Spaniard wrong ever since with the striker now a proven Premier League striker with Brentford.

Despite the prospect of Toney joining both Wood and Callum Wilson at Newcastle, the Magpies are also set to try again in signing Hugo Ekitike as well. A deal was agreed with Reims on deadline day for the young French forward to move to Newcastle, but he was reluctant to leave so soon after breaking into the first team.

The initial agreement was said to be around £12m and Newcastle would likely be hoping for a similar fee this summer. Signing Toney would prove more costly with Brentford supposedly wanting around £30m for the striker.

Newcastle’s move away from signing Nunez is said to be based on the club’s belief that the Uruguayan wants to be playing European football next season. The Magpies may currently be lingering toward the bottom of the table, but the club’s new board have made clear their lofty ambitions of climbing up the league to fight for European places in the near future.