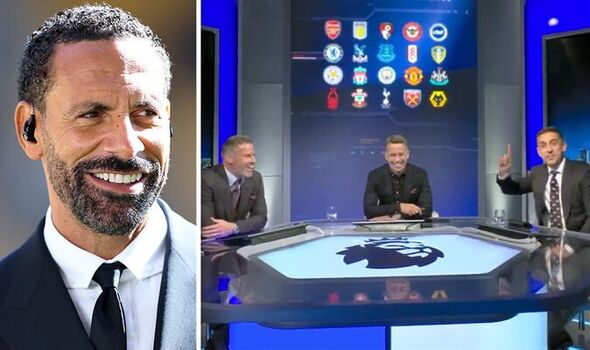 Gary Neville has joked he wants to join an apparent WhatsApp group including Rio Ferdinand and other former Manchester United players. The former England right-back made the quip live on Sky Sports on Monday night after his colleague Jamie Carragher had been embroiled in an online spat with Ferdinand.

Carragher and Ferdinand came to blows on Twitter in a debate regarding United superstar Cristiano Ronaldo. Carragher tweeted earlier in the day on Monday that Erik ten Hag was right not to pick the Portugal forward against Manchester City on Sunday.

The Liverpool legend posted: “The idea that ETH got it wrong yesterday by not playing Ronaldo is laughable! Ronaldo played at Brentford when it was 4-0 at ht!!

“It’s not a dig at CR, but [Marcus] Rashford’s pace on the counter attack as we saw v Arsenal/Liverpool was the best option.”

His ex-Three Lions team-mate Ferdinand responded by joking about the viral video clip where Ronaldo snubbed Carragher’s handshake at the match between United and Liverpool earlier this season. Ferdinand believes Ronaldo should have played a part against City.

He wrote: “Carra you still upset he didn’t shake ur hand at Old Trafford? The hardest thing to do in football is score goals…”

Carragher then brought up an apparent WhatsApp group which he reckons includes Ferdinand, Ronaldo and the likes of Patrice Evra. He replied: “No I’m delighted it went viral!

“Rio I know how it works, he’s your mate & you/Evra & the rest are on the group WhatsApp & he asks you to come out & defend him, don’t be his fan boy you’re Rio Ferdinand FFS!!”

Ferdinand refuted claims there was such a group. The pundit claimed Carragher gets bullied in the punditry studio when alongside the likes of Roy Keane. 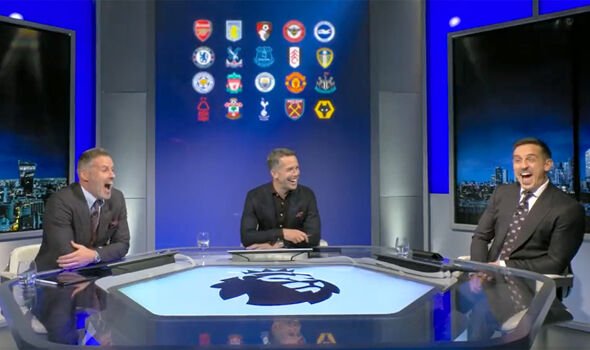 Ferdinand wrote: “What WhatsApp group?! Leave off lad…I want this same energy with Roy Keane when ya next in the studio ffs, stop getting bullied.”

That was where the Twitter spat ended. However, it continued on Sky Sports’ Monday Night Football.

Closing the show, Carragher revealed Keane would be on the programme next week. He said: “Have we got Roy Keane on? Another Ronaldo debate.”

Neville then referred to Ferdinand’s earlier comment before addressing his former team-mate. He said: “You’ll get bullied again! Watching Rio?”

WIN A FREE ENGLAND SHIRT FOR THE WORLD CUP!

Carragher responded: “He wants to get in that WhatsApp group Rio.”

To which Neville joked: “Yeah can I be in that WhatsApp group mate please?”

Ferdinand simply replied with a number of crying with laughter emojis on Twitter, tagging both Neville and Carragher in the tweet.