Home » Soccer » ‘Never seen anything like it’: Chaos as referee blows final whistle twice before full-time at Cup of Nations

A referee has sparked controversy at the Africa Cup of Nations after he twice blew the final whistle before the 90 minutes were completed in a match between Tunisia and Mali.

The game descended into chaos when Janny Sikazwe prematurely called time on two occasions before later failing in an attempt to restart play more than 20 minutes after players had left the pitch.

The Zambian official, once suspended as part of a corruption investigation, initially blew for the end of the game with only 85 minutes on the clock, before correcting himself.

He then brought the game to an end in the 90th minute despite a series of stoppages in the second half, including a controversial VAR review and a drinks break.

With Mali leading 1-0, the Tunisia bench reacted furiously when the final whistle sounded. Many of the coaches ran onto the pitch to confront the referee, pointing angrily at their watches and demanding stoppage time be played.

Television footage showed 89 minutes and 45 seconds on the clock when the full-time whistle was definitively blown. Sikazwe, who refereed at the World Cup in Russia in 2018, had to be escorted from the pitch by a team of security guards. 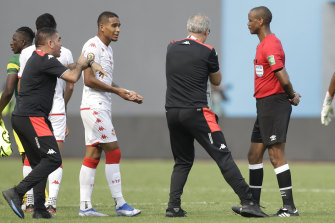 Tournament organisers are reported to have ordered the teams to re-enter the pitch and play the match to a conclusion, more than 20 minutes later, but Mali were declared the winners after Tunisia did not return to the field.

“The players were taking ice baths for 35 minutes before they were called back out again,” Tunisia coach Mondher Kebaier said.

“I’ve been coaching for a long time and have never seen anything like it. Even the fourth official was preparing to lift the board [to show the number of minutes of added time] and then the whistle was blown.”

Mali manager Mohamed Magassouba was in the middle of his post-match press conference when he was told his players needed to return to the pitch to play the remaining three minutes of additional time.

“Unfortunately the opposition team did not want to come back out and the final whistle was blown,” he said.

Even before the controversy at the end, the match was packed with incident.

Mali took the lead when Ibrahima Kone scored from the penalty spot after Boubacar Kiki Kouyate’s shot had struck the hand of Tunisia midfielder Ellyes Skhiri.

Tunisia’s Wahbi Khazri then missed with a penalty of his own before Mali were reduced to 10 men when Sikazwe showed a harsh red card to El Bilal Toure for a late challenge.

Sikazwe was asked to check the pitchside monitor following a VAR review, but stuck with his decision. Tunisia are understood to have filed a complaint with the Confederation of African Football following the match.

Seemingly no stranger to controversy, Sikazwe was provisionally suspended by CAF in November 2018 following corruption allegations. The suspension was later lifted after CAF’s disciplinary board ruled in January 2019 that there was insufficient evidence to indicate his involvement.

There was further embarrassment on Wednesday as the wrong national anthem was played twice for Mauritania before their opening game against Gambia, which they went on to lose 1-0. Some players were seen shaking their heads as two unsuccessful attempts were made to play the correct anthem before kick-off.