Naples: Fans streamed to Napoli stadium on Thursday to pay their respects to Diego Armando Maradona, grieving a man who achieved god-like status in the Italian city where he played some of his most sublime football.

The diminutive Argentine left Naples almost 30 years ago, but his spirit never departed, with a giant mural of him still staring down on the traffic-clogged streets and his photograph placed alongside images of saints in shop windows. 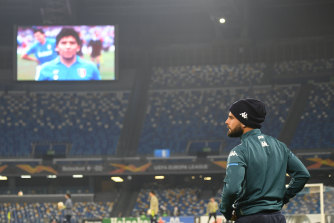 Napoli’s Lorenzo Insigne looks on as a picture of Maradona is beamed to an empty Stadio San Paolo before the Europa League clash with HNK Rijeka.Credit:Getty

News of Maradona's death on Wednesday drew thousands of stunned Neapolitans into the evening streets in defiance of a coronavirus lockdown, and the grief showed no sign of abating as day broke.

"Yesterday the entire city of Naples died, together with Argentina," said Lorenzo Rubino, 26, who wasn't even born when Maradona played for Napoli. "I hadn't cried since my mother's death two years ago."

Maradona came to Naples, a city suffused with sun and superstition, in 1984 when he was 23 for a then world-record $7.5 million contract. Over the next seven years, he helped perennial underdogs Napoli to their only two Serie A titles and their sole major European trophy.

Six years later, when Maradona's Argentina met Italy in Naples at the 1990 World Cup, some of the home fans did the unthinkable and cheered for the South Americans. 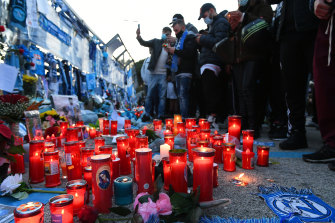 Fans gather outside the Stadio San Paolo, which some have already suggested be renamed in Maradona’s honour.Credit:Getty

When he was flown in by helicopter for his official presentation, 75,000 people packed into the stadium to see him. Thereafter, match-day was the highlight of many peoples' lives.

"Dad did not come to the hospital when I was born because he stayed at the stadium until the end of the game to watch Diego play," said Teresa De Lucia.

City mayor Luigi De Magistris has called for the city stadium to be renamed in honour of Maradona.

"He loved Naples and through football he wanted to let the world know what Naples is, a city full of humanity, full of heart, energy and imagination. A volcano for better or for worse," the mayor told RTL radio. 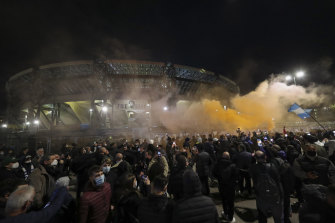 In other Europa League matches Friday (AEDT), forward Nicolas Pepe put himself back in manager Mikel Arteta's good books with the opening goal in a 3-0 win at Molde to all but assure his side's place in the knockout stages.

The Ivory Coast international, sent off for a headbutt on Leeds United's Ezgjan Alioski and criticised by Arteta last weekend, produced a fine finish in the 50th minute, shortly after striking the crossbar with a superb curling effort.

Arsenal, disappointing in a drab first half against the Norwegian side they beat 4-1 at home, doubled their lead five minutes later when Reiss Nelson converted a precise low cross.

Substitute Folarin Balogun, 19, made it 3-0 to the visitors with his first goal for the club, moments after coming on to silence the few home fans that were allowed inside the stadium.

Elsewhere, Italian powerhouses AC Milan were held to a 1-1 draw at Lille while Sparta Prague thrashed Celtic 4-1 after conceding an early goal at home.