Reports suggesting Arsenal are not in talks with Mykhaylo Mudryk have been rubbished amid fresh claims the Gunners are in fact locked in negotiations with Shakhtar Donetsk over a deal for their Ukrainian starlet before Thursday’s transfer deadline. Varying reports regarding Mudryk’s potential move to the Emirates have emerged in recent days, however, the latest information coming out of Italy suggests the north Londoners are seeking to conclude a deal with Edu offering lucrative bonuses.

Mikel Arteta has made no secret of his desire to add another winger to his ranks this summer having missed out on former Leeds attacker Raphinha to Barcelona earlier in the window. Arsenal’s attention is thought to have since turned to rising Shakhtar star Mudryk in recent days, though mixed updates have been reported regarding the 21-year-old.

Some sources claimed the Gunners had entered talks with Shakhtar over the winger, while others dismissed such suggestions, insisting Arsenal have expressed an interest but have not acted on such admiration for the player. However, those rumours have now been rubbished with reports in Italy claiming talks are very much on.

According to Calciomercato, the north Londoners remain in negotiations with Shakhtar over Mudryk, who is thought to be pushing to join Arteta’s ranks. The Italian outlet reiterated their belief that Arsenal are discussing the prospect of a deal in the region of £21.6million plus add-ons with the Ukrainian outfit for the attacker.

JUST IN: ‘Disgrace’ Pulisic enrages Chelsea fans as he storms down tunnel 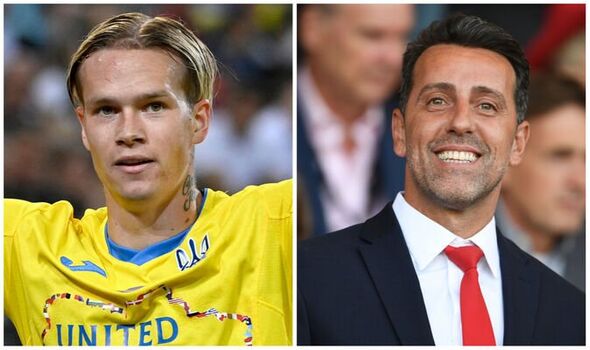 That figure is understood to be the focus of negotiations at present with Shakhtar thought to be holding out for a high fee and unwilling to offer the Premier League’s early pacesetters a discount. Amid suggestions from elsewhere that the Ukrainian side have named their price at £30m for Mudryk, Arsenal chief Edu is thought to have offered to include a number of tantalising bonuses within the structure of a potential agreement.

It remains to be seen whether a deal can be struck between the two parties as the clock ticks ever closer to Thursday’s 11pm transfer deadline. The Gunners are also understood to face competition for Mudryk’s services. 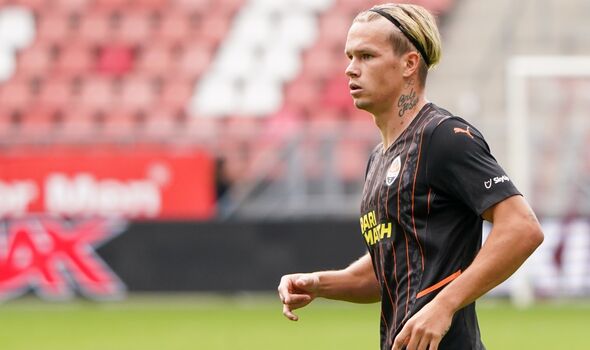 According to The Guardian, Brentford are willing to smash their transfer record by meeting Shakhtar’s £30m demands for Ukraine’s newest star. The Bees are thought to have seen efforts to sign the winger back in January rebuffed.

Mudryk, whose style has been likened to Brazil and Paris Saint-Germain superstar Neymar, enjoyed a breakthrough campaign with Shakhtar last term, netting two goals and registering nine assists in just 19 appearances. The exciting attacker made his international debut in Ukraine’s World Cup semi-final play-off success over Scotland back in June and has since gone on to earn four more caps for his country.