‘We are not as ready as Sterling as he was resting for a week’: Jose Mourinho aims a fresh dig at Manchester City after their star attacker dropped out the England team to play Iceland… but the forward is only a sub for Pep Guardiola after injury scare

Jose Mourinho wheeled out his customary mind games before Tottenham Hotspur’s crunch match against Manchester City, questioning whether Raheem Sterling had really been injured over the international break.

The winger was named on the bench by Pep Guardiola for the game in north London after he was called up for England’s three latest games, but did not feature against the Republic or Ireland or Belgium, before returning to his club due to a calf complaint before the comfortable Nations League win over Iceland and training with Man City on Friday.

‘We are not as ready as Sterling because he was resting the whole week,’ Mourinho jibed. ‘But we are fine, we are ready for the game.’ 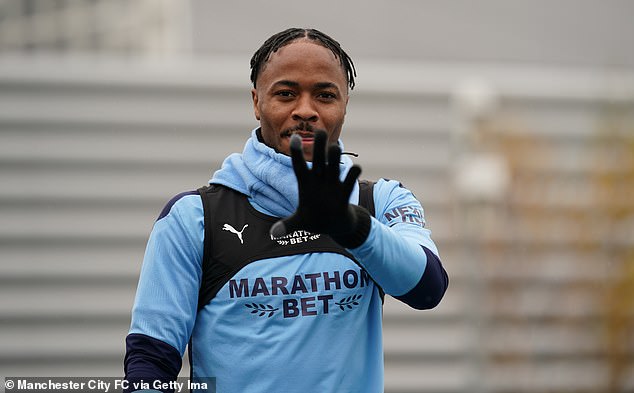 Guardiola responded: ‘He’s trained one day [for us] in the last week, but he’s not perfect.’

The dig came after the Portuguese said in Friday’s pre-match press conference that Man City’s dishonesty was in stark contrast to his own club, with Mourinho citing Eric Dier’s absence for Spurs after withdrawing from England duty as evidence that his team could be trusted.

‘We all know Sterling is going to play (against Spurs),’ said Mourinho. ‘When Eric Dier left the national team injured last month, he didn’t play two matches for Tottenham. He needed a couple of weeks to recover. And Raheem is going to play.’

Guardiola was exasperated, replying: ‘Mourinho has to speak to the doctor for the national team of England and the doctor for Manchester City,’ he said. ‘Except maybe Mourinho is a doctor, I don’t know.’

After Gareth Southgate had said that clubs were exerting pressure on their star players not to join up with England, Mourinho demanded in the same press conference that the national team boss reveal who the main culprits were.