Home » Soccer » ‘More than held our own’: Socceroos are no flat-track bullies, says Jeggo

Midfielder James Jeggo insists the Socceroos are not flat-track bullies, saying the only thing missing from their performances against Japan and Saudi Arabia were the goals he felt their play deserved.

Australia spent the first part of their World Cup qualifying campaign beating up on lower-ranked Asian teams, stringing together a world-record 11-match winning streak along the way. 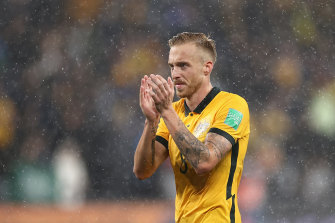 James Jeggo made a rare start for the Socceroos against Saudi Arabia.Credit:Getty

But over the past two international windows, Graham Arnold’s men have been found wanting against the two teams that were always likely to present the toughest challenge on the road to Qatar 2022.

Thursday night’s scoreless draw against Saudi Arabia – coming after a 2-1 defeat to Japan in Saitama last month – has left them in a precarious position in Group B. They now sit in second position, only one point clear of the Samurai Blue, who have clawed back into contention for direct World Cup qualification after an earlier slip-up against Oman.

While their destiny remains firmly in their own hands, the Socceroos no longer have any margin for error as they enter the back end of the qualifying process – a string of five games that starts early on Wednesday morning (AEDT) against China, and ends in March with a home clash with Japan and then an away trip to face the Saudis.

“It is tight, but it’s the last phase of qualifying for a World Cup,” Jeggo said.

“There’s a lot of good teams, it’s very competitive. It’s always been like that in Asia. We always knew it was going to be tight and tough, but our big focus is what’s in front of us and the next game – and that’s been the mantra all throughout this qualifying campaign.

“We know what’s at stake. Every time we come into camp, the big focus is not to get too caught up in the big picture or what’s going on around us and what’s being said.”

Jeggo, who started in central midfield against the Saudis and acquitted himself well, defended the team’s record against stronger nations like Japan and Saudi Arabia. He said only small tweaks were needed for Australia to start winning those pivotal games upon which their qualification hopes rest.

“They’re two very good footballing nations. We more than held our own against these two teams,” he said.

“Parts of our performances against them have been really dominant – it’s just, especially at this level and against very good teams, it’s often small details that make the difference and decide games. 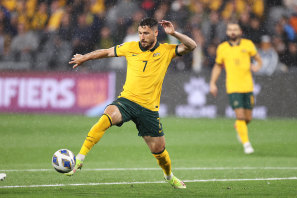 Mathew Leckie controls the ball on a wet night on Thursday.Credit:Getty

“And I think in both those games, it’s those phases and periods where we’re on top that we maybe haven’t capitalised on that. Against Saudi, that was definitely the case. A goal in the right moment can change a game.

“As a group, that’s where we are. What we’re doing and how we’re playing is on the right track. There’s room for improvement and we’re well aware of that. We know exactly what we need to improve on, and it’s about working on those and making sure we put them into practice as soon as possible.”

The Socceroos should be able to comfortably account for China, who are effectively out of the reckoning to qualify for the World Cup. They won 3-0 the last time they faced them in September, when Australia played their nominal home game in Qatar due to border restrictions.

Now the shoe is on the other food: the Chinese are the hosts this time around, but cannot play at home because of their own international travel policies. As such, Wednesday’s match will be played in Sharjah in the UAE.

“It’s definitely a big advantage playing at home, in front of a home crowd – we’ve experienced both sides of the coin on that, having played home games here in the Middle East and then having our first qualifier [in Sydney] against Saudi,” Jeggo said. “We witnessed it against Japan as well. It’s definitely an external factor that plays into our hands.”

Australia have two more full days to prepare for the China clash and should be able to call upon defender Trent Sainsbury, whom Jeggo said was training fully with the team despite rumours he had pinged a hamstring.

Losing Sainsbury would be another hammer blow for the Socceroos after his centre-back partner, Harry Souttar, went down with a suspected ACL injury late in the Saudi clash. The full extent of Souttar’s injury is still yet to be officially confirmed.