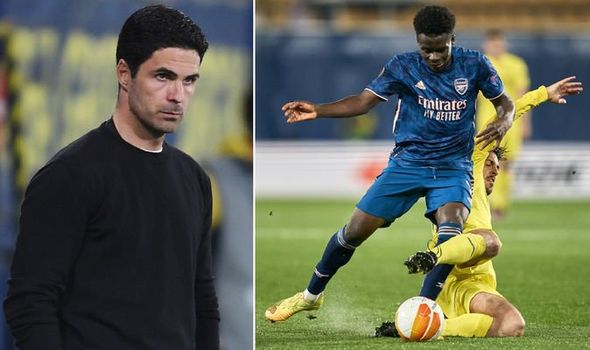 Mikel Arteta wants insists his Arsenal players need to ease their reliance on Bukayo Saka to carry them after the academy graduate shone in the Gunners’ 2-1 loss to Villarreal to give the Londoners a chance of reaching the Europa League final.

Arsenal endured a disastrous first hour at the Estadio la Ceramica with Manu Trigueros and Raul Albiol on the scoresheet for the hosts and appearing to put the La Liga side in full control.

It got worse for the visitors when the on-loan midfielder Dani Ceballos was dismissed for a second yellow card before the hour mark.

Bernd Leno, who made a mistake in last weekend’s loss to Everton, then made two vital saves including one from Gerard Moreno to keep the Gunners in the tie.

And they took advantage, winning a penalty through Bukayo Saka which Nicolas Pepe gratefully converted for his sixth European goal of the campaign.

Villarreal were down to 10 themselves when ex-Tottenham and Watford midfielder Etienne Capoue picked up a second yellow.

Capoue brought down Saka and picked up an injury in the process which saw him stretchered off the pitch to set up a frantic finale.

Arsenal could not muster an equaliser though, with Pierre-Emerick Aubameyang denied a last-gasp equaliser from their best chance after Thomas Partey’s through ball.

But Arteta and co. know a 1-0 victory at the Emirates next week would see them through to the final in Gdansk, most likely to face Manchester United who beat Roma 6-2 at Old Trafford at the same time the north Londoners were in action in Spain.

The Arsenal manager told BT Sport post-match: “I am confident we are going to have a chance to win that’s for sure.

“We didn’t want to come here and lose obviously but after the way the game developed, being 2-0 down with 10 men, you have to take the result.

“If you have to lose, this is probably the best result we could have. Two different halves.

“We started to be us [in the second half]. There were so many moments in the first half that we weren’t us. We disorganised ourselves and started to chase.

“We were not precise with the ball and not compact in the right spaces. We didn’t have enough control.

“We found good combinations but didn’t have enough threat and desire to attack the opponent’s box. In the second half it was completely different.”

Arteta added of Saka: “We are very used to that this season but that tells us we need to do much more in other areas. We cannot rely all the time on him.

“But we needed a moment of magic and he produced it again.”

And of Leno: “He was very good when we needed him at 2-0. The chance with Gerard was the biggest one they had. Leno saved us.

“At the end we had a big chance, Auba, one-v-one vs the keeper but we couldn’t draw the game.”

Stand-out performer Saka meanwhile said: “There’s a lot of positives which all came in the second-half. But it’s a semi-final, to start the game like this, it’s impossible to have a chance of scoring.

“We didn’t create anything, we lost every duel, we were passive. It’s really frustrating to look back on. I’m just happy that in the second half we picked ourselves up.

“We’ve given ourselves a chance at the Emirates. We showed that we’re better than them, even with 10 men, we dominated them. It’s up to us. It’s always up to us.

“We’ve got a squad full of quality players and when we play properly we can beat anyone. We showed that today.”

Before their second leg against Villarreal, Arsenal face Newcastle at St James’ Park on Sunday (7pm) but Arteta is expected to make a raft of changes to his team.