Arsenal boss Mikel Arteta’s perception of merit in football is the reason why he remains confident of his side’s progression despite their league position, and also why he believes things are not as bad as they seem at Liverpool.

Arsenal host Liverpool on Saturday, live on Sky Sports Premier League, with the Gunners in ninth and the defending champions in seventh.

Despite signs of improvement in recent weeks, Arteta’s side have developed a habit of making life difficult for themselves by conceding early goals, before salvaging results with impressive responses, as highlighted in the 3-3 comeback draw against West Ham.

The Arsenal boss says the mistakes, despite their frustrating regularity, are often completely self-inflicted and not a direct result of his tactical approach. Arteta remains confident in the progression of his team because they now merit winning most games overall.

“The fact that (opposition teams) are depending on us is a good factor, it means the problem is in our hands and we can stop it immediately. If we are able to do that it does not depend on the opponent,” Arteta explained.

“The other factor is that we can play at the level we did. We can come back against a top opponent from three goals down. It’s a sign of the character and quality the players showed (against West Ham). That’s the level we want to keep, if we want to find consistency in the league and Europe, those mistakes need to stop.

“That is part of the process and it has to happen, unfortunately. It happens more often than I want it to and it has cost us some points. The (mistakes) are not related directly to the way we want to play. They have been very individual things in many cases.

“But I consider the progression of the team, the way they are competing and playing, how the team merits winning more of the games, that is what we are looking for.”

Arteta also says Liverpool’s underlying performance and their merit to win games means Jurgen Klopp should not get too much criticism for the failed defence of their title.

On Liverpool’s troubles this season, Arteta commented: “We know each other better, the more you play an opponent the more you understand them. Everyone is looking to the top teams and Liverpool have been analysed more than any other team.

Arsenal mark the 20th anniversary of the passing of club legend David ‘Rocky’ Rocastle this week. Rocastle, who won two league titles and became an Arsenal icon during his career, passed away following a battle with non-Hodgkin’s lymphoma in March 2001, aged 33. 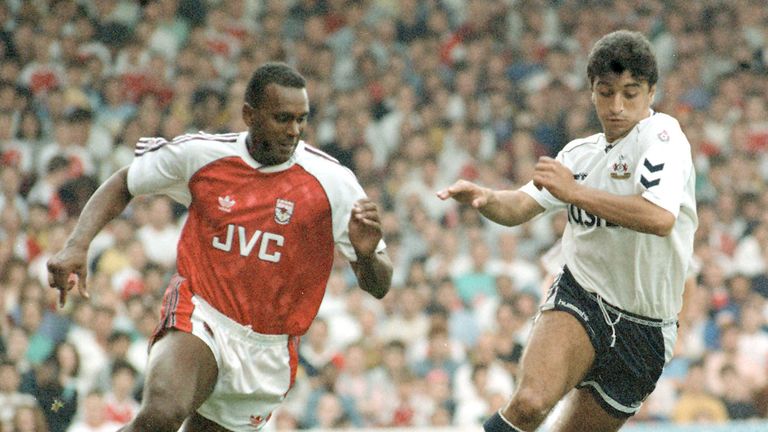 The matchday programme for Saturday’s game against Liverpool will guest edited by his family, with players wearing Rocastle shirts during the warm-up and a special banner set to be displayed at the Emirates Stadium.

The club created a leadership course this week in his memory that will benefit young people from the local community.

“My feeling is that he is present at the club, throughout our staff and our community, with the connection we have with his family,” Arteta responded when asked about Rocastle’s lasting legacy at Arsenal.

“He left a legacy because he is a legend. We need people like that to create history at a club like Arsenal. He was a role model, someone we want the next generation to look at.

“I think he gets what he deserves from all of us at the club. He was a very, very impressive individual.

“Around the club you can see him in pictures and hear about him in a lot of conversations. His figure, what he represents for a lot of people, it is very present in our community.

“We want him to be present for those who do not know a lot about our history. He is the type of person and footballer we want to have at the club.”

Arteta hopeful a social media boycott is not needed

Arsenal launched a #StopOnlineAbuse action plan as part of a collective effort within football aimed at combatting discrimination on social media and the club has vowed to work with governing bodies, clubs, and partners to eradicate it from the game.

It comes after former club captain and all-time top goalscorer Thierry Henry announced he would be closing his social media accounts due to a lack of regulation against racism and bullying.

Wales forward Gareth Bale has said he would be prepared to join a boycott after Rabbi Matondo and Ben Cabango were racially abused, while Declan Rice has revealed England’s players may discuss coming off social media in the future.

“Talking about Thierry, someone of his stature and history, when he makes a decision like that it’s because he has been reflecting on it for a while. There are a number of reasons to do that and we have to take it seriously,” Arteta continued.

“We are lucky at Arsenal we have a number of campaigns that support players and everyone against that abuse. Everyone has to jump on and eradicate that straight otherwise we are going to ‘kill’ the protagonists of the sport, the players.

“It is time to do something right now. We are not strict enough with what you can do on social media in terms of racist abuse and other things.

On his support for a potential social media boycott, were it ever to take place, Arteta said: “If we made the decision that it is best way to protect our club, our players and our staff – we will do so. Hopefully it can be eradicated just by being much more stronger and putting good laws in place.

“Social media is incredibly powerful if used in the right way, to get to our fans to get positive messages across, not the opposite. Hopefully we don’t get to that point.”