Paris Saint-Germain forward Lionel Messi and three other players at the club have tested positive for COVID-19, the French Ligue 1 club said on Sunday.

Defender Juan Bernat, back-up goalkeeper Sergio Rico and midfielder Nathan Bitumazala were the other players who returned positive tests. PSG said the four players were in isolation and subject to the COVID health protocols. 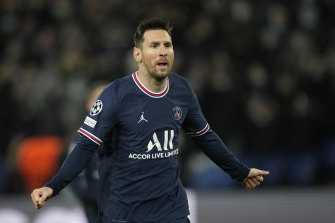 Mauricio Pochettino’s team are top of the Ligue 1 standings on 46 points after 19 matches, 13 points above second-placed Nice. They are due to travel to third-tier club Vannes on Monday for a French Cup round-of-32 match.

Pochettino said he was unsure if Messi, who is currently in Argentina, would feature in their next league game, at Olympique Lyonnais on January. 9.

“Messi has been in regular contact with our medical team and when he has a negative test, he will travel to France, but we don’t know any more than that. I don’t know if he will be involved against Lyon,” Pochettino said.

The Paris cases are the latest in a raft of positives to sweep through European football, playing havoc with draws and leading to the postponement of fixtures.

The French league has already postponed the game between Angers and Saint-Etienne on January 9 due to a high number of cases in the Angers squad.

Angers said there were 19 confirmed cases among its squad of 30 players and that more than 10 were not authorised to play again until January 10. A further five staff members also have the virus.

Angers had five players out with COVID-19 when it lost 4-1 at Montpellier on December 22 before the winter break.

In England, a continuing COVID outbreak at Newcastle led to Sunday’s game at Southampton being postponed. Newcastle’s previous game against Everton scheduled for Thursday was also called off.

The Premier League said a combination of COVID-19 cases and injuries meant 19th-place Newcastle did not have the required 13 outfield players and one goalkeeper available to face Southampton at St Mary’s.

The league said it made its decision in advance to provide clarity for clubs and fans.

It brings the total to 18 Premier League games postponed in the past three weeks, including last-place Norwich’s trip to Leicester on Saturday.

Meanwhile, Liverpool coach Juergen Klopp said on Friday that three of his players tested positive ahead of Sunday’s game at Chelsea.